The main peaks are for the following channel numbers,

Gamma Spectrum for U-233

The charge spectrum returned to were it was before the neutron exposure after 29 days for closed shutter. 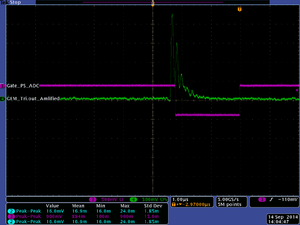 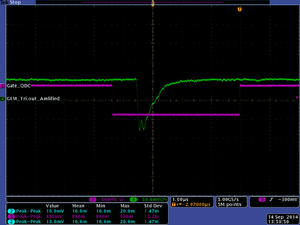 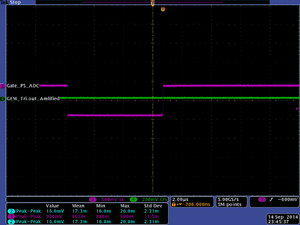 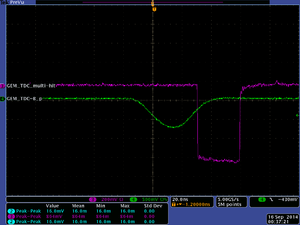 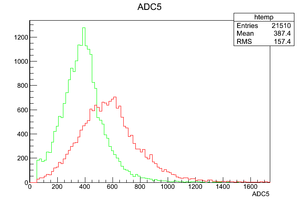 Changes from the former set up 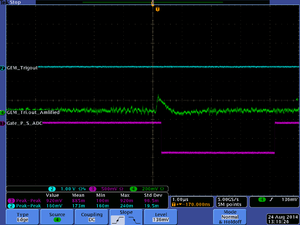 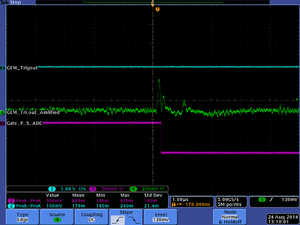 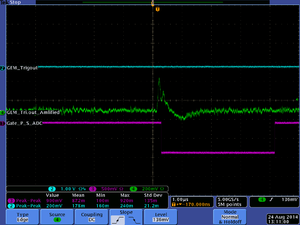 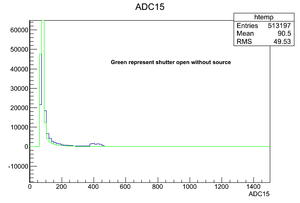 Changing the leading edge disc. to understand the Peak sensing and explain the cut int he peak sensing graph.

Measuring the noise. by starting by low signal rate to distinguish the signal from the noise.

Peak sensning measurements for GEM were recorded in the time between 8:00 am to 9:44am for shutter open as the following 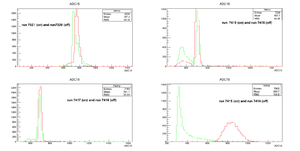 Different output for each run when Peak sensing is used to measure the charge, what is noticed that the charge is different from one run to another, but all the runs show that the amount of charge collected is bigger when the shutter is open with the source on it except for run 7511. By comparing all the runs, As the shutter is open, the maximum charge is collected by channel number 800, as the source is on the detector, the collected charge reached up to channel 1000 at most.

Measuring the data started by 8 am, the noise rate increased so it increased the event rate from 30s to 80s event/s, and it did not decrease until now (Thur. 15:36 08/28/14). all module wiring were checked but without any result. I am using the 90/10 Ar/CO2 bottle as hope to take some measurements but when the noise level goes down maybe this evening to repeat the same measuremnts. 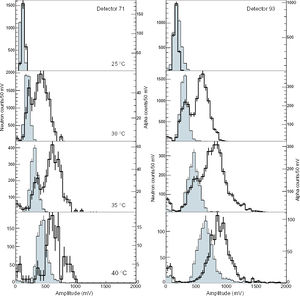 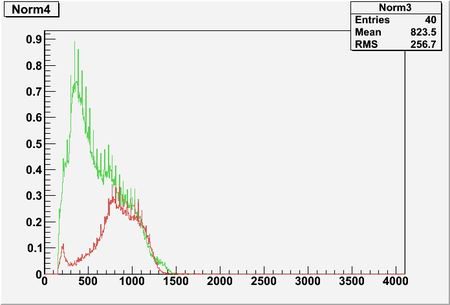 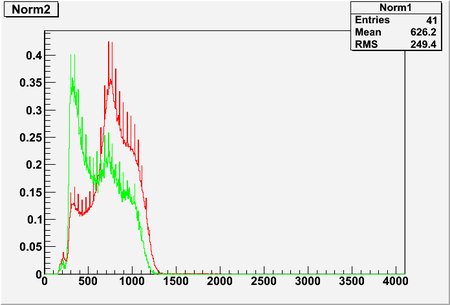 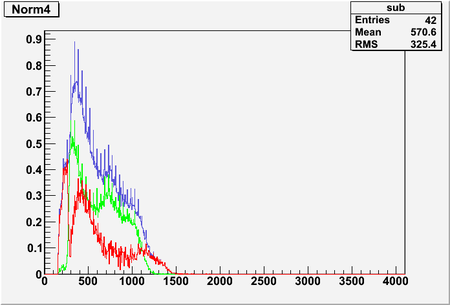 Ionization xsections for different particles emitted from U-233 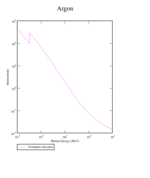 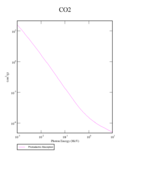 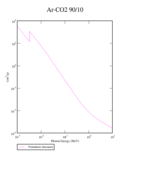 Coincidence Measurements for GEM and the Plastic scintillator

Coincidence Measurement for the scintillator PMT's without shielding and without source

Triple coincidence Measurement for the scintillator PMT's shielded and without source

Triple coincidence among the 2 PMT's and the GEM detector is measured using coincidence module caberra 2144 and ortec 778 counter, count rate is 0.3+_ 0.03 Hz. However, the rate was zero before shielding.

The following pics show The GEM output with triple coincidence signal, it is observed that different GEM peaks coincide with the triple signal, which shows that adding the shielding contaminates the neutron signal.

Coincidence Measurements for the Plastic scintillator after shielding

The above graph represents the change in the count rate of B_p, as the shutter is open (green) and as it is closed (red), the error bars get smaller since each point represents the average of two sets of daily measurements, in addition to, changing the PS discriminator's level after the second measurement.

The GEM detector was tested for signal and discharge as the voltage of the cathode and HV-circuit divider is 3.3 kV and 2.7 kV successively.

The GEM detector signal is observed as it used to work before. the pictures below show the signal detected as the shutter is open and as it is close.

GEM HV-divider circuit in shown in the figure, measurements were recorded for for top and bottom voltage of each preamplifier.

The table below shows value of the voltage on each preamplifier's side relative to ground.

The source voltage means the voltage value on the 4-channel CAEN N470 display. (suppose to be equal to the voltage of the top GEM1).

GEM and Sci. data and measuurements

GEM gain data graphs and GEM Calibration at the IAC

The detector is installed in the IAC after modifications took place in the detector design.

2- The distance of the cathode from the first GEM increased up to 1.2 cm. previously the distance was about 3.5 mm. (No change in GEM's distances 2.8mm, or the readout 0.5 mm)

Increasing the drift distance demands an increase in cathode potential to maintain the same values of the electric field in the old setup.

3- The detector is installed in a wooden box, in addition to a plastic scintillator which was placed to cover part of the detector window. 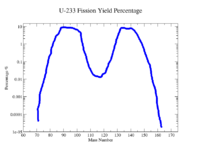 What is the energy distribution of Beta, Photon and alpha from U-233

Gamma distribution for U-233 and its daughters are in metioned in details in the documents , File:U233 day gamma.pdf <ref>http://www.radiochemistry.org/periodictable/gamma_spectra , Wed. 04/10/2013</ref>

The energy range of the emitted gamma is shown in the following table . 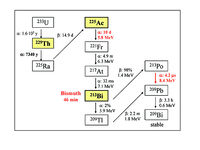 The following table shows the negative beta emitter nuclides,their parent nuclides, and their half lives:

What is the energy distribution after the 1 mm FR4 shutter

The energy distribution below represents the incidence electron on a 1 mm FR4 shutter.

Electrons (with least energy from U-233= 0.2 MeV) pass through the shutter have the energy distribution below.

Number of ions produced from Beta and Photon in ArCo2

EMTest10 is used to calculate the average number of ions (electrons) when a 101 beta of 1 MeV are fired in a world that contains ArCO2. (13.5 per primary electron).

The needed time to observe the GEM signal

Two new fully machined cards are going to be tested in air and ArCH4, if they passes 2000 V potential bwtween the top and the bottom, then they are going to be installed in ArCh4 gas chamber.

The older THGEM cards will have a high voltage enough to have one spark/min to clean impurities or surface defects.

The signal of the detector is observed as the shutter is open and close.

GEM's signal testing when it a long cable is used

The GEM signal is tested when a long cable is used to transfer the signal to the oscilloscope as the shutter is open, and without the cable. Oscilloscope pictures shows an attenuation to the signal up to 30%.

U-233 metal deposited source is measured by Protean Instrument corporation gaseous detector, has a model number of WPC9450 (serial number: 0915723)and uses (P10) gas mixture, as shown below:

The source was in a plate of a diameter of 16 cm which was exposed to to the sensitive part of the detector of a height of 2-3 mm.

where A is the count per second and W is the detector solid angle.

For the previous measurement, the solid angle is almost [math]2\pi [/math], so the the actvity of the source is twice the measured value in count/second.

One of the IAC experiments produces neutrons, the neutron spectrum from Tungsten target is simulated outside and inside water (moderator) as shown in the figure below

In the simulation above , They are interested in close distances to the Tungsten target inside the water container, it is 1 ft cubed container and is made of aluminium and covered polyester.

Media:Development and First Tests of GEM-Like Detectors With Resistive Electrodes.pdf

Uranium will ignite in powder form

Calorimeters/Detectors: DU sheet is in wide-scale use as an absorber material in high-energy physics research at large accelerator laboratories. The high atomic number and density of DU presents a large number of atoms per unit volume to interact with the particles emerging from collisions in these detectors. Also the slight background radiation from DU enables in situ calibration of the electronic read out devices within such detectors, thereby improving the accuracy of measurement.

1.) Can we mix resistive paste (Encre MINICO) with TH-232. We construct a "bed of nails" to place a predrilled G-10 board with a copper border. The nails fill in the holes of the G-10 to keep the paste out. Ecre MINICO is a resistive paste used for transistors.

a.) Get some resistive paste.

The data sheet does not show any information about the thickness of the paste.

Coating U-238 or Th-232 is essential for neutron detection in the range 2-14 MeV, but THGEM contains holes that should be protected from any coating material. So, a mask is designed to cover these holes. The holes are in drilled to be on the corners of hexagonal of 1mm side length as in the figure: 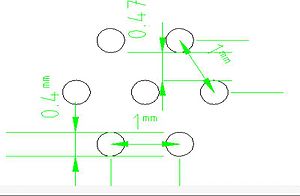 The mask is made of stainless steel, 10 um laser tolerance with cut the plate to get the shape in the figure: 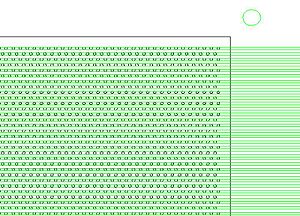 Please look at the following files for more details:

Make number bold black font. Add color so it is clear that they are holes in a material.

Performance of THGEM as a Neutron Detector