Difference between revisions of "Forest NucPhys I"

The interaction of charged particles (electrons and positrons) through the exchange of photons is described by a fundamental theory known as Quantum ElectroDynamics(QED). QED has perturbative solutions which are limited in accuracy only by the order of the perturbation you have expanded to. As a result, the theory is quite useful in describing the interactions of electrons that are prevalent in Atomic physics.

Nuclear physics describes how Atomic nuclei interact via the strong forces as well as how the strong force binds the constituents of a nucleus (protons and neutrons, a.k.a. nucleons). Particle physics studies the interactions of fundamental particles, particles without substructure like quarks, photons, and electrons. Both Nuclear and Particle physics rely on the "Standard Model", a field theory description of the strong, weak and electromagnetic forces. Quantum ChromoDynamic (QCD) is one component to the Standard Model which represents the fundamental theory developed to describe the interactions of the quarks and gluons inside a nucleon, analogous to how QED describes the electromagnetic forces of electrons within the atom. The electroweak and Higgs field are the remaining components to the Standard model. Ideally, QCD is a field theory which could be used to describe how quarks interact to for nucleons and then describe how those nucleons interact to form a nucleus and eventually lead to a description of how the nucleus interacts with other nuclei. Unfortunately, QCD does not have a complete solution at this time. At very high energies, QCD can be solved perturbatively. This is an energy [math]E[/math] at which the strong coupling constant [math]\alpha_s[/math] is less than unity where

The objectives in this class will be to discuss the basic aspects of the nuclear phenomenological models used to describe the nucleus of an atom in the absence of a QCD solution.

Rutherford interpreted the experiments done by his graduate students Hans Geiger and Ernest Marsden involving scattering of alpha particles by the thin gold-leaf. By focusing on the rare occasion (1/20000) in which the alpha particle was scattered backward, Rutherford argued that most of the atom's mass was contained in a central core we now call the nucleus.

Prior to 1932, it was believed that a nucleus of Atomic mass [math]A[/math] was composed of [math]A[/math] protons and [math](A-Z)[/math] electrons giving the nucleus a net positive charge [math]Z[/math]. There were a few problems with this description of the nucleus

The discovery of the neutron as an electrically neutral particle with a mass 0.1% larger than the proton led to the concept that the nucleus of an atom of atomic mass [math]A[/math] was composed of [math]Z[/math] protons and [math](A-Z)[/math] neutrons.

Although Cecil Powell is given credit for the discovery of the pion, Cesar Lattes is perhaps more responsible for its discovery. Powell was the research group head at the time and the tradition of the Nobel committe was to award the prize to the group leader. Cesar Lattes asked Kodak to include more boron in their emulsion plates making them more sensitive to mesons. Lattes also worked with Eugene Gardner to calcualte the pions mass.

Lattes exposed the plates on Mount Chacaltaya in the Bolivian Andes, near the capital La Paz and found ten two-meson decay events in which the secondary particle came to rest in the emulsion. The constant range of around 600 microns of the secondary meson in all cases led Lattes, Occhialini and Powell, in their October 1947 paper in 'Nature ', to postulate a two-body decay of the primary meson, which they called p or pion, to a secondary meson, m or muon, and one neutral particle. Subsequent mass measurements on twenty events gave the pion and muon masses as 260 and 205 times that of the electron respectively, while the lifetime of the pion was estimated to be some 10-8 s. Present-day values are 273.31 and 206.76 electron masses respectively and 2.6 x 10-8 s. The number of mesons coming to rest in the emulsion and causing a disintegration was found to be approximately equal to the number of pions decaying to muons. It was, therefore, postulated that the latter represented the decay of positively-charged pions and the former the nuclear capture of negatively-charged pions. Clearly the pions were the particles postulated by Yukawa.

The nucleus of an atom has such properties as spin, mangetic dipole and electric quadrupole moments. Nuclides also have stable and unstable states. Unstable nuclides are characterized by their decay mode and half lives.

Time scales for nuclear related processes range from years to [math]10^{-20}[/math] seconds. In the case of radioactive decay the excited nucleus can take many years ([math]10^6[/math]) to decay (Half Life). Nuclear transitions which result in the emission of a gamma ray can take anywhere from [math]10^{-9}[/math] to [math]10^{-12}[/math] seconds.

The following are resources available on the internet which may be useful for this class.

Particles are scattered in all directions. Typically you measure the number of scattered particle with a detector of fixed surface area that is located a fixed distance away from the scattering point thereby subtending a solid angle as shown below. 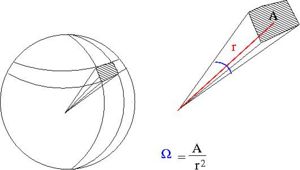 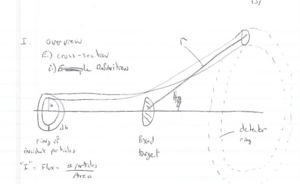 Note
the above definition is essentially an expression of how the low energy cross section corresponds to the classical value of [math]4 \pi a^2[/math]
[math]\sigma[/math] = scattering cross-section [math]\equiv \frac{\# particles\; scattered} {\frac{ \# incident \; particles}{Area}}[/math]
classically: the number of particles scattered = number of incident particles (the collision probability is unity)
Area = [math] \pi a^2[/math] = The area profile in which a collision occurs

From our previous phase shift calculation, Schrodinger solutions tend to have the general form

the angular part is given as

and the radial part is

To determine the scattering length we will be looking at [math]k \rightarrow 0[/math] so let [math]\hat{k}=0 \Rightarrow \theta=0 , \phi=0[/math] use the approximation

By equating the two solutions

In the case of a Deuteron bound state

Experimentally the cross section is quite a bit larger

If you sum up the two possible cross-section,[math] \sigma_S[/math] and [math]\sigma_T[/math], then you must weight them according to the possible psin compinations such that

The Nuclear Force is SPIN DEPENDENT

From the above we have found information on the range of the nuclear force, it's spin dependence, and it's ability to create non-spherically disrtibuted systems (quadrupole moments).

No matter what potential Well geometry we choose for the nucleon, we consistently find a term which is purely radial in nature (a Central term).

We know from the lack of a p-p [math](^2NHe)[/math] or n-n bound system that the nuclear force is strongly spin dependent. This is reenforced even more based on our observations of the S=1 n-p bound state (the Deuteron).

Experiments also indicate that parity is conserved to the [math]10^{-7}[/math] level. [math]\Rightarrow[/math] experiments with an relative precision of [math]\frac{\Delta X}{X} \gt 10^{-7}[/math] have yet to find a parity violation.

[math]\Rightarrow[/math] The spin potential would have terms involving spin scalar quantities because a spin potential with terms that are linear combinations of spin would violate parity.

Given the basic elements of the nuclear potential from the last chapter, one may be tempted to construct the hamiltonian for a group of interacting nucleons in the form

If you assume that the nuclear force is a two body force such that the force between any two nucleons doesn't change with the addition of more nucleons, Then you can solve the Schrodinger equation corresponding to the above Hamiltonian for A<5.

The low lying excited energy states for Sn-130 taken from the LBL website are given below.

Bohr and Mottelson considered the nucleon in terms of its collective motion with vibrations and rotations that resembled a suspended drop of liquid.

Basically everything before section 5.3 (The Nuclear Force). Section 5.3 and below is not included on the midterm.

Formulas given on test

1.) Calculate the magnetic moment of a proton assuming that it may be described as a neutron with a positive pion [math](\pi^+)[/math] in an [math]\ell =1[/math] state.

2.) Show that the phase shift ([math]\delta_0[/math]) for the scattering of a neutron by a proton can be given by the equation

a.) Write the reaction equations for the following processes. Show all reaction products.

b.) Determine the Q-values for the first two reactions above.

6.) Use the shell model to predict the ground state spin and parity of the following nuclei: