If there is no potential field (V(x) =0) then the particle/wave packet is free. The wave function is calculated using the time-dependent Schrodinger equation:

Such second order differential equations have general solutions of

Now put everything together

Break these types of problems into regions according to how the potential is defined. In this case there will be 2 regions

When x<0 then V =0 and we have a free particle system which has the solution given above.

The time dependent part of the problem is the same as the free particle solution. Only the spatial part changes because the Potential is not time dependent.

If [math]E \gt V_o[/math] then we have a wave that traverses the step potential partly reflected and partly transmitted, otherwise it will be reflected back and the part that is transmitted will tunnel through the barrier attenuated exponentially for x>0.

Here is how it works out mathematically

The above Diff. Eq. is the same form as the free particle but with a different constant

We now have a system of 2 equations and 4 unknowns which we can't solve.

The coefficient A represent the incident plane wave on the barrier. The remaining coefficients B and C represent the reflected and transmitted components of the traveling wave, respectively.

Evanescent waves
Waves like [math]\psi_3[/math] which carry no current. There is a finite probability of penetrating the barrier (tunneling) but no net current is transmitted. A feature which separates Quantum mechanics from classical.

If we treat [math]A[/math] as being known (you know the incident wave amplitude) then we have 4 unknowns (B,C,D, and F) and the 4 equations:

To find the ration of F to A

for C and D

What is the solution to Schrodinger's equation for a potential V which only depends on the radial distance (r) from the origin of a coordinate system?

which we can also write as

In the region where V=0

Then we have the "spherical Bessel"differential equation with the solutions: 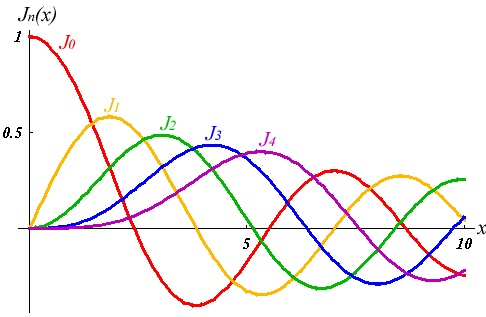 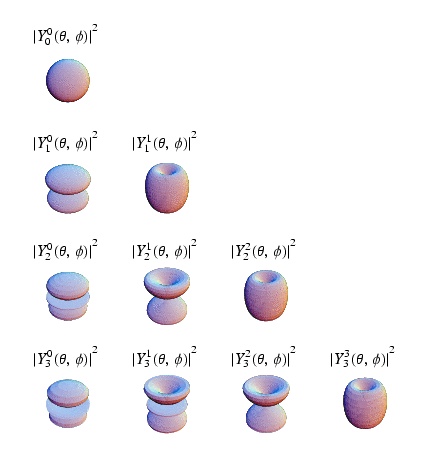 To find the Energy eignevalues we need to know the value for "k". We apply the boundary condition

to determine the "nodes" of [math]j_l[/math]; ie value of [math]ka[/math] so if you tell me the size of the well then I can tell you the value of k which will satisfy the boundary conditions. This means that "k" is not a "real" quantum number in the sense that it takes on integral values.

We simple label states with an integer [math](n)[/math] representing the [math]n^{th}[/math] zero crossing via:

The potential for a Simple Harmonic Oscillator (SHM) is:

This potential is does not depend on any angles. It's a central potential. Our solutions for Y_{l,m} from the 3-D infinite well potential will work for the SHM potential as well! All we need to do is solve the radial differential equation:

If you construct the solution

Assume R(r) may be written as

substituting this into the differential equation gives

After performing the power series solution; ie find a recurrance relation for the coefficents a_i after substituting into the differential equation and require the coefficent of each power of r to vanish.

You arrive at a soultion of the form

these polynomials are solutions to the differential equation

if you do the variable substitution

The following table gives you the Radial wave functions for a few SHO states:

The Coulomb potential is defined as :

This potential does not depend on any angles. It's a central potential. Our solutions for [math]Y_{l,m}[/math] from the 3-D infinite well potential will work for the Coulomb potential as well! All we need to do is solve the radial differential equation:

Use the change of variable to alter the differential equiation

Then the differential equation becomes:

Bound state also imply that the eigen energies are negative

The general solution for this type of Diff Eq is

substitute this power series solution into the differential equation gives

with the recurrance relation

or since \lambda is just a dummy variable

As you may have noticed in the quantum solution to the coulomb potential (Hydrogen Atom) problem above, the quantum number [math]\ell[/math] plays a big role in the identification of quantum states. In atomic physics the states S,P,D,F,... are labeled according to the value of [math]\ell[/math]. Perhaps the best part is that as long as there is no angular dependence to the potential, you can reused the spherical harmonics as the angular component to the wave function for your problem. Furthermore, the angular momentum is a constant of motion because the potential is without angular dependence (central potential), just like the classical case.

since [math]\ell[/math] has its origin in

and the uncertainty principle has

where [math]\phi[/math] characterizes the location of [math]\ell[/math] in the x-y plane.

As a result, the convention used is to define quantum states in terms of [math] \ell_z[/math] such that

This means that [math]m_{\ell}[/math] represents the projection of [math]\ell[/math] along the axis of quantization (z-axis).

The Stern Gerlach experiment showed us that electrons have an intrinsic angular momentum or spin which affects their trajectory through an inhomogeneous magnetic field. This prperty of a particle has no classical analog. Spin is treated in the same way as angular momentum, namely

In spectroscopic notation where [math]\ell[/math] is labeled by s,p,d,f,g,... the value of j is added as a subsript

In Atomic systems, the electrons in light element atoms interact strongly according to their angular momentum with their spin playing a small role (you can use separation of variables to have [math]\psi = \psi(r)\psi(s)\psi(\ell)[/math] . In heavy atoms, the spin-orbit ([math]j[/math]) interactions are as strong as the individual [math]\ell[/math] and [math]s[/math] interactions. In his case the total angluar momentum ([math]j[/math]) of each constituent is coupled to some [math] j_{tot}[/math], you construct [math]\psi = \psi(r) \psi(j)[/math]. When there is a very strong external magnetic field, [math]\ell[/math] and [math]s[/math] are even more decoupled.

Parity is a principle in physics which when conserved means that the results of an experiment don't change if you perform the experiment "in a mirror". Or in other words, if you alter the experiment such that

the system is unchanged.

Then the potential (V(r)) is believed to conserve parity.

The Radial wave functions [math](R_{n,\ell})[/math] of the 3-D SHO oscillator problem can be either positive or negative parity.

The conclusion is that the total wave function [math]\psi=R_{n,\ell}Y_{\ell,m}[/math] is positive under parity.

In 1957, Chien-Shiung Wu announced her experimental result that beta emission from Co-60 had a preferred direction. In that experiment an external B-field was used to align the total angular momentum of the Co-60 source either towards or away from a scintillator used to detect [math]\beta[/math] particles. She reported seeing that only 30% of the [math]\beta[/math] particles came out along the direction of the B-field (Co-60 spin direction). In a mirror, the total angular momentum of the Co-60 source would point in the same direction as before ([math]\vec{\ell} = \vec{r} \times \vec{p} = \vec{(-r)} \times \vec{(-p)})[/math] while the momentum vector [math](\vec{p} = -\vec{(-p)})[/math] of the emitted [math]\beta[/math] particles would change sign and hence direction.

For a stable particle its wave function will be in a stationary state that is static in time. This means that if I measure the average energy of this state I will see no fluctuation because the state is stationary.

The implication of this using the uncertainty principle is that

Or in other words quantum states with [math]\Delta E = 0[/math] live forever.

If a quantum state has [math]\Delta E \ne 0[/math] then it is possible for the quantum state to change (particle decay) within a finite time.

by the uncertainty principle we would expect that the [math]\Delta(1232)[/math] particles mean lifetime would be about[math] 6 \times 10^{-24}[/math] seconds.

The energy uncertainty [math]\Delta E[/math] is often referred to as the width [math]\Gamma[/math] of the resonance. Below is a plot representing the missing mass (W) of a particle created during the scattering of an electron from a proton. At least two peaks are clearly visible. The highest and most left peak has a mass of about 1 GeV representing elastic scattering and the peak following that as you move to the right represents the first excited state of the proton. 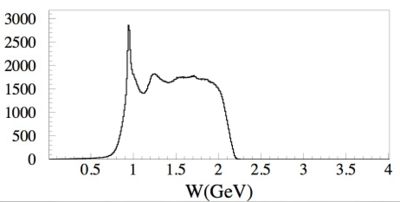 The gaussian shape of the [math]\Delta[/math] "bump" shows how this state does not have a well defined energy but rather can be created over a range [math]\Delta E[/math] of energies. The "Width" ([math]\Gamma[/math]) of an exclusive distribution determined a fit to a Breit Wigner function like