Quantum Chromodynamics (QCD) is the fundamental quantum field theory within the standard model that is used to describe the Strong interaction of the fundamental particles known as quarks and gluons, the constituents of a nucleon, in terms of their color. While the Strong force acts directly on the elementary quark and gluon particles, a residual of the force is observed acting between nucleons within an atomic nucleus that is referred to as the nuclear force. The degrees of freedom needed to describe the elementary particles within an average Atomic nucleus with A=50 makes a solution difficult. As a result, a phenomenological approach is used (i.e.: models) to describe nuclear physics processes. Below are some of the static properties of a nucleus that a quantum field theory or model would need to predict.

These properties are explored further in the sections below.

Once you know the Isotope then you know how many protons are in the nucleus of interest and therefore the charge.

The interest however is in how that charge is distributed inside the nucleus.

The density of nucleons within the nucleus tends to be uniform over a short distance and then rapidly goes to zero. There are two quantities which are used to characterize nuclear size.

One of the first ways to measure the nuclear radius was to look for the failure of Rutherford scattering. Since Rutherford scattering only considers the coulomb repulsion of two charged object, one could assert that the physics changes when measurements of the scattered particles fail to obey the Rutherford prediction.

The modern value for the gold nucleus is 7.2 fm. 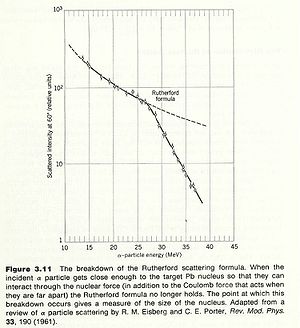 One direct method used to determine the size of an object in to alter the size of a probe until interference patterns emerge (ie [math]\lambda \lt D[/math]). 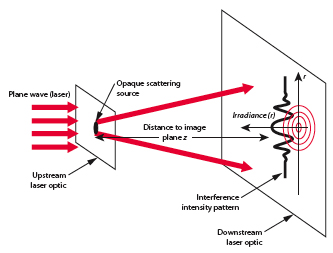 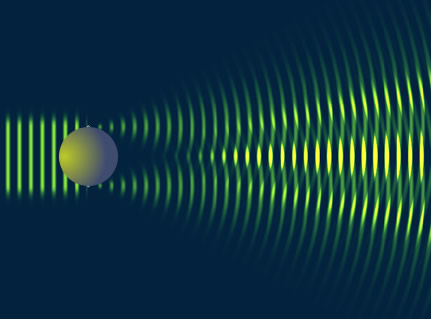 By virtue particle wave duality, the elastic scattering of an electron from a nucleus can behave in a similar fashion to the scattering of light by an opaque target. 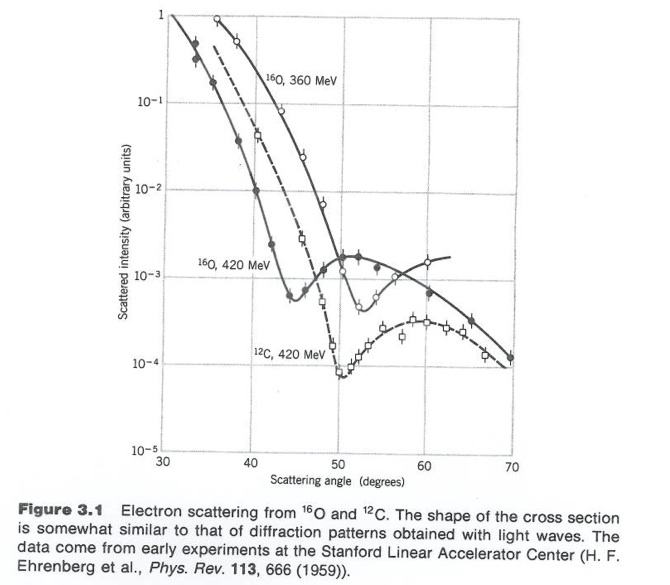 Although 3-D objects reveal diffraction patterns that are similar to those from a two dimensional disk, such comparisons are really only rough estimates. As we saw from the above, the scattering of photons from O-16 revealed a diffraction pattern. A similar diffraction pattern can be seen if you elastically scatter electrons from a Pb-208 nucleus.

For our current interest we would like a means to measure the distribution of charge in the nucleus of an atom. This can be accomplished by elastically scattering a probe off of the nucleus which is sensitive to charge. Elastically scattering an electron off of a nucleus is one such probe. A description of this can be found using Fermi's Golden Rule where the transition amplitude

is the main term in Fermi's Golden Rule which describes the interaction that takes place.

In our current example we have an incident electron plane wave in some initial state which gets elastically scattered by some charge distribution (a nucleus) to a final plane wave state by means of a coulomb interaction.

The inverse Fourier Transform would be

The data below are the result of such measurements. 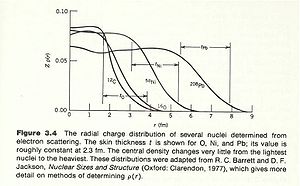 Take the derivative of F(q) with respect to Q then you get a slope of the function. The slope of this function near the origin(q=0) tells you the mean charge radius squared. Making these electron scattering measurements on several different nuclei has revealed a cubed root relationship between the radius and the atomic number A. 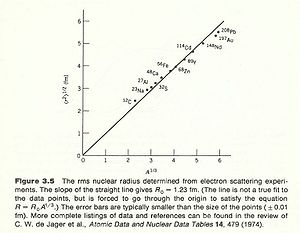 Another method employed to measure the charge radius of a nucleus involves a measurement of the K X-rays produced by 2 different isotopes of the same atom.

A "K X-ray" is the photon given off when and electron undergoes a transition from the 2P orbit to the 1S.

This assumes that the energy difference [math]= E_{1S}(A) - E_{1S}(A^{\prime})[/math] is a lot bigger than the difference for the 2P electrons. Since the energy difference we are investigating is caused by the 1S electron spending some time inside the nucleus sampling the nucleus' charge distribution, one can assert that the higher energy 2P electrons state spends substantially less time sampling the nuclear charge distribution.

Use the coulomb potential to calculate the change [math]\Delta E_{1S}(A)[/math] in the electron energy eigen value when the nucleus is given a finite instead of being point like.

An electron which has a finite probability of existing within a finite size nucleus, of radius [math]R[/math], will feel a different coulomb potential when it is inside than outside. This possibility of having an electron spend some time inside the nucleus effectively changes its energy eigenvalue by an amount [math]\Delta E[/math]. This change in energy is

When the electron is outside the nucleus

The K X-ray isotope shift is:

From electron scattering experiments we found that 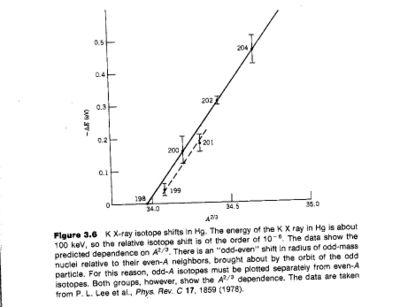 Using wave functions which account for relativistic effect moves the prediction into agreement with experiment.

The experiment has been improved by using muonic atoms. A muonic atom has a muon in place of the electron. Because of its higher mass the muon has a tighter "orbit" , the muon isn't really orbiting the nucleus, and has a higher probability of being inside the nucleus thereby being more sensitive to the charge distribution. The X-rays emmited by muons cascading down the energy levels are in the MeV range while electrons are in the keV range. 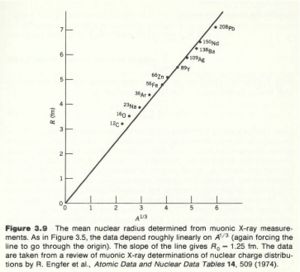 Yet another method to determine the radius of a nucleus considers the impact of the coulomb force on the binding energy of Mirror nuclei. Mirror nuclei are two nuclei with the same number of nucleons but different number of protons and neutrons such that the number of protons (Z) in one nucleus is equal to the number of neutrons(N) in the other nucleus. For example He-3 (Z=2,N=1) and H-3 (Z=1, N=2). The difference in the coulomb binding energy of such mirror nuclei can be used to determine the radius of the nuclei.

If we assume the nucleus is a uniformly charge non-conducting sphere, then the "self energy", or the energy needed to assemble the charge distribution can be found using the work energy theorem for conservative forces.

[math]W = -\Delta U =[/math] Work -Energy Theorem :work needed to assemble a charge distribution which corresponds to a potential energy U = qV

The potential energy for the assembled charge distribution would be

The graph below is from Krane's book 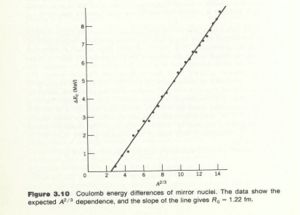 The above electron probe is a fine way to measure charge distribution in a nucleus. A nucleus however does contain uncharged nucleons known as neutrons. Neutrons do have a charge distribution, more positive core to a more negative surface charge. In order to measure the distribution of nuclear matter you will need to use a probe which depends more on the strong force and less on the electromagnetic.

Mesons (pions) are used in a manner similar to the use of muons by looking at the X-rays emmited as they cascade down the energy levels. A meson interacts with the nucleus through both the Strong and E&M forces.

There are 3 ways to characterize the nuclear shape

The binding energy of a nucleus is defined as the mass difference between the constituents of a nucleus and the nucleus.

If you make a plot of B/A -vs- A for ground state nuclei you would see something similar to the curve below.

As seen in the above graph, the ratio of B/A is almost a constant 8 MeV until you start to get to low A (A<9). As we saw previously, the density of nucleon inside the nucleus appears to be constant until you get to the edge.

or in other words the atomic number [math]A[/math] is proportional to the volume of the nucleus. At first glance you can imaging the the nuclear force acting on a group of A nucleons would be proportional to [math]A^2[/math] thinking any given nucleon is experiencing a force from all the other nucleons. Based on the above graph you expect the binding energy to be proportional the the Atomic number, suggesting that the strong force is so short range that nucleons really only see their nearest neighbor.

which leads a reduction in the binding energy

If Z is not half of A then you the nucleus is less bound (more unstable). So your expect a functional dependence like

to appear such that

Note
You may see the asymmetry term sometimes written as

one functional form used for [math]\delta[/math] is

The sign of [math]\alpha_p[/math] changes depending on if [math]Z[/math] and [math]N[/math] are both even or both odd.

The semi-empirical mass formula takes the definition of binding energy B(Z,A), solves for the mass of the nucleus, and then inserts the binding energy fit equation.

and solve for the nucleus mass 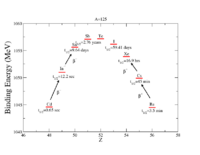 Consider the case of a proton orbiting around a nuclear shell

[math]\Rightarrow[/math] Perhaps the proton and neutron are not point particles!

Fermi Momentum/Energy represents the amount of energy a nucleon (proton or neutron) has when confined to a nucleus. One way to determine this energy is to approximate the nucleus as a 3-D infinite potential well in the form of a cube of side L.

From the 1-D infinite potential well problem you have the eigenfunctions (wave functions) and eigenvalues:

with [math]n[/math] being a positive integer of quantization.

The three dimensions are independent and thus separable allowing the total wave function and energy eigenvalues to be written as:

Note
An atom with atomic number [math]A[/math] identified by the Chemical symbol [math]X[/math] with [math]Z[/math] protons has [math]A-Z[/math] neutrons is denoted as [math]{A \atop Z} X[/math]
in this case N = A = number of nucleons (fermions) in the system (box).

The nucleons in the system occupy occupy the lowest energy state ([math]E_{f}[/math]) which forms a sphere in momentum space of radius [math]n_f[/math].

In this ground state the number of nucleons ([math]N[/math]) is equal to the number of states within the sphere of radius [math]n_f[/math] in momentum space. In momentum space, the quantum numbers (n_x, n_y, and n_z) are all positive integers. This means that only 1/8 of the sphere is occupied. Each state can hold 2 spin 1/2 nucleons and still obey the Pauli principle.

so the Fermi energy is given by

Which results in a relationship between the fermi energy and the number of particles per volume (when we replace L2 with V2/3):

The Nuclear size/radius of the nucleus is roughly:

The number density of nucleons in a nucleus is therefore:

So the fermi energy of a nucleus is about:

Note: in reality the neutrons and protons are independent systems so I have over counted the total energy when integrating over A.