The gaseous medium inside a detector's chamber contains different physical processes as a particle arrives the gas. When the desired particles penetrate the gaseous medium, they directly or indirectly (neutron fission) ionize the gas. If the event happened in the active detection area of the detector, a drift electric field guides the primary and secondary electrons toward the GEM preamplifiers, These preamplifiers are placed to have a separation distance within a limit to not lose the electrons by keeping their diffusion to be a reason for their multiplication . An electron avalanches appear and the negative voltage directs them toward the read out plate which collects the electrons to show them as negative pulses on the oscilloscope's screen. Electron recombination, deattachment and capture take place in every stage in the electron trip before they reach the readout plate. The output signal is important to measure the detector's performance by determining its efficiency, dead time, gain, spatial resolution and robustness.Theoretically, the detector output can be evaluated by solving Boltzmann equation that considers the effect of each physical process occurred.

Ionization is the liberation of an electron from the medium's atoms or its molecules. The minimum amount of energy required to liberate the electron is referred to as the ionization energy. When the ionizing particle gets in the medium, it deposits its energy to scatter free electrons which they get their kinetic energy after losing part of their energy in releasing from the atom confinement, and after passing through electron-electron collisions. For instance, charged particles like fission fragments ionizes the medium and scatter free electrons, the kinetic energy depends on the fission fragment's energy gained after ionization and the number of collisions the electron passes through.

The ionization is a stochastic process, it depends on the ionization cross section that is determined by the ionizing particle energy, and mass(heavy or light in case of fission fragments). However, the amount of energy needed to have an ionization event on average is the same, regardless of the incident particle type or energy as shown in the following table for argon gas.<ref name="Veenhof"> R. Veenhof, Internal Note/TPC, ALICE-INT-2003-29 version 1.0, 2003</ref>

Ionization by a fission fragment is not the only source for free electrons and it is not the only ionization process in fission chamber. Fission chambers usually contain neutoron fissinable materials, they are heavy radioisotopes that decay and emit more than one type of the ionizing radiation or by their daughters after decay. For instance, when the fission chamber contains U-233, free electrons are detected because of escaping fission fragments, alpha particles, beta particles, or gamma rays. More specific details about U-233 decay products is shown by the following tables:

To count the free electrons produced by the fission fragments demands some modifications in the detector design which mentioned in details in detector construction section .

They are other physical processes occur in the medium which are related to the gas mixture properties such as: photoionization, thermal ionization, deionization by attachment (negative ion formation) , photoelectric emission, electron emission by excited atoms or positive ion,penning ,and field emission <ref name="Kuffel"/>. The previous processes may share in decreasing or increasing the number of free electrons in the medium, so evaluating the number of free electrons before preamplification becomes sophisticated without a computer simulation.

Garfield simulates the ionization in the gas mixture cosidering all the former physical processes, it has the ability to simulate the electrons multiplication by GEM preaplifiers, it accepts external solutions for the electric field by other software packages like ANSYS, and it has more than one package such as Magboltz, HEED, and Imonte 4.5 that can be used for more precise simulations <ref name="Veenhof"/>.

Studying diffusion and mobility of charged particles in a gas is classified in to two main groups, ion and electron diffusion and mobility. They are conceptually similar, but they have many differences. First, The ratio between the mass of the electrons and the gas atoms is very small, so with a few eV work done by the electric field, the electrons will gain a high velocity compared to that of the ions that are accelerated under the same electric field. Also, the probability of low energy electrons to make an interaction is higher than that of the low energy ions, the electron interactions are a supported with accurate calculations for the electron drift velocity. Electrons at low energy have the ability to produce vibrations and excitations in the gas atoms or molecules which are measured within the lab frame, but low energy ions have very low cross sections for most of the interactions with a gas atoms or molecules. When interactions happen, a complexity appears in measuring the ion interactions' products, but the calculations are simpler for the velocity distribution for the electrons in many gases, since the ratio between a gas atom or molecule mass to the electron mass is very small. Since Producing electrons is simpler than producing ions in a gas, many interactions are responsible for producing electrons, such as thermionic emission, photoemission, or radioactive decay. On the other hand, creating an ion requires electron bombardment, photo-ionization or an electric discharge which requires more sophisticated conditions for the experiment and they are not as sensitive as the electrons for the the non-uniformity of the electric field, electric potential and magnetic field. Finally, the existence of the impurities is always a concern; the ions lose most of their energy in the molecular level, but the electron energy loss within the atomic level in a pure gas, as a result, the ionic velocity distribution is not affected by the existence of these impurities except for some cases related to a highly accurate ionic studies in gases.

Decreasing the discharge in THGEM

GEm and THEGM preamplifiers are designed to be rebust, economical, and to get the maximum gain with the least discharge effect. 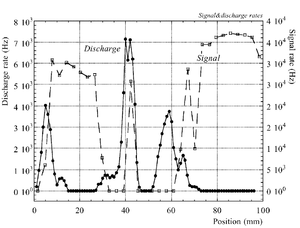 Fig. Discharge rate and the detected source rate can be represented as function of position <ref name="bachmann"/>

Producing these sparks refers to many reasons,it is obviously observed when a highly ionizing ion passes through the gaseous chamber and produces enough free electrons to break down the rigidity of surrounding gas by having an avalanche size exceeds Raether limit ( [math] 10^7[/math] electron-ion pairs) when separating the electrodes vertically with small a distance <ref name="bachmann"> Bachmann et al NIM A 479 (2002) 294-308 </ref > .

Temperature, humidity, and gas flow externally affect the probability of the transition from the proportional multiplication to a discharge at a given potential, the effect clearly appears in absence of the amplification internal effects as the design quality and the history of the electrodes <ref name="bachmann"/>.

In case of heavily ionizing ions like alpha particles, an increase in gain causes the probability of discharge to increase, but the increment in the probability of discharge can be decreased by choosing an appropriate gap between the THGEM cards <ref name="bachmann"/>. As a result, achieving a maximum gain for an incident particle on a chamber with a specific gas mixture ,under a voltage applied on the THGEM cards, requires an appropriate distance that increases with increment of the ionization rate, i.e an alpha particle requires a bigger gap between the THGEM cards than that of a gamma ray to avoid the discharge effect.(can be experimentally proven). 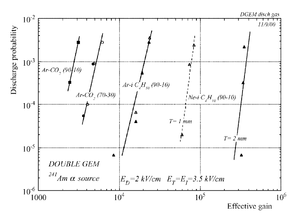 Experimetally, GEM and THGEM have similarities in factors that increases discharge in radiation harsh environment. Being charge preamplifiers requires a high voltage provided by a voltage divider network which does not have resistors of order of hundred Mohm. Setting the power supply to the maximum current limit causes a discharge,indeed high network resistors up to hundreds of Mohm may limit the effect fo the returning current which will casue less discharge in the GEM or THGEM. Generally, the HV-circuit divides the voltage for triple GEM based detector in away that the voltage difference between the top and bottom of of the first preamplifer is 10% more than the second, and the second preamplifer is 10% more in voltagethan the third one to avoid the discharge effect throught the detector operaion.

In some gases, The highest gain value ,in presence of heavily ionizing radiation, is affected by the gap between the THGEM cards due to the photon feedback mechanics.<ref name="Bachmann"> Nucl. Inst. and meth. 479 (2002) 294-308 </ref>.

Photon feedback: emission and re-absorption of the photons in the gas or in the metal's surface.

2- Negative differential conductivity: An effect is observed when the increase in electric field density ratio leads to a decrease in the drift velocity. "NDC was found to be favoured by increasing momentum transfer and decreasing inelastic cross sections and the balance of different processes affecting it can be put into a condition which is relatively accurate". it observed in argon mixtures.

Physical parameter and its eefect on the detector properties

Boundary Element Method is used to solve Laplace or Poisson Equation, a function u(x,y,z) is solved on the domain boundary and the function partial derivatives are evaluated by integrating on the number of elements on the boundary.<ref name="Kuffel"> Kuffel, W. S. Zaengl, J. Kuffel, High voltage engineering: fundamentals, Biddle Ltd, 2nd edition, 2000 </ref>.