The VPI postamp has an adjustable gain on the TDC output. The peak to peak pulse amplification ranges approximately from x2 to x10. The ratio of the area under the pulse in case of minimum amplification is about 8.96 and in case of maximum it is ~ 650. 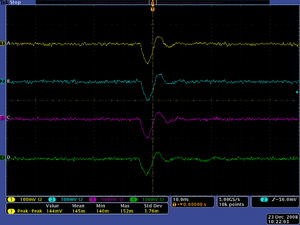 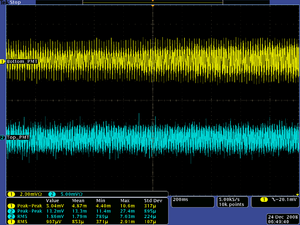 Mini DCs and GEM detectors are sandwiched between the two PMTs. The top scintillator is operated at 1050 Volts and bottom one-1000 Volts.


The coincidence pulse from two PMTs is used as a trigger and gate for GEM and DCs.

The PreAmp voltage on DCs is set to 6.4 Volts, the pulse form DC is amplified using PostAmplifier(amplification is on maximum). The TDC output of the amplified pulse is discriminated using the Leading Edge Discriminator and putted to the NIM-ECL converter, which than goes to the TDC(VME). The ADC output of the PostAmp was used for ADC(VME).

The GEM ADC measurements from the last cosmic run do not show a GEM signal while the DC has a clear ADC signal. Is the GEM output in time with the ADC gate?

I only saw one GEM signal from Trig out when triggering the scope on the bottom scintillator. It looked like 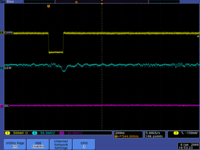 Some drift chamber signals start hat before the gate suggesting there is too much delay on the gate line. 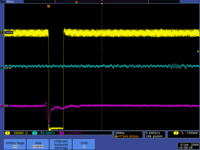 I observed more DC signals from channel 7 than GEM trigger signals when I triggered the scope on the bottom scintilator. Could the GEM gain/efficiency be substantially lower than the DC?

When running with HRRL electrons we should probably set the HV for each detector so they have the same rate.

Next week let's do plateau measurements, change HV and measurements cosmics for 1 day to plot rate -vs- voltage

Mac will double check his calculations for the correct sense wire HV.

The efficiency for Plastika (ADC24) seemed to track with Metalik's efficiency even though the HV on Metalika was changing while Plastica's HV stayed constant. We believe we are still in the plateau region and should make measurements with a sense wire voltage less than 1350 Volts. 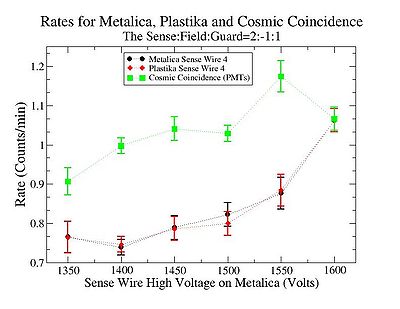 The previous efficiency measurements seems to all be still on the plateau. We need to change the Guard voltage to be 70% of the Sense wire voltage instead of 50%.

Let's set Plastika to those voltages as a control and change Metalika's voltage maintaining the S:F:G=1:-0.5:0.7. Let's try going to lower voltage first. 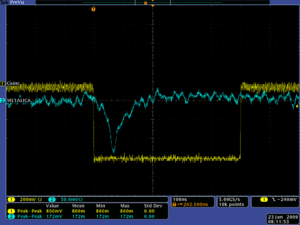 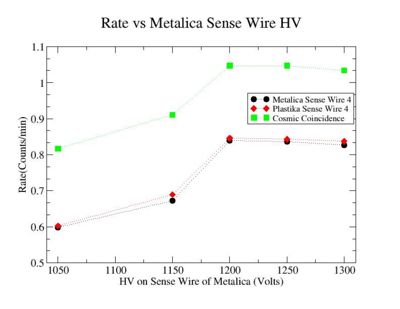 For these measurements, the high voltage on Plastika was fixed to (S:F:G=1400:-700:980) and the HV on Metalica was changed preserving the HV ratio (S:F:G=1:-0.5:0.7). The output from sense wire 4 was measured for these plateau measurements. The signal from the DCs(Plastika and Metalica Sense Wire 4) was sent to the UVA 122B Signal Splitter on channels 2(Metalica) and 15(Plastika), after that the output is sent to the VPI PostAmp. The Amplified pulse(amplification for Plastika and Metalica is about x10), from channel # 16 for Metalica and channel # 3 for Plastika, is discriminated using LeCroy Octal Discriminator Model 623B. The discriminator threshold was changed only for Metalica, for Plastika it was set to 300 mV, for whole run.

We would expect to see a plateau curve which looks like 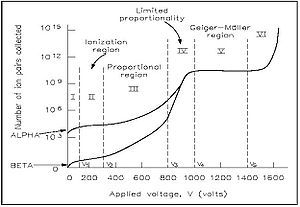 We had the following observations for the Baby chambers 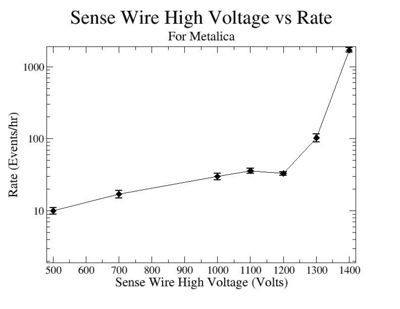 Does this mean we have not entered the Geiger Muller region or is noise impacting the low HV measurements? 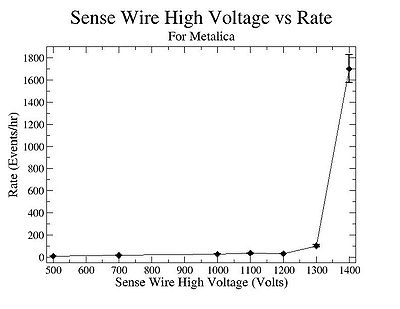 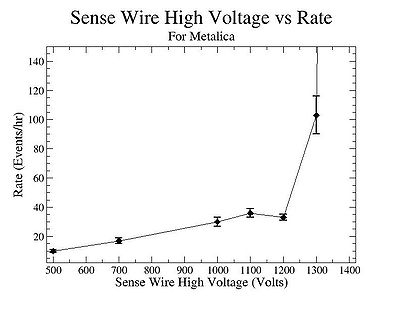 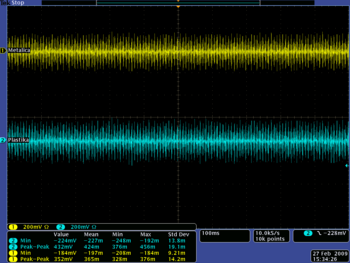 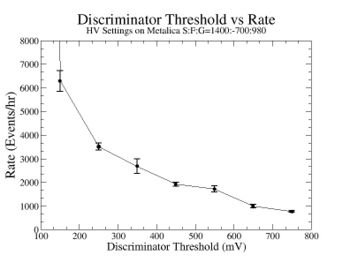 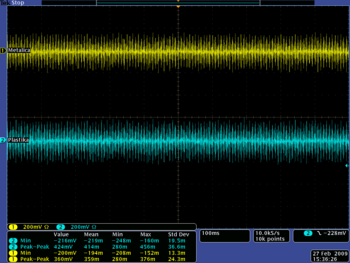 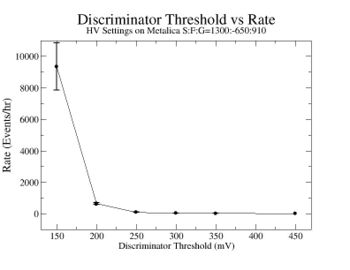 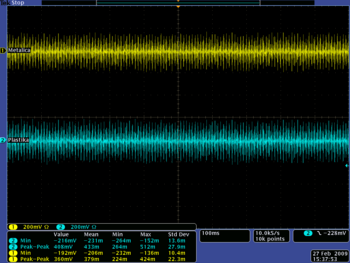 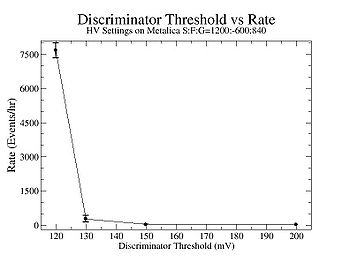 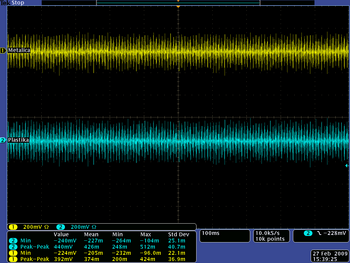 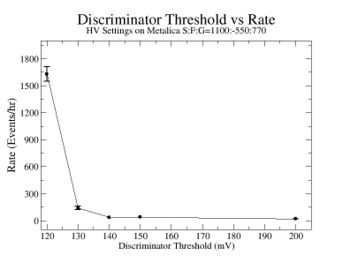 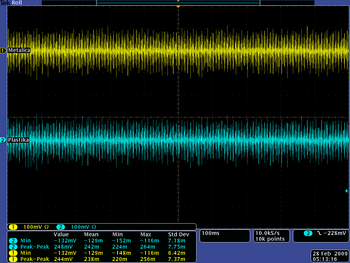 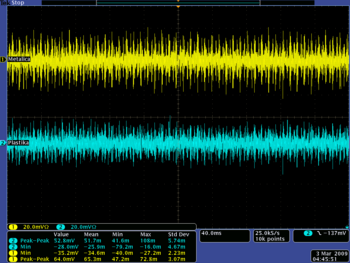 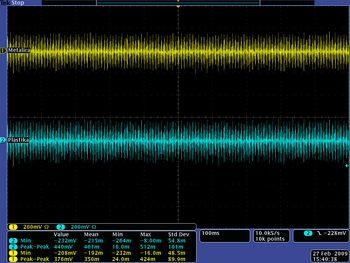 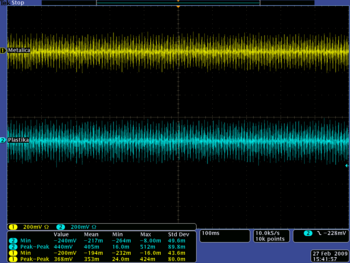 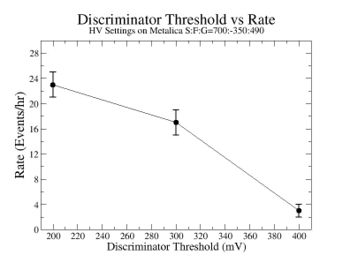 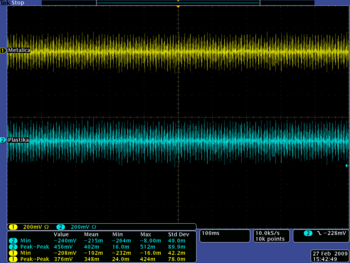 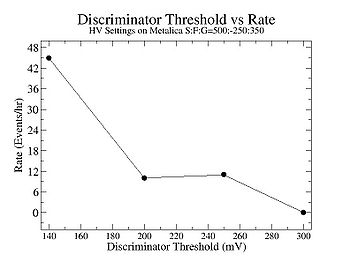 The above plateau measurements were done using the UVA splitter. In addition to cross talk, the splitter also increased the noise level. About 70 mV out of 140 mV of noise is due to the splitter. If the DC output goes directly into the VPI post amp the noise level goes down to about 70 mV. A grounding strap to the DC preamp power supply will decrease this noise to below 40 mV. 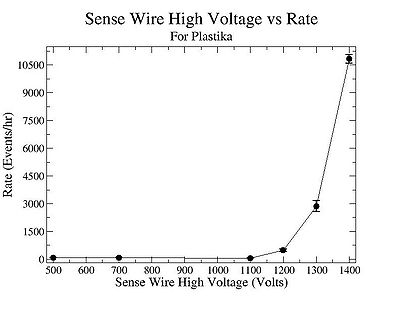 Now that we may have our cross talk problems gone and the noise reduced lets try to measure the plateaus again using 2 scintillators in coincidence .

The HV settings on Metalica and Plastika are following: S:F:G=1350:-675:945. Metalica is placed between two scintillators. As a trigger and gate the coincidence pulse from PMTs is used. Only sense wire # 1 and # 4 of metalica are connected to the ADC and TDC of VME crator. 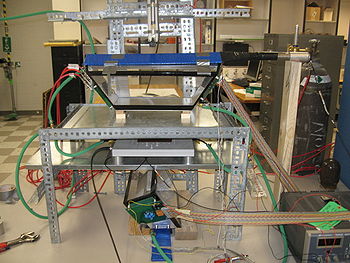