1.) Electrons in the sample

2.) Electrons in the sample using all cuts including nphe>2.5 cut

In this case, Josh's pion cut code was used. The number of entries decreased by ~ 20 %.

1.) Electrons in the sample

2.) Electrons in the sample using all cuts including nphe>0.5 cut

In this case, Josh's pion cut code was used. The number of entries decreased by ~ 20 % .

We are interested in measuring the semi-inclusive pion asymmetry for both proton and deuteron targets using the 5-6 GeV EG1b data set. Our goal will be to investigate fragmentation and establish a procedure for extracting [math]\frac{\Delta d}{d}[/math] within the CLAS 12 GeV program. We begin the analysis using the EG1 DSTs created from "cooked" data files. Our first goal is evaluate the cuts used by others to improved the identification of scattered electrons in the data sample.


if you assume a [math]\beta[/math] of 1 for the detected electrons in our data sample.

The expected number of photoelectrons in the CLAS cherenkov detector for reconstructed pion energies in the EG1 data set is shown in the graph below.

The cherenkov signal measured in CLAS for particles identified as electrons by the tracking algorithm is shown below. There are two distributions present. One distribution is centered around 0.7 PEs and the second distribution is at 5.3 PEs when two gaussians and a Landau distribution are combined and fit to the spectrum.

As we will show below, the first peak is due to the misidentification of a negative pion as an electron.

The table below compares the cherekov spectrum fit values for particles identified as electrons with and without the 6 superlayer requirement. If 6 superlayers are required for the electron reconstruction, the high PE gaussian distribution mean changes from 5.3 PEs to 3.8 PEs and is not not consistent within 2 standard deviations of the fit errors. The LOW PE gaussian distribution, the suspected pion contamination, mean changes from 0.7 to 1.0 PEs. The cuts decreases the number of entries by 37.17 %. It is believed that the Gaussian distribution centered around 1 PE is due to high energy pions(>2.5GeV). Neither of these distributions is consistent with the theoretical predictions made above suggesting that there are some light collection inefficiencies within the cherenkov detector.

The histograms presented below show the event population intensity for the pion momentum and the number of photoelectrons generated by the pions. One can see that after applying cuts on NPhE and flag the mean value is around 1.

Two types of cuts were applied on the distributions below, one on the energy deposited to the inner calorimeter [math]EC_{inner}/P\gt 0.08[/math] and another one on the total energy absorbed by the calorimeter [math]EC_{tot}/P\gt 0.2[/math], to improve the electron particle identification. In this case we used the DST file dst27095_05, the beam energy is 5.735 GeV and target NH3.

The correct identification of an electron and a pion is the main requirement for a semi-inclusive analysis. unfortunately, the pion is able to generate cerenkov radiation an as a result be misidentified as an electron. This contamination of the electron sample is removed using the cuts on the energy deposited in the electromagnetic calorimeter, the number of photoelectrons in the Cherenkov counter and fiducial cuts on the detector acceptance. The energy deposition in the calorimeter for electrons and pions is different. Pions are minimum ionizing charge particles depositing into the calorimeter which is independent of the pion's momentum once the momentum is above ~ 0.08 GeV. On the other hand, electrons produce photoelectrons and create electromagnetic shower releasing the energy into the calorimeter which is proportional to their momentum. In order to remove contamination due to the energy deposition in the calorimeter the following cut was introduced: [math]EC_{total}\gt 0.2*p[/math]. The cut was also applied to the energy collected in the inner part of the calorimeter: [math]EC_{inner}\gt 0.06*p[/math] , because the ratio of the energy deposited in the total to the inner calorimeter depends on the thickness of the detector and is a constant.

In addition to the cut on the energy deposited into the electromagnetic calorimeter, the misidentified electrons were excluded requiring a signal in the threshold CLAS Cherenkov detector. Pion's misidentified as electrons have been shown to produce around ~1.5 photoelectons in the cherenkov detector, as shown below. Geometrical cuts on the location of the particle at the entrance to the cerenkov detector were applied to reduce the pion contamination. The second histogram below shows that after cuts the peak around 1.5 is substantially reduced.

The EG1b data for kinematics chosen above show the same shape as E99-107 data.

If you follow the link below, you can find the comparison for the wide range of kinematics:

Used NH3 target runs with positive and negative torus. EC , nphe and OSI cuts are applied. Only electron was required. 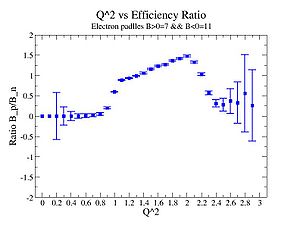