Decay: Cf-252 undergoes alpha decay to Curium (cm-248) 96.9% of the time. The rest of the time it will undergo spontaneous Fission emitting 3.7 neutrons on average per fission.

Fragments to try and observe:

I made a page discussing neutron damage to the HPGe detector (Fast_neutron_damage_to_HPGe_Detector) as a function of the total amount of fast neutrons per [math]cm^2[/math] irradiated on the detector face. [math]5 \times 10^6 n/cm^2[/math] is a factor of 10 below the point where damage was first observed in an experiment.

Object: Determine if an HpGe detector can be using to tag neutrons and identify the isotope species parent of the neutron

Measure the energy distribution observed by the HpGe detector

Below is a time difference plot of coincidence 511 keV photons from Na-22. The Na-22 source is 3" from both the timing scintillator and the HPGe detector. The following photon energy cut is applied: 508 < erg < 514. All coincidence events disappear if the source is removed, so there are virtually no accidentals. (run 5736). 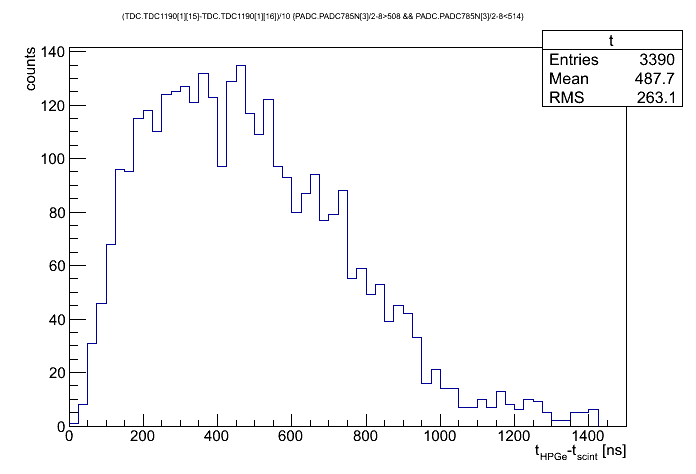 I completed a run with the CF252 source where all events were 3-fold coinc between the HPGe detector, a small timing scintillator nearby the source, and a hit in at least one neutron detector (run 5743). Neutrons were then discriminated in software by ToF, which is made possible by means of the timing scintillator.

I compared the photon energies of events with a neutron hit, to energies from a non-coincidence background subtracted CF252 spectrum (runs 5775 & 5773). I made a histogram for both cases and normalized the integrals to unity in oder to allow me to search for gammas that occur overwhelmingly when a neutron is coincident. I failed to see any pronounced energies occurring only when in coincidence with a neutron.

No poly was used to shield the HPGe detector.

CF-252 source is kept at a fixed distance while the thickness of poly between src and HPGe is increased by increments of 2".

Discriminator threshold for timing PMT, neutron PMT's, and HPGE are 50, 35, & 70 mV, respectively. When calculating neutron flux I reduced the result by factor of 4 because of the 4" of poly shielding the HPGe detector.