The beam has a Bremsstrahlung end point of 10.5 MeV, which energetically allows for only two possible neutron-producing interactions, 1n-knochout and photofission. Thus, [math]v_{i}[/math] is equal to the photofission neutron multiplicity, plus a contribution at [math]v_{i}=\text{1}[/math] from 1n-knockout events. The analysis that follows does not need to distinguish between 1n-knockout events and photofission events that emit a single neutron, since in both cases, a single neutron is emitted that is uncorrelated with all other neutrons.

During the derivation of this result, a pulse is considered in which there are [math]n[/math] neutron-producing interactions, where each individual reaction produces [math]v_i[/math] correlated neutrons, where [math]i[/math] ranges from 1 to [math]n[/math]. This event is denoted as, [math]v_1...v_n[/math], and its probability by the expression, [math]p(v_1...v_n)[/math].

Summary of what follows 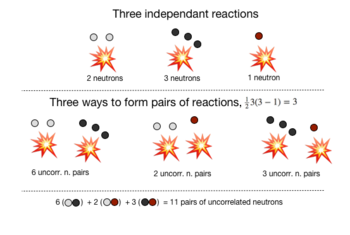 An example to illustrate the combinatorics of counting the number of accidentals available for detection. This example considers a hypothetical pulse in which there are three neutron-producing reactions, creating sets of two, three, and one correlated neutrons. The reactions can be paired together in three different ways. For each pair of reactions, the total number of accidentals is the product of the number of neutrons from each reaction.

where [math]E[/math] is the expectation value. As we will see in the next section, since [math]n[/math] follows the Poissonian distribution, this can be simplified to

For the case of two-neutron events in DP pairs, the same line of reasoning leads the following result:

There are two approximations which are required to make this result valid. 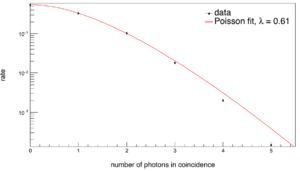 Distribution of the number of photons measured in coincidence with a Poisson fit.

This is only an approximation, however, since each detector can register at most one hit per pulse, and so the effective efficiency of the entire array drops as the number of particles emitted increases. In other words, it is being assumed that neutrons do not "compete" against one another for a chance to be detected. This approximation is justified because each detector covers only 0.5% out of [math]4\pi[/math] sr, and the rate of detected two-neutron coincidences per pulse is on the order of 10E-5, and no triple neutron events were recorded. I am making a point to address this, because it accounts for the fact that the SP/DP accidental ratio is significantly greater than 1/2 for photons, which are strictly accidentals.

This assumption can be expressed mathematically as:

As a result, to find the probability of detecting an accidental in a given pulse, simply count all possible accidental pairs in that pulse and multiply the result by [math]p(d^2)[/math]:

When examining events in pulse pairs, if a neutron event occurs in the same detector in both pulses, the event with the larger time of flight is thrown out. This way, [math]p(d^2)[/math] is the same for any pair of uncorrelated neutrons, whether they were produced during the same, or two separate pulses. Thus, the same line of reasoning used to find the approximate probability of detecting two uncorrelated neutrons in a single pulse, can be applied to the case of pulse pairs:

where,
[math]DP_{acc}[/math] is the event that a neutron is detected in both pulses
[math]m_{dp}[/math] is the total number of two-neutron pairs that can be made across two pulses by selecting a neutron produced in each pulse.

The total number of accidentals in a given pulse, [math]m_{sp}[/math] is equal to

As another example, consider 4 fissions producing 2, 5, 3, and 1 correlated neutrons, then we have:

where again, [math]n[/math] is the number of neutron-producing reactions in a given pulse.

The expression, [math]E[m_{sp}|n][/math], is known as a conditional expectation, which means that the expectation is computed for some fixed [math]n[/math]. The steps above use the fact that [math]m_{sp}[/math] is a sum of terms of the form [math]v_iv_j[/math], and in taking the expectation of the sum, each term reduces identically to [math]\bar{v}^2[/math].

The total expectation of [math]m_{sp}[/math] is computed by taking the expectation again, this time with respect to n

[math]n[/math] is assumed to follow the Poissonian distribution, so its variance is equal to its mean, or stated mathematically, [math]E[n] = E[n^2] - E[n]^2[/math]. Substituting [math]E[n][/math] with the variance in the expression for [math]E[m_{sp}][/math], gives

\begin{array}{lcl} E[m_{sp}] &=& \frac{1}{2}E[n]^2\bar{v}^2 \\ & = & \frac{1}{2} \lambda^2\bar{v}^2 \end{array} where [math] \lambda[/math] is the mean number of neutron producing reactions occurring per pulse. As argued in the assumptions and approximations section, the probability of detecting an accidental in some pulse, denoted by [math]P_{acc}[/math], is proportional to the number of accidentals available, times the two-neutron detection efficiency. To arrive at the final result, we take the expectation of [math]P_{acc}[/math]:

[math]E[P_{acc}][/math] is itself a probability, but it may also be interpreted as the per-pulse accidental rate.

As we shall see, [math]p(d^2)[/math] will also appear as a multiplicative constant in the result for DP events, allowing it to cancel in the ratio, SP/DP.

When forming pairs of uncorrelated neutrons across separate pulses, the total number of pairs is given by:

Here, [math] t_{dp}[/math], or the total number of terms of the form [math]v_iv_j[/math] after expanding [math]m_{dp}[/math], is simply the product of the number of reactions in each pulse:

The expected number of two-neutron pairs available in two-pulse events is:

Since the values of [math]n[/math] from two separate pulse are independent, the linearity of expectation be applied to give, [math]E[t_{dp}] = \lambda^2[/math]. Finally, the expected number of two-neutron pairs available when looking at DP events is:

Following the same reasoning as for same pulse accidentals, the probability of a two-neutron event in a two pulse pair is: