Experimentalists use simulations to predict the sources of background which will interfere with the signal they plan on measuring. An important aspect of this process is to understand how signals are produced in your measurement device. Devices share the common problem of isolating a signal produced in the device from the noise that is present in the device.

Below is a description of how signals are produced in bulk materials.

A device detects a particle only after the particle transfers energy to the device.

Consider a device made of some material with an average atomic number ([math]Z[/math]) at some temperature ([math]T[/math]). The material's atoms are in constant thermal motion (unless you can manage to have T = zero degrees Klevin).

Note: You may be more familiar with the Maxwell-Boltzmann distribution in the form

What is the probability that an atom in a 12.011 gram block of carbon would have an energy of 5 eV?

The average energy we expect to see would be calculated by

If you used this block of carbon as a detector you would easily notice an event in which a carbon atom absorbed 5 eV of energy as compared to the energy of a typical atom in the carbon block.

So cooling your detector will slow the atoms down making it more noticable when one of the atoms absorbs energy.

also, if the radiation flux is large, more electron-hole pairs are created and you get a more noticeable signal.

Unfortunately, with some detectore, like silicon, you can cause radiation damage that diminishes it's quantum efficiency for absorbing energy.

What does this have to do with Simulations?
You just did a SImulation. Consider the following description of the Monte Carlo Method

Stochastic
from the greek word "stachos"
a means of, relating to, or characterized by conjecture and randomness.

A stochastic process is one whose behavior is non-deterministic in that the next state of the process is partially determined.

The above particle detector was an example of describing a stochastic process using a probability distribution to determine the likely hood of finding an atom with a certain energy.

Physics at the Quantum Mechanics scale contains some of the clearest examples of such a non-deterministic systems. The canonical systems in Thermodynamics is another example.

Basically the monte-carlo method uses a random number generator (RNG) to generate a distribution (gaussian, uniform, Poission,...) which is used to solve a stochastic process based on an astochastic description.

You can measure the value of [math]\pi[/math] if you physically measure the above ratios.

Stochastic description
Construct a dart board representing the above geometry, throw several darts at it, and look at a ratio of the number of darts in the circle to the total number of darts thrown (assuming you always hit the dart board).

To get our feet wet using the UNIX operating system, we will try to solve example 2 above using a RNG under UNIX

Most of the commands executed within a shell under UNIX have command line arguments (switches) which tell the command to print information about using the command to the screen. The common forms of these switches are "-h", "--h", or "--help"

the switch deponds on your flavor of UNIX

if using the switch doesn't help you can try the "man" (sort for manual) pages (if they were installed). Try

Here is a web link to the source files you can copy in case the above doesn't work in this case the final command is "./rnd_test"

In bash shell do

To start the root program type 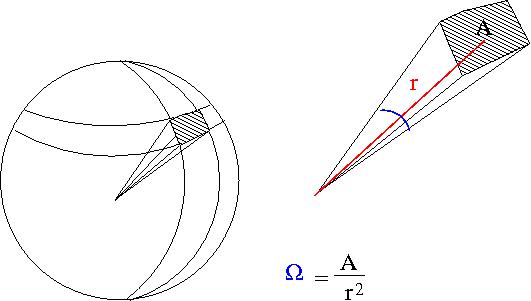 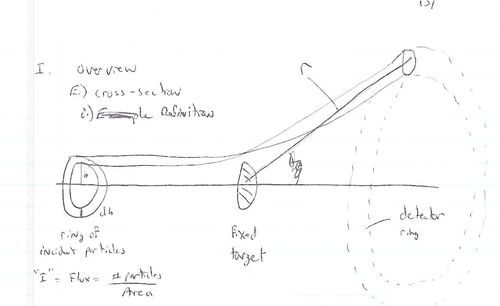 This example is an example of classical scattering.

Our goal is to find [math]\sigma(\theta)[/math] for an elastic collision of 2 impenetrable spheres of diameter [math]a[/math]. We need to look for a relationship between the impact parameter [math] b[/math] and the scattering angle [math] \theta[/math]. To find this relationship, let's solve this elastic scattering problem by describing the collision using the Center of Mass (C.M.) coordinate system in terms of the reduced mass. As we shall see, the 2-body collision becomes a 1-body problem when a C.M. coordinate system is used. Then we will describe the motion of the reduced mass in the C.M. Frame. 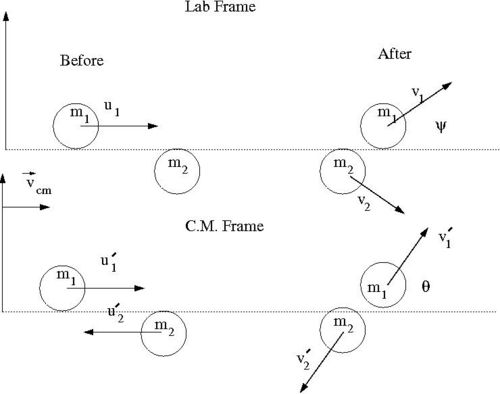 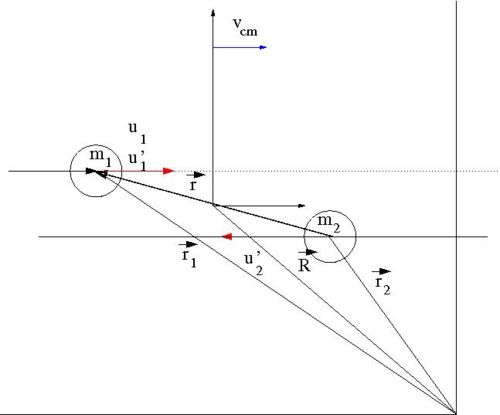 In the C.M. reference frame the above vectors have the following relationships

The Lagrangian is defined as:

The 2-body problem is now described by a 1-body Lagrangian we need to determine which coordinate system (cartesian, spherical,..) to use to write an expression for ([math]|\vec{\dot{r}}|^2[/math]). Polar seems best unless there is a dependence in the azimuthal angle.

Lagranges equations of motion are given by

where [math]q[/math] represents one of the coordinate (cannonical variables).

To get the classical scattering cross section we are interested in finding an expression for the dependence of the impact parameter on the scattering angle,[math]\frac{d b}{d \theta}[/math].

Now lets redraw the collision in terms of a reference frame fixed on [math]m_2[/math] (before collision its the Lab Frame but not after collision).

The C.M. Frame rides along the center of mass, the above coordinate system though has its origin on [math]m_2[/math]. The above drawing identifies [math]\theta[/math] and [math]\phi[/math] for the system at the point of the collision in which the CM frame is a distance [math]a[/math] (the size of the ball) from the origin of the coordinate system fixed to [math]m_2[/math]. If [math]b \gt a[/math] then there is no collision ([math]\theta=0[/math]), otherwise a collision happens when r=a (the distance between the balls is equal to their diameter). A head on collision is defined as [math]b=0[/math] ([math]\theta=\pi[/math]).

Using plane polar coordinates ([math]r, \phi[/math]) we can describe the problem in the lab frame as:

We now need an expression for [math]\dot{r}[/math] in order to integrate the above equation to determine the functional dependence of [math]\phi[/math] and hence[math] \theta[/math].

The potential in the Lagrangian though is infinite for [math]r \le a[/math] . Let's use the property of conservation of energy to accommodate this mathematical construct.

Since Energy is conserved (Elastic Scattering), we may define the Hamiltonian as

substituting the above into the equation for [math]d \phi[/math] and integrating:

drop the negative sign, sqrt in denominator allows this, and use the trig identity

compare with result from definition

The C.M. frame is often chosen to theoretically calculate cross-sections even though experiments are conducted in the Lab frame. In such cases you will need to transform cross-sections between two frames.

The total cross-section should be frame independent

Lets return back to our picture of the scattering Process 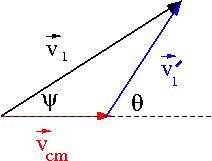 another expression for [math]\psi[/math]

using the above gallilean transformation we can do the following

after a little trig substitution

For the above equation to be more useful one would prefer to recast it in terms of only [math]\psi[/math] and masses.