which forwards you to

This project seeks to improve the response of a fission chamber by transferring a technology known as Gas Electron Multiplication developed in the late 1990s for high energy physics detectors. A Gas Electron Multiplier functions as a preamplifier when immersed in the detector's gas. The response time of a fission chamber can be improved by reducing the detector's components in size because of the increased free charge produced by the preamplifier. This technology has demonstrated an improvement in an ionization chamber's response time by at least a factor of 3. The faster detector signal will extend the detectable neutron flux beyond the current signal pile up region. The increased signal amplification may also be used to improve the detector's ability to measure the location of the incident particle on the entrance to the detector. We propose to measure the improved performance of a fission chamber equipped with Gas Electron Multipliers and evaluate its use as a neutron tomography imaging device.

Importance and relevance of proposed work

We propose to investigate a neutron instrumentation upgrade by transferring an innovation developed for gaseous detectors in the late 1990s. The NEUP's 2012 request for pre-applications calls for Program Supporting and Mission Supporting R&D in Fuel Cycle Research and Development, Reactor Concepts Research, Development and Demonstration, and Nuclear Energy Advanced Modeling and Simulation. We believe the development of the above instrumentation is aligned with NEUP's Program Supporting and Mission Supporting R&D, in particular the Fuel cycle initiative. As described above, our proposal to equip fission chambers with this novel technology could enhance their neutron detection by decreasing the rise time of the devices signal by a factor of 3 An an added benefit of this investigation, the proposal can also addresses the April 2010 Roadmap report to congress that identified the "Obsolete analog instrumentation and control technologies" as one of the major challenges facing the current nuclear power plant fleet. An improvement of the neutron detection technology will not only assist the Fuel Cycle initiative by providing a detector to essentially perform neutron tomography, but it may also impact the ability to measure high neutron fluxes near the reactor core.

his research topic will also pursue advanced measurement techniques that could complement the ongoing measurement program. In particular, fission multiplicity and fission neutron spectrum measurements as a function of incident neutron energy have been identified as important data in recent sensitivity analyses. Key university research needs for this activity include: " New and improved detector systems and sensor materials that can be used to increase the accuracy, reliability, and efficiency of nuclear materials quantification and tracking from the perspective of the operator or state-level regulator. Such systems could include new neutron coincidence/anti-coincidence counting, spectroscopic analysis, chemical, calorimetric, or other non-nuclear methods, as well as any other novel methods with potential MC&A benefits;

Mission Supporting R&D is considered creative, innovative, and transformative (blue-sky), but must also support the NE mission. Mission-supporting activities that could produce breakthroughs in nuclear technology are also invited to this solicitation. This includes research in the fields or disciplines of nuclear science and engineering that are relevant to NE’s mission though may not fully align with the specific initiatives and programs identified in this solicitation. This includes, but is not limited to, Nuclear Engineering, Nuclear Physics, Health Physics, Radiochemistry, Nuclear Materials Science, or Nuclear Chemistry. Examples of topics of interest are new reactor designs and technologies, advanced nuclear fuels and resource utilization, instrumentation and control/human factors, radiochemistry, fundamental nuclear science, and quantification of proliferation risk and creative solutions for the management of used nuclear fuel. Program supporting research requested by this solicitation is detailed as discreet workscopes in Appendix A. The information is organized by program area with each specified workscope providing the basis for a stand-alone R&D pre-application submittal.

Fuel Cycle Research and Development New and improved detector systems and sensor materials that can be used to increase the accuracy, reliability, and efficiency of nuclear materials quantification and tracking from the perspective of the operator or state-level regulator. Such systems could include new neutron coincidence/anti-coincidence counting, spectroscopic analysis, chemical, calorimetric, or other non-nuclear methods, as well as any other novel methods with potential MC&A benefits; 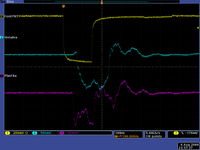 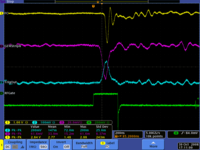 The next logical step will be to test the proposed instrument response to neutrons. The figure below illustrates a neutral particle time of flight measurement using the High Rep Rate Linac facility that is managed by the Idaho Accelerator Center and located at Idaho State University's physics department. A Tungsten radiation was used in conjuction with a 15 MeV electron beam to create a photon source from Bremstrahlung radiation. The emmitted photons entered the experimental cell which held either a water or deuterated water (HDO) target. A NaI detector was positioned 2 meters away from the target and at the azimuthal angle of 90 degrees to detect neutral particles. The hatched peaks in the histrogram represent the NaI detector measurement when using a water target. The un-hatched histogram shows a clear neutron event enhancement when using the HDO target. We observed an integrated neutron rate of 50 Hz in the 2 cm x 2 cm NaI detector. We propose using this device to test the temporal performance of a gas electron multiplier equipped fission chamber.

The project will construct a fission chamber equipped with gas electron multiplier pre-amplifiers. The temporal response of the fission chamber to fast neutrons will be quantified.

This project spans a three year period. Year one will be devoted to machining the components of a fission chamber equipped with gas electron multipliers. Assembly of the detector with a fission target will be completed in year 2. In the final year, the device will be tested using neutrons generated by the bremstrahlung photons from electrons accelerated by a 16 MeV Linac that impinge on a target of deuterated water (HDO).

We request total of $290,000 for a period of three years to defray the costs of this Program Supporting development of an improved fission chamber. The main expense will be for a graduate student ($50k) and some faculty mentor time ($20k) per year. Equipment construction and beam time expenses are also requested in the amount of $30k per year.

. The Idaho State University Department of Physics Strategic Plan identifies the use of experimental nuclear physics techniques as its focus area to addressing problems in both fundamental and applied science. The major efforts of the department include fundamental nuclear and particle physics, nuclear reactor fuel cycle physics, nuclear non-proliferation and homeland security, accelerator applications, radiation effects in materials and devices, and biology. One of the key ingredients to the department's success has been the completion of the Idaho Accelerator Center (IAC) on April 30, 1999. A substantial amount of lab space (4000 sq.~ft.) within the department has become available due to a combination of the IAC and a remodeling of the physics building. The Physics department has recently added a 400 sq.~ft., class 10,000 clean room that is current;y being used to build large drift chambers that are about 6 feet high and contain more than 4500 wires.

The PI has created a Laboratory for Detector Science at Idaho State University which houses the infrastructure for detector development projects. The 1200 sq.~ft. Laboratory is equipped with flow hoods, a darkroom, and a laminar flow hood used to provide a clean room environment sufficient to construct small prototype detectors. A CODA based data acquisition system with ADC, TDC, and scaler VME modules has been installed to record detector performance measurements. The PIs also established a student machine shop containing a mill, a lathe, drill press, table saw, and band which occupies its own space for the physics department to share. These facilities have a history of being used to construct detectors, measure detector prototype performance, and design electronic circuits.

The Idaho Accelerator Center (IAC) is located less than a mile away from campus and can provide a computer controlled a machining facility for detector construction, an electronics shop for installation of instrumentation, and beamtime for detector performance studies. The IAC houses ten operating accelerators as well as a machine and electronics shop with a permanent staff of 8 Ph.D.s and 6 engineers. Among its many accelerator systems, the Center houses a 16 MeV Linac capable of delivering 20~ns to 2~$\mu$s electron pulses with an instantaneous current of 80 mA up to an energy of 25 MeV at pulse rates up to 1~kHz. Some additional accelerator facilities at Idaho State University include another 25 MeV S-band linac, a 12 MeV a Pelletron, a 9.5 MeV, and 10kA pulsed-power machine. A full description of the facility is available at the web site (www.iac.isu.edu).

a 40 MW reactor at Brookhaven's High Flux Beam Reactor (HBFR) produced a neutron flux of [math]1.5 \times 10^{15} \frac{n /cm^2}{s}[/math] for experiments. The neutron flux was a maximum outside the core because the neutrons were directed tangentially to the core instead of radially.

The pulse width of a standard ionization chamber is on the order of 300 nsec, so a standard GEm detector would only be able to have a factor of 6 higher rate than a typical ionization/fission chamber.