The small package produces a device with small capacitance and inductance which is superior to assembling the equivalent circuit with individual components. 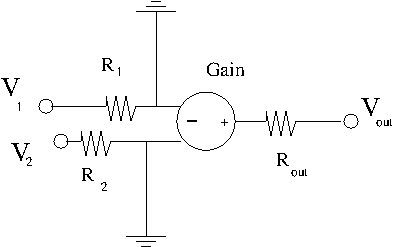 Common mode input is defined as the situation where the two inputs are equal ([math]V_1 = V_2)[/math]. In this case[math] V_1[/math] is inverted and will cancel the input [math]V_2[/math] so the output becomes Zero in the ideal Op Amp.

Op Amps usually has two bias supplies in order to produce a high gain as determined by the difference in the input voltages. The output can't be larger than the supply bias.

A single stage differential op Amp can be described as being composed of two bipolar transistors in a common emitter configuration as shown below. 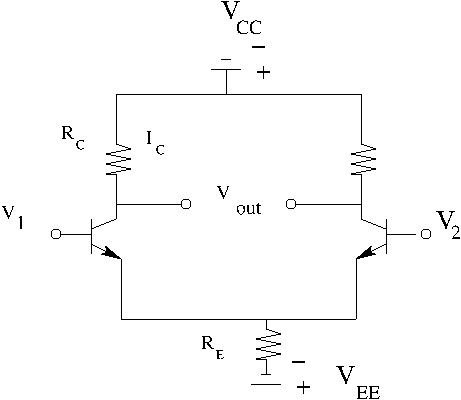 The simple rules used when analzing Op Amp circuits are

1.) The current into each input Op Amp terminals is Zero 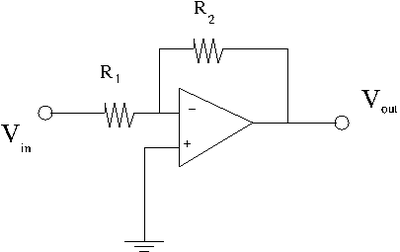 Applying the current junction rule at the inverting terminal one would have.

Using the equivalent circuit from above

Since [math]V_2 = 0[/math] for the inverting amplifier circuit above

The "-" sign means that the output is 180 degrees out of phase with the input.

Returning back the the junction rule

If we can find a way to cancel out this offset then we will be essentially "nulling" the bias current [math]I_{B1}[/math] so the Op Amp is more "perfect".

You can do this by using the other half of the amplifier, the non-inverting input current [math]I_{B2}[/math].

So to cancel the I[math]_{B1}R_2[/math] offset in[math] V_{out}[/math] you supply the opposite current with a voltage offset.

The second rule of the perfect Op Amp is that the voltage difference between the input terminals is zero (the Op Amp voltage rule).

For the typical inverting Op Amp you can imagine that a voltage difference exists at terminal [math]V_1[/math].

Then the inverting amplifier looks like a voltage divider with[math] V_{out}[/math] being stepped down to [math]V_{io}[/math] through the resistor [math]R_2[/math].

For a non-perfect Op Amp

The Slew Rate is defined as the maximum rate at which the Op AMp voltage can change.

This can be observed as an increase in the rise time of an input pulse (a Capacitive effect).

If the AC input to an Op Amp is a square wave then as the frequency increases you will start to see the square wave input become rounded.

The Slew rate is the voltage swing divided by the amount of time needed to make that swing (ie the slope of the Voltage -vs- time plot).

Where [math]\Delta V[/math] = peak -to - peak voltage swing of your input signal.

How do you get the above?

The ripple of a DC power supply to an Op Amp can produce a ripple on the Op Amp output.

The noise that an Op Amp produces at its output is dependent on the noise that is injected by its input and the Gain of the Op Amp.

In the inverting Op Amp circuit you have 2 resistors which determine the Gain. Resistors have an intrinsic noise, called Johnson noise, which is due to their temperature. Electrons traversing the resistor, although they are being directed by an electric field, will have thermal energy that results in a fluctuation in the voltage difference across the ends of the resistor.

So the RMS noise is given as

The third source of noise is the current which traverses the two Op Amp inputs through the internal resistance of the Op Amp (R_{in}).

So the total noise of the amplifier is given as