FETs differ from the bipolar transistors in the las chapter in that the current from a FET is only due to the majority charge carriers in the semiconductor while bi-polar transistors current is produced from both carrier types; electron and hole.

In the Junction Field Effect Transistor you have a single charge carrier with the minority charge carriers forming a choke point for the majority carrier current flow. It is similar to "pinching" a garden hose when water is flowing through it.

The semiconductor material of the gate is the opposite of the channel. Here the n-p (or p-n) junction is between the gate and the channel.

The JFET operates by reverse biasing the gate-channel junction (diode) so the gate current doesn't flow in the direction indicated by the circuit diagram symbol. This means that the current through the gate is small (nAmps). As a result the input impedance looking into the gate is high (M[math]\Omega[/math]) for the equivalent circuit.

The current junction rule is

for the Bi-Polar transistor

if [math]\rho[/math] = resistivity of the n-type semiconductor

If you reverse bias the gate then the depletion region at the p-n junction expands into the n-type material thereby reducing the cross-sectional area (A) of the channel.

If you continue to reverse bias the gate, keeping V_{DD} constant, then the drain current will decrease as you make the gate more negative.

The pinchoff condition will occur when the reverse bias is large enough to stop the drain current I_D.

You can find the "pinchoff" voltage by making V_{GS} more negative (n-channel) until the drain current I_D becomes zero.

In the other extreme

Because of the way a JFET operates, by pinching the current, the device heats up less at higher currents because you are no longer restricting the current flow.

At low values of[math] I_D[/math] and increase in the device temperature will cause an increase in [math]I_D[/math].

This feature of the JFET allows you to chain several together for amplification such that if one starts to overheat it will amplify less.

The JFET has a similar characteristic curve which the drain current ([math]I_D[/math]) depends on the voltage difference between the drain and source ([math]V_{DS}[/math]) for several values of the gate-source potential difference ([math]V_{S}[/math]). 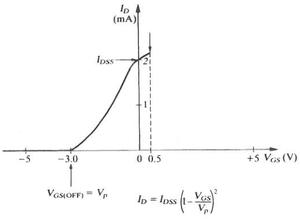 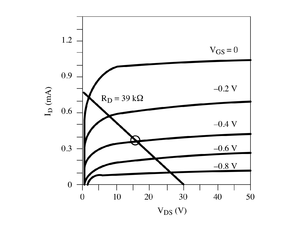 The method of Equivalent circuits seeks to describe the performance of a circuit in terms of it input and output voltages and currents. One you know the dependence of these parameters then the circuit becomes a black box.

Note
The derivatives with respect to one voltage are taken for fixed values of the other voltage.

You define the derivative in terms of "y-parameters" such that

In the case of the common source JFET configuration

Notice
The above y-parameters have units of inverse Ohms

The inverse of resistance is conductance.

In electric engineering the term "admittance" is used to describe how easily a circuit will allow current to flow (its conductance).

The unit "mho" is also used as an equivalent unit to S used by electrical engineers.

Below is a common source JFET configuration. The Gate and Drain have the Source line as a common reference. This is analogous to the common emitter configuration discussed in the last chapter and using in Lab_14_TF_EIM. 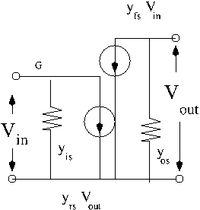 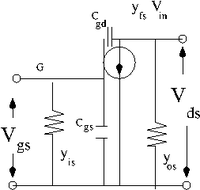 C_{gs} is the capacitance between the gate and the source.

C_{gd} is the capacitance between the gate and the drain.