Every stable and independent object (particle) that has charge has been observed to contain a quantized unit of charge which is a multiple of [math]1.6 \times 10^{-19} \mbox{Coulombs}[/math]

The experiment is Electrolysis.

You build up material on a copper cathode that is immersed in an ion solution along with an anode using a battery.

I = current passing through semiconductor

d= thickness of semiconductor in direction of applied B-filed

e= charge of an electron

Coulomb
The amount of charge that flows through any cross section of a wire in 1 second if there is a steady current of 1 ampere in the wire.

Two charged object separated by a distance (d) will feel a force between them known as the coulomb force. The magnitude of this force has been experimentally shown to be

F= force between the objects

What is a vector field?
A vector field is the association of each point in space with a direction (vector).

Example: Gravity. On the surface of the earth you observe that an apple will fall down to the ground. You can measure the magnitude of this force by observing the attraction much like how coulomb observed how two charges attract or repel each other. You can define a vector ([math]\vec{g})[/math] which points directly down and tell you the direction that an apple will accelerate if it is released. If you construct [math]\vec{g}[/math] such that

Note
The definition of [math]\vec{E}[/math] requires that the magnitude of the test charge approach zero, because the test charge can disturb the electric field we are actually trying to determine.

Unfortunately, charge can be either positive or negative whereas mass is always a positive quantity so the above uses the convention of a positive (test) charge.

The Electric potential (V) is a scalar which may be used to describe Electric Fields as well.

From the work energy theorem, Work is equal to the change in energy of a system

Let's say you lift a unit of POSITIVE charge (q) from location A above a sheet of negative charge to a higher location B.

Note
This is just like the gravitational example of walking up a flight of stairs.

You will need to apply a force on the positive charge to lift it up because the negatively charge sheet is attracting it (like the earth attracts your mass as you walk up a flight of stairs). For simplicity, let's assume you move at a constant velocity or no acceleration. In other words the attractive coulomb force is balanced by the force you use to push the positive charge to a higher location above the negatively charged infinite sheet. (For a more exact calculation you would exert a Force greater then qE to accelerate the charge to a velocity and then exert and equal but opposite force to de-accelerate the charge and bring it to rest; but all this cancels out so lets ignore it)

If a conservative force is involved then : [math]W= -\Delta U[/math]

The change in the potential depends on the sign of q_0

When you measure the electric potential (Voltage) you are actually measuring a potential difference[math] \Delta[/math] V with respect to some point [math]V_A[/math] that is customarily chosen to be zero.

An electromotive force is used to describe the external work expended per unit of charge to produce an electric potential difference across two open-circuited terminals.

A battery uses a chemical reaction to separate atoms into ions and push electrons onto the negative terminal. The terminal of a battery are usually made out of two different metal electrodes separated by a solution/paste containing ions called the "electrolyte".

Notice the battery is an isolated voltage source. This means the definition of zero potential can be made at any one point in a circuit with one battery. Because the battery is using a chemical reaction, the electrons come from inside the battery and are not pulled or pushed from the earth (a ground).

As soon as you use the battery the emf changes and is called a voltage because of the internal resistance of the battery (see Lab 1). The voltage rating of the battery represents its "open-circuit" voltage; the voltage when it is not connected.

Assume you are running 3 Amps through a 1mm diameter wire of copper.

The electron drift velocity is slow

BUT when I turn on my house light switch the light turns on quickly and not in hours.

Current indicates the direction a positive charge carrier would travel when subject to the given Electric field/Potential difference.

A resistor is basically a parallel piped of some material (usually Carbon) which has a conductor on each end.

The longer the pipe the harder it is to push water through it.

The bigger the pipe, the easier it is to push water through it.

As a result of this physical observation you have that

Resistivity is a bulk property of matter such that a good conductor has a small value or resistivity (large value of conductivity) whereas bad conductors have large resistivity values.

In circuits, a resistor is denoted using the symbol

Resistor packages are labeled with the color coding below

Typical resistors have three colors close to each other on one side.

The resistance is given by

Ohm's law is a statement the the resistant of a material is constant.

Ohms law does not hold for all materials, (tunnel diode).

Consider the two resistors in series below

For resistors in parallel

Light bulbs are basically resistors so hot that they give off light.

If you have 1 battery and a bunch of lights should you wire the light up in parallel or series to have the same amount of light come out of each light bulb?

If in parallel then each bull

Wire those Xmas lights in parallel

"Around any closed loop circuit, the algebraic sum of all the voltage drops must equal zero."

In the real battery example above you have a voltage source with two resistors in parallel.

Positive current flows into the positive side (higher voltage) of a resistor and out the negative side (lower potential) side.

The arrow in the above picture identifies the direction of "positive" current. You should try to follow the direction of positive current when you define a loop to traverse the circuit and apply the loop theorem.

If I begin my loop on the positive terminal of the battery with [math]V_{bb}[/math], then the first voltage drop I encounter as I traverse the circuit clockwise is the battery's internal resistor [math]R_{int}[/math]. I then encounter a voltage drop across the load resistor R_{load} before completing my loop around the circuit.

Algebraically the voltage drop may be written as

The largest voltage drop occurs when [math]R_{load} \gt \gt R_{int}[/math] since at any given time [math]R_{int}[/math] is a constant (though it increases with battery life until the battery is no longer able to drive the circuit).

Consider the circuit below 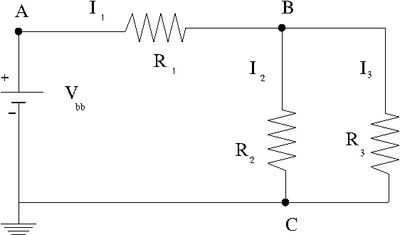 The above description results in a system of 3 equations and 7 variables . A solution exists if there are only 3 unknowns or less.

In the above voltage divider circuit, one could write an equivalent circuit by simplifying the resistors in series and parallel into one resistor. 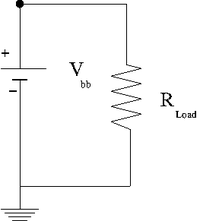 Find currents when Resistances are known

Returning to the system of 3 equations and 7 variables we can conclude that the voltage [math]V_{bb}[/math] must be known as well as the resistances in order to determine the currents.

The system of equations may be written

You can solve the above for [math]I_1[/math], [math]I_2[/math], and [math]I_3[/math] by algebraic manipulation or Matrix Methods (determinant or inversion/Gauss-Jordan elimination)

Solutions exist as long as

1.) Decide on a loop and current direction. Don't worry if you get negative signs, they mean that the direction you chose was wrong.

2.) If you loop past a resistor in the direction of current then you add (-IR) if it is opposite the current you add (+IR)