I propose to measure the positron production efficiency for a positron source that uses a quadrupole triplet system to collect positrons from a Tungsten target that are produced when the target is impinged by electrons from the High Rep Rate Linac (HRRL) at Idaho State University's (ISU) Idaho Accelerator Center (IAC). Positrons were observed in May of 2008 at the IAC without the use of a quad triplet collection system. Positrons escaping the downstream side of the Tungsten target have a wide momentum spread of 0 to 2 MeV when using a 10 MeV electron beam and a large divergence of [math]\pi[/math] rad. A quad triplet collection system can focus the positron beam and as a result increase our positron production efficiency. I will install the collection system and associated beam line components to measure the positron production efficiency using the HRRL.

I propose to measure the positron production efficiency for a positron source that uses a quadrupole triplet system to collect positrons from a Tungsten target that are produced when the target is impinged by electrons from the High Rep Rate Linac (HRRL) at Idaho State University's (ISU) Idaho Accelerator Center (IAC). Polarized Positron source, as a new probe to explore nuclear and particle physics at JLab, is being studied at the CEBAF injector. While their main mission is to measure and increase polarization, in ISU, we want to explore methods to increase positron production efficiency. On the other hand, positron beamline at ISU is also potential tool for more nuclear physics studies. I have 4 NaI detectors ready for positron test, and I have measured emittance of the electron beam for beamlien optimization. I will install the collection system and associated beam line components to measure the positron production efficiency using the HRRL.

Earlier measurements were conducted at Idaho Accelerator Center of ISU, May of 2008. Setup are shown in Fig.2. Accelerator was operated at 300 Hz repetition rate, and 10 MeV energy. As shown is Fig.2 , The electron was bent by first dipole, and sent to a 2 mm thick tungsten target. Positrons produced focused by the two quadrupoles and bent 45 degree by the second dipole which was set for 3 MeV positrons. Positrons then transported to the the end of the linac where they annihilated in the Ta target. 511 keV photons were observed in both HpGe and NaI detectors. In the Fig.2 and Fig.3, the spectrum was taken over 600 seconds.

New beamline first designed by Dr. G. Stancari, it uses quadrupole triplet system to collect positrons[1]. The design further optimized by Dr. Y Kim, and J.Ellis. Beamline is constructed, as shown in Fig.1, in the Beam Lab which is located in the basement of ISU physical sciences complex. Beam Lab is divided into two parts by a L-shaped cement wall. The accelerator cell houses the cavity and magntic elements needed to transport electrons to an experimental cell. The experimental cell is located in an adjacent room to the accelerator cell. The HRRL beamline was reconfigured into an achromat by moving the accelerator cavity to accomdate two dipoles and a system of quadrupole magnets optimized for collecting positrons.

In the new beamline, the electron beam exits the HRRL cavity and passes through first the set of quadruple triplet magnets which will be used to focus the electron beam onto the positron target. Positrons produced from the positron target will be collected by second set of quadruple triplet that will be optimized to collect positrons. The first dipole magnet bends the positrons or electrons, depending on the polarity setting, by 45 degrees towards a second dipole magnet. The second dipole will bend the beam another 45 degrees, thus completes a 90 degree bend. A third quadruple triplet will be used focus the e-/e+ beam, as users desired. 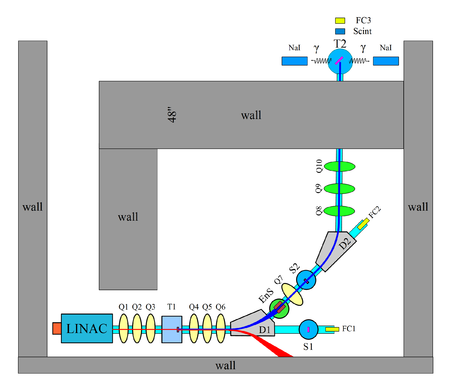 Positron annihilation target at the end of the beamline is set up for the measurement of the positrons created. When positrons annihilated at the positron target, two 511 keV photons will be created. Photons go back to back, and isotropically. The two detectors placed closely to the to the target, will used to detect these 511 keV photons.

Preparation for the Positron Production Experiment

Emittance is an important parameter in accelerator physics. The beam size and beam divergence at any point in the beamline can he obtained by emittance and Twiss parameters by simulation. This will allow user to have better control over beam, thus obtain desired beam. Energy spread was also measure by scanning the beam with dipole.

Optical Transition Radiation (OTR) emittance measurement was carried out on HRRL on March of 2011 with a 10 [math]\mu m[/math] thick aluminium screen. Transition radiation is emitted when a charge moving at a constant velocity cross a boundary between two materials with different dielectric constant. Emitted photons are observed on the camera give us information about the size of the electron beam.

We used quadrupole scanning method to measure emittance. In this method we turn off all the quads except one we use for scanning, we change quad current and we observe beam spot changes. In the Fig.5-7 are shown beam spots for quadrupole coil currents.

I used the MATLAB to analyze the data. The results shows that:

To detect positrons created, I want a put Ta target at the end of 90 degree beamline as my Annihilation. When positrons hit W-target, 511 keV photons will be created. I want to use NaI detectors to detect these 511 keV photons.

I acquired some NaI crystals from Idaho Accelerator Center (IAC). I built our own PMT bases for them, since their own bases not working properly. I modified the design of model PA-14 from Saint-Gobain crystals & detectors ltd. Now these detectors are tested and calibrated, and ready to use for the measurement.

Even though now the 511 keV peak seems to be very wide and resolution is low, But this can be improved by doing coincidence of two detectors in the experiment.

We can achieve few improvements compared to the 2008 experiments

3. Positrons are collected by the quadrupole triplet system, whereas before there were two quadrupoles.

4. Simulations will be conducted to optimize beam elements for positron collection.

The step motor is shown in the figure will hold 8 tungsten targets. This moter will be placed in a chamber currently being manufactured.

Measurement of the Positron Production Efficiency

I will insert the first tungsten target and create positrons. I am expecting to collect part these positrons and transport them down the second tungsten target at the end of the 90 degree beamline. By doing these, 511 keV photons will be created and I want to detect them by our NaI detectors.