I am constructing an achromatic electron beam line to test positron production using the High Rep Rate Linac (HRRL) at Idaho State University's (ISU) Idaho Accelerator Center (IAC). I have studied the radiation impact of moving the cavity to new location with GEANT4 simulation and direct measurements. After new beamline was ready, I performed emittance measurements, and calculated emittance and twiss parameters. I acquired 4 NaI crystals from IAC. I built PMT bases for them and tested them, and they worked properly. I want place a tungsten target in a vacuum chamber between the 1st and 2nd quadrupole triplet sets. A dipole magnet was mapped and used to measure the beam emittance for different electron energies. I am expecting to collect positrons from the downstream side of the Tungsten target and transport them to a positron annihilation target at the end of the 90 degree beamline. Two NaI detectors at 90 degrees to the anihilation target are going to be used to detect 511 keV photons from positron annihilation, which will indicate the efficiency of generating positrons.

I propose a measurement of the positron production efficiency using the High Repetition Rate Linac (HRRL) located at the Beam Lab of the Physics Department, at Idaho State University (ISU). The HRRL is an S-band (xx GHz) electron linear accelerator with the capabilities shown in Table 1.

As shown in FIgure 1, the Beam Lab, located in the basement of ISU physical sciences complex, is divided into two parts by a L-shaped cement wall. The accelerator cell houses the cavity and magntic elements needed to transport electrons to an experimental cell. The experimental cell is located in an adjacent room to the accelerator cell. The HRRL beamline was reconfigured into an achromat by moving the accelerator cavity to accomdate two dipoles and a system of quadrupole magnets optimized for collecting positrons.

In the new beamline, the electron beam exits the HRRL cavity and passes through first the set of quadruple triplet magnets used to focus the electron beam onto the positron target. Positrons exiting the downstream side of the positron target will be collected by second set of quadruple triplet optimized to collect positrons. A dipole magnet selects the positrons or electrons exiting the quadrupole triplet bending them by 45 degrees towards a second dipole magnet. The polarity of the first dipole is used to select either positrons or electrons. The second dipole will bend the beam another 45 degrees, thus completing a 90 degree bend. A third quadruple triplet will be used focus the e-/e+ beam profile as needed. 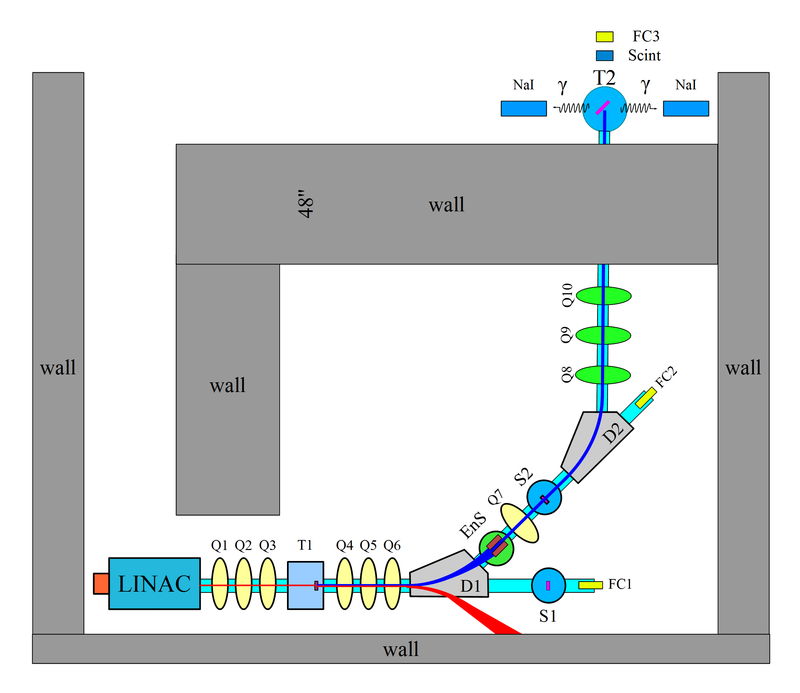 This is the setup and apparatus that I want run for positron creation and collection.

Earlier measurements were conducted at Idaho Accelerator Center of ISU, May of 2008. Setup are shown in figure below. 511 keV photons from annihilation were detected.

Emittance is an important parameter in accelerator physics. If emittance with twiss parameters are given at the exit of the gun, we will be able to calculate beam size and divergence any point after the exit of the gun. Knowing the beam size and beam divergence on the positron target will greatly help us study the process of creating positron. Emittance with twiss parameters are also key parameters for any accelerator simulations. Also, energy and energy spread of the beam will be measured in the emittance measurement. 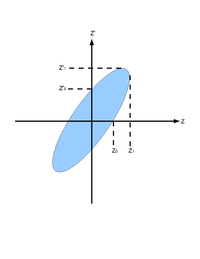 For the convenience of representation, we use [math]z[/math] to represent our transverse coordinates, while discussing emittance. And we would like to express longitudinal beam direction with [math]s[/math]. Our transverse beam profile changes along the beam line, it makes [math]z[/math] is function of [math]s[/math], [math]z~(s)[/math]. The angle of a accelerated charge regarding the designed orbit can be defined as:

If we plot [math]z[/math] vs. [math]z'[/math], we will get an ellipse. The area of the ellipse is an invariant, which is called Courant-Snyder invariant. The transverse emittance [math]\epsilon[/math] of the beam is defined to be the area of the ellipse, which contains 90% of the particles <ref name="MConte08"> M. Conte and W. W. MacKay, “An Introduction To The Physics Of Particle Accelera tors”, World Scientifc, Singapore, 2008, 2nd Edition, pp. 257-330. </ref>.

By changing quadrupole magnetic field strength [math]k[/math], we can change beam sizes [math]\sigma_{x,y}[/math] on the screen. We make projection to the x, y axes, then fit them with Gaussian fittings to extract rms beam sizes, then plot vs [math]\sigma_{x,y}[/math] vs [math]k_{1}L[/math]. By Fitting a parabola we can find constants [math]A[/math],[math]B[/math], and [math]C[/math], and get emittances.

Emittance measurement was carried out on HRRL on July of 2010 under the experimental setup discussed in previous section. In this measurement I used analog camera to take images. 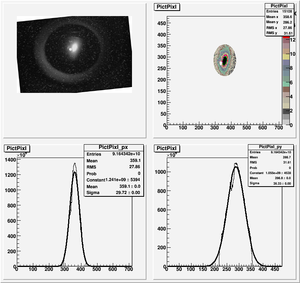 I did Guassian fits to beam image to extract x, y RMS values for different quad currents. I found out that the camera was rotated slightly. To compensate for it, images were rotated back, and I had beam image upright. To reduce back ground, I just focused on OTR beam image and took out the filament spot from data, as shown in image below.

Emittance Measurements with an OTR

During first emittance measurement, we see our electron beam image at YAG crystal is much bigger than expected. Comparison study shows that for same beam YAG screen shows bigger beam size than Optical Transition Radiation (OTR) screen. Yag is good for low charge beam. Electron beam from HRRL has a big charge in a single pulse and beam size is big.

I did second emittance measurement with 10 [math]\mu m[/math] thick aluminium OTR screen. I also improved our optical imaging system by using better digital camera that can be triggered by the same pulse trigger electron gun. Also I used three 2-inch diameter lenses to focus the lights from OTR to the CCD of the camera. 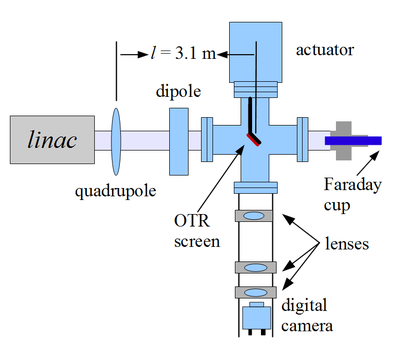 The cavity was moved the new location and beam line was built by the design of Dr. Yujong Kim, as shown in figure

Experimental setup is shown in the following figure

I chose one of the quad at a time to do the scan and turned off all the other quads. Optical transition radiation was observed at OTR target. At the end of 0 degree beamline I had a Faraday cup to measure the charge of the beam. Camera cage system was located below the OTR target. There are 3 lenses used to focus lights from target to the CCD camera. Target can be pushed into or taken out of the beamline by the actuator at the top.

OTR Target can be pushed into or taken out of the beamline vertically by the actuator at the top, which is attached to the 6-way cross. This actuator controlled remotely at the control desk.

Camera cage system was located below the OTR target. Cage system attached to the bottom of the 6-way cross. Lower end of cross is a transparent window. There are 3 lenses used to focus lights from target to the CCD camera. They have focal length of 100 mm, 500 mm, and 50 mm.

The lens closest to the OTR target is 10 cm away from the target, an it has 100 mm focal length. This lens was located as close to the target as possible, so that we might collect as much OTR light as possible, and it was thus called collector lens. The lens in the middle has focal length of 500 mm. Moving this lens will change total focal length in a small amount, and this allow us to do fine tuning. Thus, we called this lens fine tuning lens. The last lens, which is furthest from target, and closed to the CCD camera has the shortest focal length of 5o mm. Its short focal length allow us to focus the light on the very small sensing area of the CCD camera.

Optical Transition Radiation (OTR): Transition radiation is emitted when a charge moving at a constant velocity cross a boundary between two materials with different dielectric constant.

Emittance measurement was carried out on HRRL on March of 2011 under the experimental setup discussed in previous section. In this measurement I used JAI digital camera.

The projection of the beam is not Gaussian distribution. So, I fit Super Gaussian fitting <ref name="BeamDisBeyondRMS"> F.-J Decker, “Beam Distributions Beyond RMS”, BIW94, Vancouver,CA,Sep 1994, . </ref>.

I used the MATLAB to analyze the data. The results shows that: 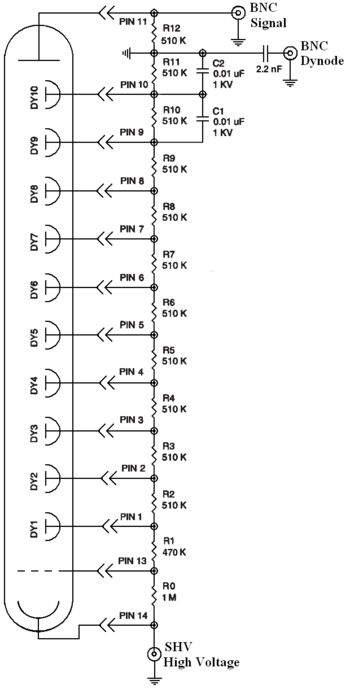 I acquired some NaI crystals from Idaho Accelerator Center (IAC). I built our own PMT bases for them, since their own bases not working properly. I modified the design of model PA-14 from Saint-Gobain crystals & detectors ltd. Following image is the design. 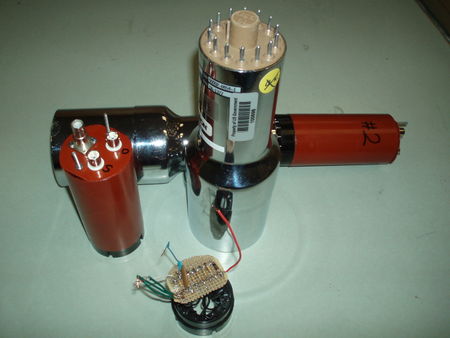 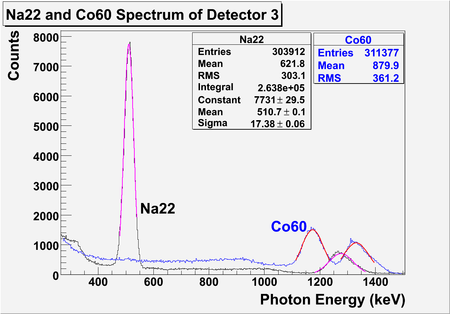 Even though now the 511 keV peak seems to be very wide and our resolution is low, I are expecting to improve these by doing coincidence in the future experiments.

I will insert the first tungsten target and create positrons. I am expecting to collect part these positrons and transport them down the second tungsten target at the end of the 90 degree beamline. By doing these, 511 keV photons will be created and I want to detect them by our NaI detectors.