The table below uses a characteristic DST file to try and estimate the sample size for a semi-inclusive analysis of pion electroproduction. The column marked "cuts" below indicates the number of events kept when the standard EC based electron identification cuts, described above, are used: [math]EC_{tot}\gt 0.2*p [/math] and
[math] EC_{inner}\gt 0.08*p[/math]. The next step will be to compare unpolarized pion production rates in order to evaluate the CLAS detectors efficiencies for measuring charged pions with different torus polarities. The question is whether you get the same rates for negatively charged pions in one torus polarity to positively charged pions using the opposite torus polarity.

Rates from other experiments in our Kinematic range

We have proton and electron. In the Lab frame electron is moving along the x-axis with momentum ;[math]\vec{p_e}[/math] and proton is at rest. The 4-vectors are:

Using the last two equations we will get the following for x component: 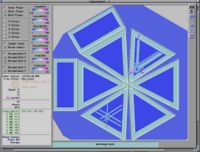 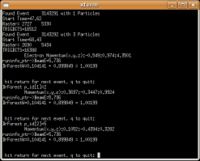 Conservation of the 4-momentum gives us following

Solving it for the final proton state

In our case 4-vectors for particles are 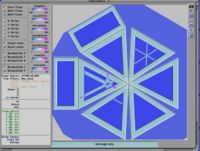 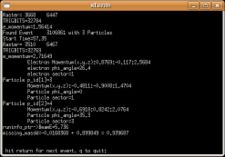 Below is the conservation of the 4-momentum

Solving it for the final neutron state

The 4-vectors for the particles in this event

The mean value of the missing mass is around 2.056 GeV.

Below is shown histograms before changing angles by sectors for pions and electrons.

[math]\phi[/math] angle in the Center of Mass Frame

The variables below are in Lab Frame:

From the above picture we can write down the momentum x,y and z components for pion in terms of angle and total momentum.

The target materials are located in the target cells. They are made out of polychlorotrifluoroethylene with a thickness of 0.2 mm. The cells itself are in diameter 15 (15.7) mm and in length 10 (12.7) mm, with 0.025 mm aluminum entrance windows and 0.05 mm kapton exit windows. [4]

Pion Rates -vs- Paddle for opposite sign Torus fields

sc_paddle vs Momentum with cuts 5.7 GeV Beam Energy(number of events=2)

The number of events per trigger is measured for the respective DST file above and then the Total number events in the data set is estimated from that.

Paddle 5 and 8 Rates and statistics for electrons