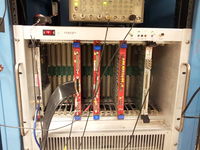 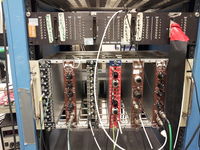 shutter open has two peaks, and shutter close has one peak.

shown in the figure below.

The table below shows the percentage of the charge of (shutter open - shutter close) to that of shutter open.

The detector has been tested after installing U-233 and its shutter using CAEN V792 Q-ADC (Analog charge to digital converter). The detector design has been modified by adding U-233 and an FR4 shutter as mentioned in sections xx and yy. To observe a signal for the alpha particles emitted by U-233, an input voltage was 2.6 kV and 2.9 kV for HV-divider circuit and the cathode successively. The output of the trigout goes through the electronic modules then to the DAQ system as mentioned in section x. the following figure show the charge spectrum collected by the DAQ system.

charge collected as the voltage is 2.60 2.90 kV for GEM and cathode successively