We propose to measure the concentrations of several nuclei using photon activation analysis (PAA) and determine if there is a correlation between several coin samples and candidate mines that may have been the source for the silver in the coin. Based on previous work~\cite{Meyers} and our preliminary results, we intend to focus on Gold, Iridium, and Strontium nuclei. PAA has been able to measure the content of nuclei in a sample to the level of parts-per-million (PPM). PAA has successfully performed elemental and matching analyses for a wide variety of samples including museum artifacts ~\cite{Segabade93}, fossils~\cite{Starovoitova13}, forensic samples~\cite{Starovoitova13a}, agricultural samples~\cite{Sun12}, and various environmental samples~\cite{Sun12,Mamtimin13}. PAA is an ideal tool for performing the above measurements due to its ability to accurately measure PPM level concentrations without destroying the sample as compared to other methods of detecting base elements~\cite{Segebade87,Segebade83,Neider77}.

A Description of PAA

Photon Activation Analysis is a non-destructive technique used to measure the concentration of nuclei in materials. A sample is irradiated using bremsstrahlung photons at energies that are sufficient to excite the material's nuclei. After the irradiation, the sample is placed in a photon spectrometer to quantify the energy of the photons that are emitted when the nuclei within the material de-excite. The photon energy emitted by this de-excitation can be used to construct a list of nuclear species capable of emitting those photons. Measuring the decay time (half life) of specific photon energies can allow a determination of a unique nuclear species. By comparing the number of photons being emitted at the characteristic energy to a known standard it is possible to quantify the concentration of nuclei in the sample. Below are several examples that used this technique.

One of our latest projects performed a forensic analysis of several evidence samples from difference knives. We were investigating six samples: Sample 1 and Sample 2 were pieces of two identical knives of the same brand. Sample 3 and Sample 4 were pieces of a single knife. Sample 5 and Sample 6 were pieces of two knives from different manufacturers. All the samples had masses ranging from 2.5 to 4 grams and had approximately the same (but not identical) surface area. They were irradiated for 2 hours using a 30 MeV, 2 kW electron beam. Each sample's activity was measured after the irradiation using a high purity germanium detector. Several gamma emission lines, corresponding to Cr, Mo, Ni, Mn, Ti, Co, Sb, and As target nuclides, were easily identified. Figure~\ref{fig:KnifeBlades} shows a comparison of the different element concentrations for the samples that were taken from one knife blade (red), from different blades of the same brand (black), and from different brands (blue). Pieces of a particular knife blade can easily be differentiated. PAA can distinguish between different batches of same-brand knives, and therefore can be an excellent evidence match analysis tool.

Another recent project performed a match analysis between two fossils and two soil matrices. We simultaneously irradiated the four samples collected from two separate locations in South Dakota using the bremsstrahlung photons generated by a 20 MeV electron accelerator. After five hours of irradiation, we measured the photon energy spectrum and compared the concentrations of different elements in the fossils and in the matrices (Figure~\ref{fig:Fossils} ). One striking result is Mg, Cr, and Sm were not detectable in Fossil 2 but were found in Fossil 1. Fossil 1 and soil Matrix 1 have detectable concentrations of Mg, Cr, and Sm that were not observable in Fossil 2 and Matrix 2, suggesting that a strong correlation may exist. When comparing all elements there appears to be a strong correlation between Fossil 1 and soil Matrix 1 as well as a correlation between Fossil 2 and soil Matrix 2. In particular, Fossil 1 and soil Matrix 1 have higher concentrations of Na, Mn, Y, Zr, and I. Fossil 2 and soil Matrix 2, on the other hand, have higher concentrations of Br. Thus we were able to show that there is a strong correlation between the elemental composition of the fossil and the elemental composition of the corresponding matrix. We can perform a similar analysis for coins and ore sampels provided by Deep Blue Marine.

In March of 2013, three silver coins, provided by Deep Blue Marine, were activated and the emitted photon energies were measured. These measurements were the first step towards using PAA to perform a multivariate statistical analysis that can test the origin of the coins. As in the provenance study of the fossils above, there is an element present in one sample that is missing in others. This element is the metastable state of Sr-87. This difference between the coins is our fist indication that a correlation may be determined between the coin sample and the mine which produced the ore for the coin. We propose to measure several mine candidate samples to determine if this correlation does exist. 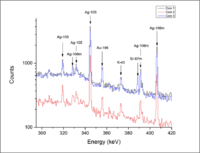 We are proposing to perform the following tasks:

1)Experiment preparation:Estimation of photon flux and prediction of activities for radiation safety

After the number of samples, their shape ,and mass are known, a Monte-Carlo simulation will be performed to estimate the photon flux through the samples and choose an optimum irradiation conditions, such as:

Once the irradiation conditions are established, samples (artifacts and ores) will be irradiated for a short time (10-30 minutes) for two purposes: do qualitative analysis of elemental composition and compare the predictions of photon flux and activities. After making sure the activities are within expectations and compliant with radiation safety protocols, the samples and reference material, can be irradiated for 8-10 hours to maximize PAA sensitivity of the technique and minimize the detection limit. After irradiation, the samples' elemental composition will be measured using a high purity germanium detector. All the spectra will be stored.

Gamma spectra will be analyzed. Peaks in the spectra will be identified and the concentration of observable elements of interest will be calculated from the produced radioactivity.

Measured activities will be described in details. We will provide the description of the experiment, raw spectroscopic data, and a table of calculated concentrations of different elements. Error analysis will be performed and uncertainties will be included. The work undertaken as part of this proposal will be completed 60 days after an award is received.

Measured activities will be described in details. We will provide the description of the experiment, raw spectroscopic dat,a and a table of calculated concentrations of different elements. Error analysis will be performed and uncertainties will be included. The work undertaken as part of this proposal will be completed 60 days after an award is received.

The budget below quantifies a cost breakdown for irradiating a set of five coins for 10 hours and a set of 3 ore samples for 10 hours. The PI will be responsible for managing the project, performing irradiations, measuring spectra, and delivering a report. It is estimated that the PI will spend two weeks performing the tasks needed to meet the project deliverables. A PAA consultant will perform the spectral analysis and will be responsible for quantifying the concentration of the indicated isotopes. It is expected that the analysis consultant will spend approximately one week on the above tasks. A student will be hired for 1 month and directed by the PI to prepare and handle the samples for irradiation and perform the spectra measurement. Beam time charges for 20 hours will cost \$5000. A travel budget is included for a consultant to visit the IAC and present the results to Deep Blue Marine for a discussion of the path forward to determine the silver coins provenance. A modest budget for shipping non-radioactive materials and a consumable budget is included below. The fringe and indirect costs are also identified according to the current University rate for such charges.