The Scientific/Technical/Management section of the Step-1 proposal is restricted to one page in length and should include a description of the science goals and objectives to be addressed by the proposal, a brief description of the methodology to be used to address the science goals and objectives, and the relevance of the proposed research to this call. The relevance section will be used to confirm that the proposal is submitted to the correct program element. No evaluation of intrinsic merit will be performed on Step-1 proposals. The NASA Solicitation and Proposal Integrated Review and Evaluation System (NSPIRES) system for proposal submission requires that Step-1 proposals include a summary describing the proposed work; the Scientific/Technical/Management section must be uploaded as the PDF "Proposal Attachment." Proposers will be notified when they are to submit their Step-2 proposals. If NASA determines that the proposed investigation should instead be submitted to another program, proposers will receive instructions on how to properly submit their Step-2 proposal.

The goal of the Laboratory Analysis of Returned Samples (LARS) Program is to maximize the scientific return from the samples provided by missions such as Genesis, Stardust, and Hayabusa (see further below) through development of laboratory instrumentation and advanced analytical techniques required for the complete analyses of the samples they return. In addition, this program supports analytical work on samples returned by recent Planetary Science Division missions, including Genesis and Stardust, as well as samples returned by Hayabusa. Proposals solicited under this program include those that seek to develop new analytical instrumentation or combinations of analytical instruments, or new components of analytical instruments, leading to significant improvements in the precision, resolution, or sensitivity of measurements compared to the existing state of the art. Also of interest are proposals for the development of new analytical techniques for existing instrumentation that will push the limits of current technology, for example, by the elimination of analytical interferences or contamination problems. In all cases, both the development efforts and the clear relevance to NASA sample- return missions must be clearly documented in the proposals. Proposals may seek to develop analytical capabilities for future sample-return missions. However, work that addresses the needs of current or selected missions have the highest priority. Some proposals may seek to develop instrumentation and techniques that will be used by only a small number of investigators at a single institution. However, in other instances, the high cost of the instrument and its associated support structure may allow the development of only a limited number of such facilities that must be shared by the entire research community. For these larger and more expensive facilities, proposers should include detailed plans for facility management based on the size of the anticipated user base, including facility oversight, the fraction of time that will be made available to outside users, and the mechanism for allotting such time on a regular basis. In all cases, cost-sharing arrangements in the development of new instrumentation or techniques and evidence of a long-term institutional commitment to the analysis of returned samples will be viewed favorably in the selection process. Collaborations between instrument   C.18-1 builders and scientists who understand the samples to be analyzed are encouraged. Ongoing laboratory support (e.g., service contracts) will generally not be supported. This program supports analysis of extraterrestrial samples from sample return missions, with the exception of lunar samples, whose analysis is supported by LDAP (C.8) and Solar System Workings (C.3). Also excluded from LARS, but included in the C.2 Emerging Worlds (C.2) program, are analyses of meteorites or cosmic dust, unless these analyses are directly in support of the interpretation of mission data. Returned samples from NASA Planetary Science missions, plus a subset of samples returned by Hayabusa, are allocated by the Astromaterials Curator at NASA Johnson Space Center after approval by CAPTEM and NASA Headquarters. If your proposal requires the use of any returned material, such as that from Genesis or Stardust, please review the information at http://curator.jsc.nasa.gov/ and make a request to the Astromaterials Curator, as described.

The MegaSIMS, developed at UCLA, is a hybrid of a secondary ion mass spectrometer and an accelerator mass spectrometer (Mao et al., 2008). It was developed with the specific goal of measuring the oxygen isotopic composition of solar wind implanted in collectors flown on the Genesis mission. The development was driven by the need to eliminate the interference of 16OH on 17O in solar wind implants that have huge H/O ratios. The instrument succeeded and prelimi- nary results were presented at the Lunar and Planetary Science Conference in March, 2008. The results are extraordinary: the Sun appears to be 5% richer in 16O (McKeegan et al., 2009) than most samples known, including the Earth, Moon, Mars, most Comet Wild 2 dust, all bulk mete- orites and most objects within those meteorites, the sole exception being some minerals in refrac- tory inclusions in meteorites and, of all places, in Wild 2 dust.

The low concentrations of many elements place a premium on sensitivity of depth profil- ing measurements. The SARISA instrument, built at Argonne National Laboratory, uses lasers to resonantly ionize sputtered neutral atoms from Genesis targets (Veryovkin et al., 2004, 2008). These photoions are then extracted and mass analyzed with a time-of-flight mass spectrometer. This technique allows almost complete freedom from isobaric interferences, since only the ele- ment of interest is ionized, and very high sensitivity, since sputtering yields mostly neutral at- oms, not ions. The SARISA instrument has a measured useful yield (atoms counted in the detec- tor per atom removed from the surface) of ~25%, far better than state-of-the-art secondary ion mass spectrometers.

The goal appears to be the identification of 0.1 micron size dust particles embedded in a collector (Aerogel). The Stardust mission had an Aerogel collector with a surface area of 1000 cm^2 and expect to find 45 dust particles. AFter looking at 1/3 of the collector they may have found 4.

The development was driven by the need to eliminate the interference of 16OH on 17O in solar wind implants that have huge H/O ratios.

"The captured Wild 2 samples are predominantly fine-grained, loosely bound aggregates, most also containing much larger individual crystals of olivine, pyroxene and iron/nickel sulfides. All analyses suggest that small and large Wild 2 particles are composed of a similar, if not identical, suite of minerals."

"There are strong infrared extinction features peaking at 9.7 µm and 18 µm which are almost certainly due to amorphous silicates with a composition approximating that of olivine (MgxFe2-xSiO4)."

"In dark clouds, a number of additional features appear in the infrared extinction, presumably due to growth of molecular ice mantles on the refractory dust grain cores. The strongest feature is at 3.08 µm and is due to amorphous H2O ice. Additional features have been identified as frozen CH3OH (3.53 µm), CO (4.67 µm), CH4 (7.65 µm), and CO2 (15.2 µm)."

For the most abundant Fe-56

Between 17 and 25 meV photon energies the above reaction appear to have similar cross sections of about 60 and 15 mbarns respectively (you have twice the cross section for proton knockout than for neutron).

Between 17 and 25 meV photon energies the above reaction appear to have similar cross sections of about 50 and 90 mbarns respectively (you have twice the cross section for proton knockout than for neutron).

pg 147 of suggests a proton knockout cross section of about 7 mbar's at 18 MeV photon energy. 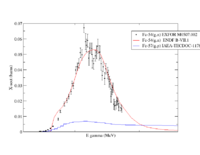 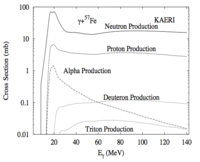 The scientific objective of this proposal is to develop a laboratory instrument to simultaneously identify the location and elemental concentration of the interstellar dust samples return by the Genesis, Stardust, and Hayabusa missions. The proposed instrument is designed to be essentially non-destructive and has the potential to discriminate background. The Genesis mission curators have begun removing contamination from the dust collector chips that remain after the collector shattered on its return impact in Utah. One goal of the proposed instrument would be to measure the elements in the material and attempt to discriminate between the interstellar dust and remaining contaminants. The proposed instrument would also have the goal of enabling a non-destructive survey of the Stardust mission's collector such that both the location of dust particles and the abundance of some atomic elements within the sample are determined. The methods used to perform these measurements are described below.

We propose to construct a system that will use activation analysis interrogation to measure the location and concentration of atoms embedded in materials used to collect interstellar dust samples. This is accomplished by exciting the nucleus of the atom of interest in the sample using radiation and then measuring both the location and energy of the photons emitted by those excited atoms. Actuated stepping motors are used to accurately position the sample in front of an collimated HpGe detector. A map of the elements in the sample is constructed by encoding the measured activity of observed photon energies with the physical location of the activity in the sample.

The work required to develop the above instrument will be performed over a four year period. The first year will be devoted to creating and performing measurements of test samples that mimic the interstellar dust collectors. The first test samples will contain only a few elements, those characteristic of olivine, that are expected to exist within interstellar dust. Activation analysis will be used on those samples to establish a sensitivity baseline. The second year will be devoted to constructing an automated scanning system that will move the samples across the activation analysis detector. Encoders on the scanning system will correlate the sample's position to the photon energies measured by the activation analysis detector. The remaining two years will be used to quantify the position resolution and detection limits of the system. The third year will used pure test samples similar to what was used in year one. The fourth year will use samples that include contaminants designed to quantify a sample contamination threshold for the device.