Insulators under a high voltage

Air is one of insulators that prevent charge exchange between two charged conductors. Parallel plates is an example where the air is insulating the negatively charged plate from the positively charged one. Nevertheless, air does keep this properties when the voltage difference between the plates causes air ionization. the process will produce free electrons accelerates toward the positive plate.Enough number of these electrons will make the air a conductor and sparking is observed on the plates.

Solving the equation will give the number of the free electrons produced in a distance (x) as : 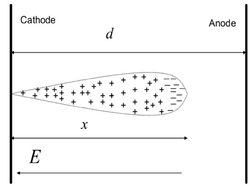 Simultaneously happens with the first process, the gas ions will bombard the cathode, it will give energy to release new electrons. Townsend's secondary coefficient ([math] \gamma [/math]) is defined as "The number of electrons released at the cathode by the impact of one ion. 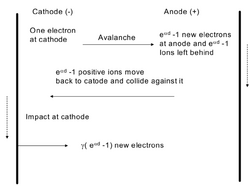 Based on the previous processes flashover appears, aslo can be represented by the following:

where k is constant depends on the material's Townsend's coefficients, its value ranges from 2.5 and 18.

limits the number of the free electron in an avalanche to 5 X 10^8, so

where x_c is the critical avalanche length.

The empirical result was based on a study included a growing avalanche by Wilson cloud chamber during the breakdown of gaps of different length and gas pressure. "When the length of the avalanche becomes large, the negative and positive charges in the avalanche distort the field in such an extend that new avalanches form ahead of the original avalanche, eventually bridging the gap." <ref name="Dr JP Holtzhausen"/>. 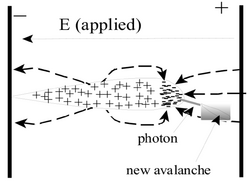 Because of the increase in the voltage to a point to breakdown the gap, Sparking appears clearly in the area. The following table shows the mechanisms that possible to take place: 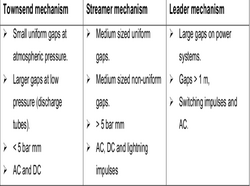 a) Effect of Electrode

This effect appears clearly as the gas is under 200kV/cm, specially steel and copper electrodes.

Conditioning of the electrodes is defined <ref name="Mazen A.salam"/> "repeated breakdown affecting the electrode surfaces have their influence on the strength of the gap. the dielectric strength increases with the number of breakdowns until it levels off at an ultimate value.

The previous phenomenon discussed under using the gases as insulators, but in my opinion it may extend to the solid insulator as we happened many times as we are frequently using the coated THGEM foil.

1- Imperfect solid adhesion: Narrow gas created because of the imperfect casting for the spacers, or mechanical stress on the solid/gas interface.

Mainly Contaminants cause local field enhancement, and their oscillation between the electrodes under a DC voltage causes firefly. There are studies measured the effect of the contaminant geometry and have these particles free or not free on the breakdown voltage.

Coating helps in decreasing the roughness of the surface, also its high resistance has an advantage to decrease the development of the of pre-discharges in the gas which will help to increase the breakdown voltage.