Rigidy Body
A Rigid Body is a system involving a large number of point masses, called particles, whose distances between pairs of point particles remains constant even when the body is in motion or being acted upon by external force.

Forces of Constraint
The internal forces that maintain the constant distances between the different pairs of point masses.

Consider a rigid body that rotates about a fixed z-axis with the origin at point O.

[math]\vec P =[/math] momentum of the center of Mass

What is the total angular momentum of the earth orbiting the sun?

There are two components

If there is only a central force

Precession of the Earth

Using the same coordinate system as above

The total Kinetic about the point O is given as

For a Rigid body

If all forces are conservative

then a Potential Energy may be defined

Then the potential energy of a rigid body is given by

Thus the kinematics of a Rigid body only needs to consider the potential energy of external forces.

Rotation about a fixed axis

As seen in the non-inertial reference frame chapter

Moments (Products) of Inertia about the fixed axis

As seen above, the angular momentum of a rigid body rotating about a fixed axis ( the z-axis in this case) is given by

Although the object was only rotating about the z-axis, there can be angular momentum components along the other directions

In other words, unlike what you learned in introductory physics

instead the general expression for angular momentum is

The Moment of Inertia for the above example is defined as

Note the negative sign is indicative of the rigid body's resistance (inertia) to have an angular momentum component that is not in the same direction as its rotation.

Example
Moment of Inertia of a sphere

Find the moment of inertia of a uniform solid sphere of Radius (R) and mass (M) about its diameter.

For a set of discrete masses

one may define the sphere's density as

A differential mass is written as

The angular momentum for a body spinning about an arbitrary axis.

As seen in the non-inertial reference frame chapter

The Moment of Inertia tensor is defined such that

Inertia Tensor for a solid cone 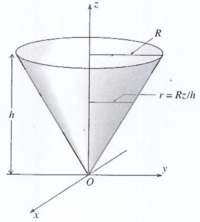 Find the moment of inertia tensor for a uniform solid cone of mass [math]M[/math] , height [math]h[/math] , and base radius [math]R[/math] spinning about its tip.

Choose the z-axis so it is along the symmetry axis of the cone.

The mass density may be written as

Using cylindrical coordinates ( [math]r, \phi, z[/math]) the volume of a cone is given by

the radius of the base of the cone may be written as a function such that [math] r=\frac{Rz}{h}[/math] .

calculating the moment of inertia about the z-axis :

and the cone is symmetric in the x-y plane

The products of inertia

From the viewpoint of the summation equation one can see that for every mass at point (x,z) there is an equal mass at the point (-x,z), Thus the sum will add to zero.

If the inertia tensor is diagonal (off diagnonal elements are zero)

Then The angular momentum points in the same direction as the angular velocity.

Precession of a Top

As shown above,the angular momentum tensor of a top rotating about its axis of symmetry with respect to its tip is 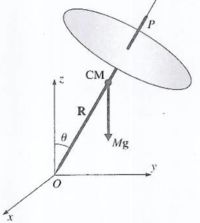 Suppose the top make a small angle [math]\theta[/math] with respect to the normal of the surface it is spinning on top of.

The resulting torque from this gravitational force is

Initially the angular velocity ( and angular momentum) are pointed along the [math]\hat k[/math] principal axis.

The direction of the external torque [math] \vec R \times \vec g[/math] is in the [math]- \hat i[/math] direction at the instant shown in the above figure. As a result the top will rotate in the counter-clockwise direction about the z-axis as viewed from above the z-axis.

As seen in the case of a precessing top above, the physics of a rotating rigid body can be more easily described when the inertia tensor is diagonal. One need only find a coordinate system in which the tensor is diagonal in order to simplify the problem.

Principal axis
The axis of rotation for a rigid body in which the moment of inertia tensor is diagonal thereby the Angular momentum will be parallel to the angular velocity.

In the above example of the top ( solid cone), the x,y, and z axes of the chosen coordinate system are principal axes of inertia and the moments of inertia are the principal moments.

One can observe from the example of a spinning top, that a rotation axis around which the rigid body is symmetry will tend to be a principal axis.

Additionally, if the body has two perpendicular planes of reflection symmetry, then the three perpendicular axes defined by these two planes and a point of rotation are principal axes.

Finding the Principal axis of a Rigid body

Once the Inertia tensor is known, the principal axes of a rigid body may be found by "diagonalizing" the tensor matrix.

The process of "diagonalizing" the tensor matrix amounts to solving an eigenvalue problem.

The angular momentum of a rigid body can be given by

In practice, one determines [math]\vec \omega[/math] ( the eigen vectors) by solving for [math]\lambda[/math] (the eigenvalues) such that

Suppose the momentum tensor is given by

Add the second row to the first row

Add the first row to the second and third row

Divide the second row by 3

Subtract the first row by the second row

The above augmented matrix represents the following system of equations

but the above needs to be a unit vector such that

Otherwise the remaining two principal axes are arbitrary and indicate that the rigid body is symmetric about these two remaining axes.

Space Frame
An inertial reference frame used to locate the center of mass of a rigid body [math](\hat i , \hat j, \hat k)[/math]

The torque in the Space reference frame is given by

one can see that

Euler's equation for the spinning top

In the case of the spinning top:

All three principal moments are different

The motion of a top is an example of this situation. As seen above for the motion of the top,

The remaining Euler equations are

The above Euler equations become

using the trick of defining a complex frequency such that

we have the first order differential equation

If we assume the initial conditions 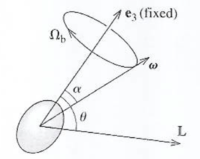 Body cone
The Body cone is defined as the orbital path taken by the top as it rotates about the [math]\hat e_3[/math] axis with the angular velocity [math]\Omega_b[/math]. The shape forms a cone relative to the rotation point of the top (the top's tip) 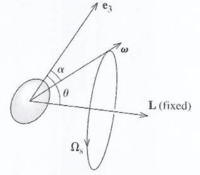