The picture below represents the relative orientation of two different coordinate systems [math](S, S^{\prime})[/math] . [math]S[/math] is at rest (Lab Frame) and [math]S^{\prime}[/math] is moving at a velocity v to the right with respect to frame [math]S[/math]. 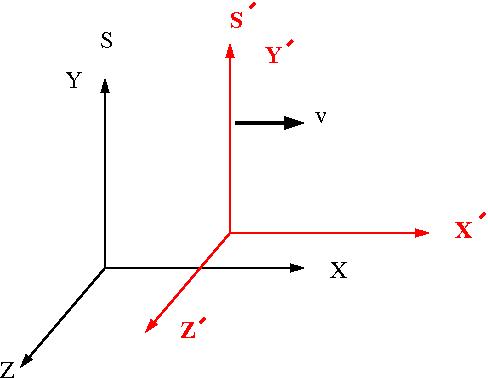 The relativistic transformation used to transform the coordinates of an object observed in the rest frame [math]S[/math] to a moving reference frame[math] S^{\prime}[/math] is given by:

Note
Einstein's summation convention drops the [math]\sum[/math] symbols and assumes it to exist whenever there is a repeated subscript and uperscript
ie; [math]x^{\mu^{\prime}} = \Lambda_{\nu}^{\mu} x^{\nu}[/math]

in the example above the[math] \nu[/math] symbol is repeated thereby indicating a summation over [math]\nu[/math].

The momentum 4 -vector is denoted as:

Or the reverse transformation

Proper Time [math]\Tau[/math]
The time measured in the rest frame of the clock. The time interval is measured at the same x,y,z coordinates because the clock chose is in a frame which is not moving (rest frame).

Proper Length[math] (c\Tau)[/math]
The length of an object in the object's rest frame.

Decay of a Particle at Rest to 2 Bodies

Our goal is to determine the momentum and energy of each pion ([math]E_1[/math] & [math]E_2[/math]) resulting from the decay of the Mother particle.

Combine this with the conservation of energy equation above:

Square both sides of the above equation

Note
[math]\vec{p}_1 = -\vec{p}_2[/math]
[math]\Rightarrow[/math] The daughter particles (pions) from the decay of the Mother particle [math](\rho)[/math] travel in opposite directions with respect to eachother ( ie; they are "back - to -back")
This means that there is no preferential direction for the decay (the particles are distributed isotropically such that they are back-to-back)

Decay of Moving Particle to 2 Bodies (decay in flight)

The center of momentum frame is moving such that

A Lorentz transformation of the kinematics for particle 1 between the Center of Momentum (cm) frame and the lab is given by:

You can now use the results for [math]E_1[/math] and [math]p_1=p[/math] from the previous section where the Mother particle is at rest to determine the kinematics of the particles in the lab frame given that you know the initial 4-Momentum of the mother particle. You will need to specify the daugher decay angles in the CM frame in order to find the momentum components [math]p_z[/math] and [math]p_{\perp}[/math].

One could also find [math]\vec{p}_1[/math] without using the Lorentz transformation. Just use conservation of Energy and Momentum:

Solve the conservation of momentum equation for [math]p_2^2[/math]

and substitute the above for [math]p_2^2[/math] in the Conservation of Energy equation above. The dot product gives you the angle between the daughter momentum and the Mother momentum ([math]\theta_1[/math]) as a variable. After a lot of algebra you can show that

In order for a real solution

Now lets consider the case where a Mother particle of mass [math]M[/math] decays into 3 daughter particles of masses [math]m_1[/math], [math]m_2[/math], and [math]m_3[/math]. The 4-mometum conservation is written as

The following invariants are defined

The invariants [math]s_1[/math], [math]s_2[/math] and [math]s_3[/math] are not independent (the motivation for what is known as a Dalitz plot). Based on the definitions of these invariants and 4-momentum conversation one can show that

Also Note
[math]\sqrt{s_1}[/math] is the invariant mass of a subsystem defined by treating daughter particles 2 and 3 as one object. similar interpretations for [math]\sqrt{s_2}[/math] and [math]\sqrt{s_3}[/math].

In the Center of Momentum system we have the

so the limits of s_1 are

Suppose we wish to plot a curve which describes the depence of s_1 on s_2 (determine s_2 as a function of s_1). This is refered to as a Dalitz plot in which [math]s_2[/math] appears on the x-axis (abscissa) and [math]s_1[/math] appears on the y-axis (ordinate). Becuase of the "squares" in the invariant mass, we can have two values of [math]s_2[/math] for a given value of [math]s_1[/math].

In the JF frame

The function [math]\lambda[/math] is defined such that

since this solution above is so common in relativistic kinematics

Doing an analogous calculation for the other form os s_1

The above equation for [math]s_2[/math] defines a boundary line of the Dalitz plot. The kinematics of the particles in constrained to the interior of this bounding.

The image below is from experiment E698 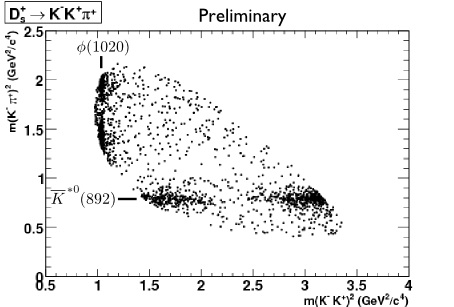 and then the [math]\phi[/math] decays via

Notice that the dark bands are not infinitely thin but have widths as well. The uncertainty principle ([math]\Delta E \Delta t \gt \hbar[/math]) suggest that only a particle with an infinite lifetime can have a finite , well defined, mass. The width of these dark bands can be used to determine the lifetimes of the intermediate [math]\phi[/math] and [math]\bar{K}^{*0}[/math] states.

Also notice that there are 2 "clumps" of darks spots in each dark band. The limits for [math]s_2[/math] where based on Min/Max values of the [math]\cos(\theta_{13})[/math] term. This term tells us how aligned or misaligned the momentum vecors of [math]m_1[/math] and [math]m_3[/math] (the Kaons)are.

You can show that

The momentum transfer squared is given by

In the case of electron scattering

solve for final proton momentum 4-vector and determine the length

Tranform to Center of Mass

A relativistic transformation from a rest frame where [math]E,\vec{p}[/math] are given to a frame moving with velocity [math]\beta[/math] is given by

[math]E_1,\vec p_1[/math] are the energy and momentum for the incident particle
[math]m_2[/math] is the mass of the target particle

set the momentum four vector for an 11 GeV electron

The invariant mass of the particle is given by

The Beta and Gamma of the Particle are Given by

assume you moller scatter off a free electron at rest.

A final state moller scattering event from GEANT4 has