Due to the random errors present in any experiment we should not expect [math]x_i = x[/math].

If we neglect systematic errors, then we should expect [math] x_i[/math] to, on average, follow some probability distribution around the correct value [math]x[/math].

This probability distribution can be referred to as the "parent population".

The word "average" is used to describe a property of a "parent" probability distribution or a set of observations/measurements made in an experiment which gives an indication of a likely outcome of an experiment.

and is commonly referred to as the "sample" average or "sample mean".

Definition of the mean

Here the above average of a parent distribution is defined in terms of an infinite sum of observations ([math]x_i[/math]) of an observable x divided by the number of observations.

This definition uses the assumption that the result of an experiment, measuring a sample average of [math](\bar{x})[/math], asymptotically approaches the "true" average of the parent distribution [math]\mu[/math] .

The word "variance" is used to describe a property of a probability distribution or a set of observations/measurements made in an experiment which gives an indication how much an observation will deviate from and average value.

the deviations should average to ZERO for an infinite number of observations by definition of the mean.

Definition of the average

the deviation average would be given by

A typical variable used to denote the variance is

and is defined as

The mean should be thought of as a parameter which characterizes the observations we are making in an experiment. In general the mean specifies the probability distribution that is representative of the observable we are trying to measure through experimentation.

The variance characterizes the uncertainty associated with our experimental attempts to determine the "true" value. Although the mean and true value may not be equal, their difference should be less than the uncertainty given by the governing probability distribution.

Another Expression for Variance

and a variance given by

If the "Parent Population" is not known, you are just given a list of numbers with no indication of the probability distribution that they were drawn from, then the average and variance may be calculate as shown below.

The "unbiased" variance of the above sample is defined as

"true" variance of the above sample as

If the measurements are all independent

The above is the essence of counting statistics.

Where does this idea of an unbiased variance come from?

Using the same procedure as the previous section let's look at the average variance of the variances.

[math]\frac{\sum \sigma_i^2}{N} =[/math] an average of all possible sample variance which should be equivalent to the "true" population variance.

Mean(Expectation value) and variance for a Given Probability Distribution

For a Discrete probability distribution

Mean of a continuous probability distibution

The expectation value for a continuous probability distribution is calculated as

Variance of a discrete PDF

Variance of a Continuous PDF

then the expectation value of [math]f(x)[/math] is

or if a continuous distribtion

The Uniform probability distribution function is a continuous probability function over a specified interval in which any value within the interval has the same probability of occurring.

Binomial random variable describes experiments in which the outcome has only 2 possibilities. The two possible outcomes can be labeled as "success" or "failure". The probabilities may be defined as

p
the probability of a success

q
the probability of a failure.

Experiments with [math]n=1[/math] are also known as Bernoulli trails.

Then [math]X[/math] is the Binomial random variable with parameters [math]n[/math] and [math]p[/math].

To calculate the variance of the Binomial distribution I will just calculate [math]E[x^2][/math] and then subtract off [math]\left ( E[x]\right )^2[/math].

The number of times a coin toss is heads.

Suppose you toss a coin 4 times.

Here are the possible outcomes

How many possible ways can you get all tails (x=4).

The probability of order #1 happening is

The probability of observing the coin land on heads 3 times out of 4 trials is.

A die is a 6 sided cube with dots on each side. Each side has a unique number of dots with at most 6 dots on any one side.

P=1/6 = probability of landing on any side of the cube.

If we roll the die 10 times what is the probability that X dice will show a 6?

A success will be that the die landed with 6 dots face up.

So the probability of this is 1/6 (p=1/6) , we toss it 10 times (n=10) so the binomial distribution function for a success/fail experiment says

The poisson distribution overcomes this problem by defining the probability in terms of the average [math]\mu[/math].

Poisson as approximation to Binomial

The Binomial Probability Distriubtions is

This leave us with

The mean free path of a particle traversing a volume of material is a common problem in nuclear and particle physics. If you want to shield your apparatus or yourself from radiation you want to know how far the radiation travels through material.

The mean free path is the average distance a particle travels through a material before interacting with the material.

Now we wish to find the probability of finding [math]N[/math] events over a distance [math]x[/math] given the mean free path.

The above expression represents the probability for a particular sequence of events in which an interaction occurs after a distance [math]dx_1[/math] then a interaction after [math]dx_2[/math] , [math]\dots[/math]

where the first interaction occurs after the distance [math]x_2[/math].

The N! accounts for the degeneracy in which for every N! permutations there is really only one new combination. ie we are double counting when we integrate.

we end up with

For Homework you will show, in a manner similar to the above mean calculation, that the variance of the Poisson distribution is

The Gaussian distribution is accepted as one of the most likely distributions to describe measurements.

The half width [math]\Gamma[/math] is used to describe the range of [math]x[/math] through which the distribution's amplitude decreases to half of its maximum value.

The Binomial Probability distribution is given as

Take the natural logarithm of both sides

In the Poisson distribution

The Gaussian distribution is our first continuous distribution as the variables are real numbers. It is not very meaningful to speak of the probability that the variate (x) assumes a specific value.

The advantage of this definition becomes apparent when you are interested in quantifying the probability that a measurement would fall outside a range [math]\Delta x[/math].

The Cumulative Distribution Function (CDF), however, is defined in terms of the integral from the variates min value

The probability that a student fails this class is 7.3%.

What is the probability more than 5 student will fail in a class of 32 students?

In the above example you calculated the probability that more than 5 student will fail a class. You can extend this principle to calculate the probability of taking a measurement which exceeds the expected mean value.

One of the more common consistency checks you can make on a sample data set which you expect to be from a Gaussian distribution is to ask how many data points appear more than 2 S.D. ([math]\sigma[/math]) from the mean value.

The CDF for this is

The probability is one which you can compute.

Below is a table representing the cumulative probability [math]P_G(x\lt \mu - \delta \mbox{ and } x\gt \mu + \delta , \mu, \sigma)[/math] for events to occur outside and interval of [math]\pm \delta[/math] in a Gaussian distribution 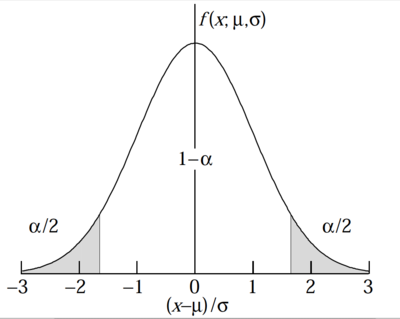 In Mathematics, the Cauchy distribution is written as

Note; The probability does not fall as rapidly to zero as the Gaussian. As a result, the Gaussian's central peak contributes more to the area than the Lorentzian's.

This distribution happens to be a solution to physics problems involving forced resonances (spring systems driven by a source, or a nuclear interaction which induces a metastable state).

A Beit-Wigner function fit to cross section measured as a function of energy will allow one to evaluate the rate increases that are produced when the probing energy excites a resonant state that has a mass [math]E_0[/math] and lasts for the time [math]\tau[/math] derived from the Half Width [math]\Gamma[/math].

Mean is not defined

The above integral does not converge for large z [large deviations [math](x -\mu)[/math]] . The width of the distribution is instead characterized by [math]\Gamma[/math] = FWHM

where [math]c[/math] is any positive real number.

The above distribution was derived by Landau (L. Landau, "On the Energy Loss of Fast Particles by Ionization", J. Phys., vol 8 (1944), pg 201 ) to describe the energy loss by particles traveling through thin material ( materials with a thickness on the order of a few radiation lengths).

Bethe-Bloch derived an expression to determine the AVERAGE amount of energy lost by a particle traversing a given material [math](\frac{dE}{dx})[/math] assuming several collisions which span the physical limits of the interaction.

For the case of thin absorbers, the number of collisions is so small that the central limit theorem used to average over several collision doesn't apply and there is a finite possibility of observing large energy losses.

As a result one would expect a distribution which is Gaussian like but with a "tail" on the [math]\mu + \sigma[/math] side of the distribution.

Climatologists use this for predicting how rain fluctuates from season to season.

Measures the symmetry of the distribution

The higher the number the more asymmetric (or skewed) the distribution is. The closer to zero the more symmetric.

Measures the "pointyness" of the distribution