Bhabha scattering identifies the scatterng of an electron and positron (particle and anti-particle). There are two processes that can occur

1.) scattering via the "instantaneous" exchange of a virtual photon

2.) annihilation in which the e+ and e- spend some time as a photon which then reconverts back to an e+e- pair

The Feynman diagram is a space-time description of the interaction where the horizontal axis (abscissa) is used to denote time and the vertical axis (ordinate) is 3-D space. 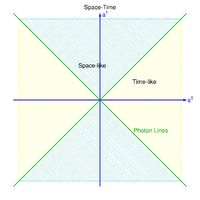 If the electron and positron simply scatter off of one another via a coulomb interaction, then they exchange a photon along the space axis. You start with an external line from the left to represent the electron. This is a "t-channel" process in which one of the particles emits a virtual photon that is absorbed by the other particle (the internal photon connects two vertices). You can tell the exchanged particle is virtual if it is drawn parallel to the time axis in the Feynman diagram.

The time axis is from left to right so the Virtual particle is along the space axis (in some books the diagram has the space axis horizontal). Also note that a virtual, neutral Z-boson may also be exchanged via the electro-weak interaction.

Momentum conservation at the electron vertex

writing conservation of momentum as a delta function

The positron absorbs the photon emitted by the electron

because of the arrow for anti-particles the final state u_4 appears on the most left hand side as the initial state.

Working with the first set of matrices

Using the above relation for the matrix element

Ignoring the particle masses because we are in the relativistic limit

Mandelstam variables are defined as

Momentum conservation at the first vertex
[math]p^{\mu}_{1}(e^-) + p^{\mu}_{3}(e^+) = p^{\mu}_{out}(\gamma) [/math] Unlike scattering the e- state combines with the e+ state to emit a photon which will then produce an e+e- pair some time later. So the initial 4-momentum of the two incident particles combines to form the 4-momentum of the intermediate state

Initially an electron annihilates with a positron to form a photon

The photon converts back into an electron-positron pair

The overall amplitude ([math]\mathcal{M}_{tot}[/math]) is the coherent sum of the individual amplitudes. In the case of annihaltion (s-channel) the Feynman diagram depicts particle becoming anti-particles and the reverser. A "-" sign is introduced to "Asymmetrize" the amplitude and account for particles simply interchanging with their anti-particle.

According to the Feynman RUles for QED:

is used at the vertex to describe the Quantum electrodynamic (electromagneticc) interaction between the two fermion spinor states entering the vertex and forming a photon which will "connect" this vertex with the next one.