Working with a beam of electrons, we can define a pulse as n charges per unit volume, each carrying charge q and moving with speed [math]v_d[/math]. Defining [math]v_d[/math] to be the time-average speed of the electrons, we can find the number of particles within a beam. If A is the beam cross-sectional area, then l, the length of the pulse , has a volume Al with nAl charges within its bounds. Since each electron carries charge q, the total charge is 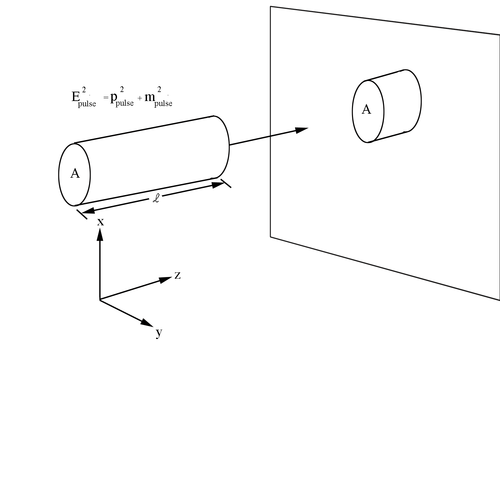 Defining the charge density as

The total current is

Having this equation operate on a particle's wave function, we can obtain the relativistic Schrödinger equation, also known as the Klein-Gordon equation.

The Klein-Gordon equation can be written as

Multiplying by the complex conjugate

From the conservation of probabilty, we know that

This can be written in the form

The number of stationary target particles per unit volume is

Using the relativistic definition of energy

Letting [math]E_{21}\equiv E_2[/math] be the energy of particle 2 wiith respect to particle 1, the relativistic energy equation can be rewritten such that

where similarly [math]p_{21}[/math] is defined as the momentum of particle 2 with respect to particle 1.

The relative velocity can be expressed as

The invariant form of F is