The [math]\theta[/math] angle was measured as shown below in the picture: 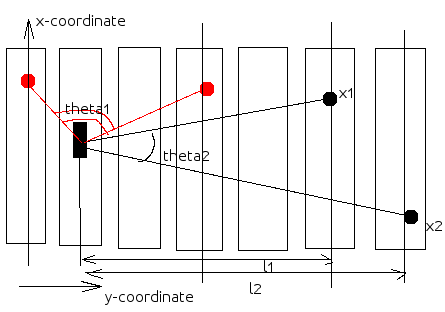 The [math]\phi[/math] angle was measured as shown below in the picture:

The X-coordinate of the neutron hit of each detector was determined from the TDC difference spectra with application of real calibration factors obtained in separate experiment with Co-60 source. As an example of the cuts applied see the plot below: 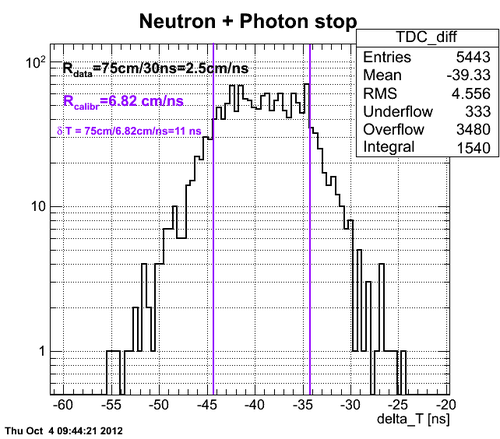 The data from the current run 4118 are plotted below: 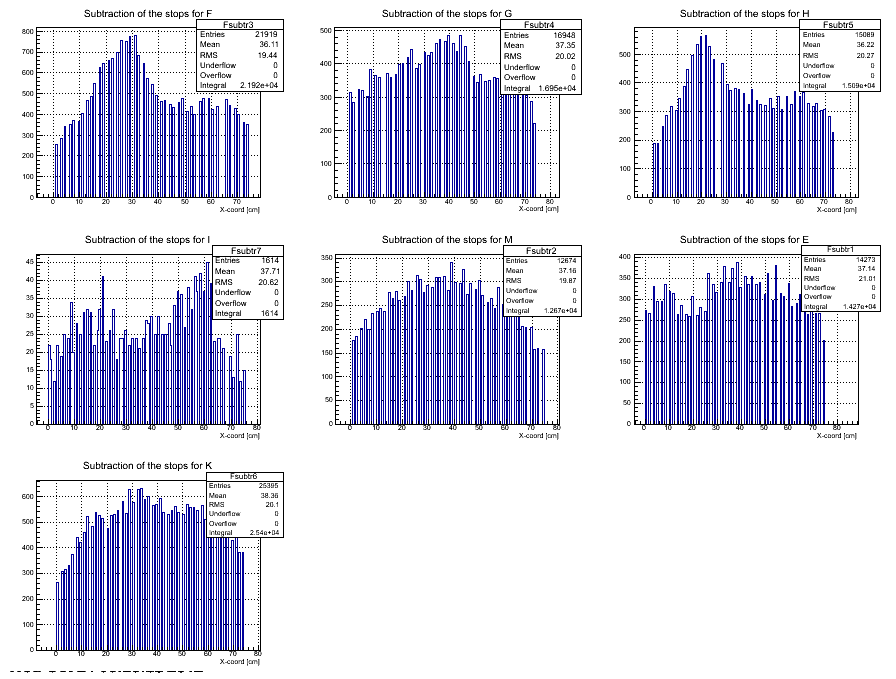 And the same data on the linear scale:

The timing cuts were applied for TDC sum spectra. It should be noticed that time cuts included both neutron and photon areas because in four fold coincidences the photon accidentals will dissappear. 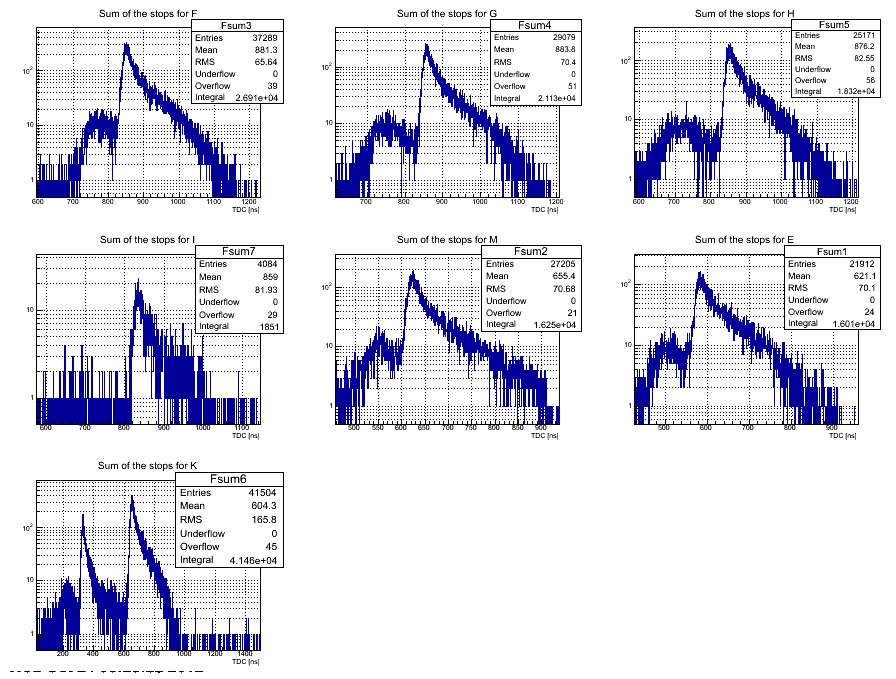 In the case of Det K it was hard to observe the neutron area and the TDC singles spectra were used to set the time cut (see Det K data on the plot below): 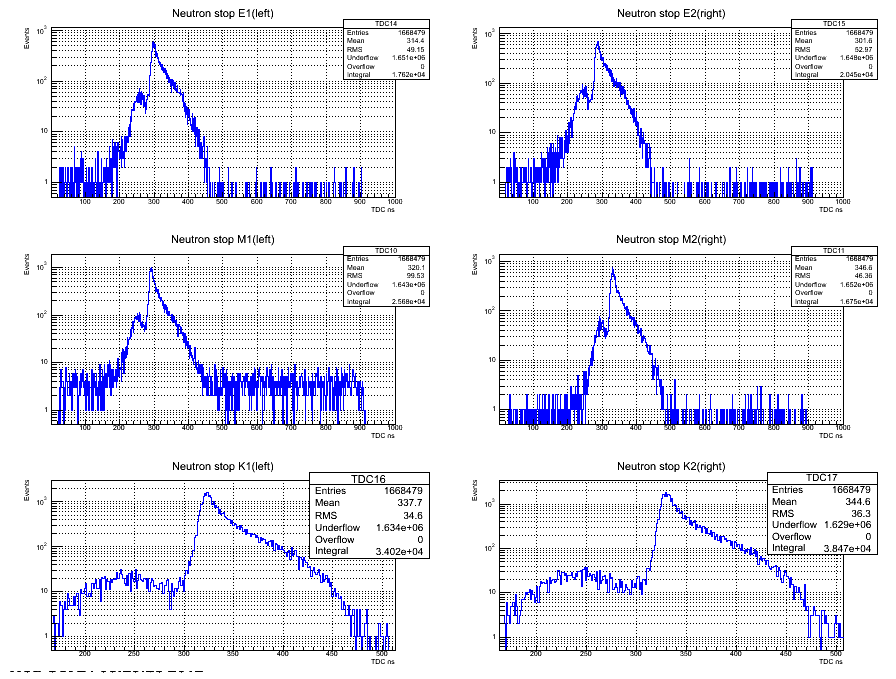 If we make 4x coincidences between the detectors with the timing cut on the neutron region only (no conditions applied on the x-ccordinate hit), we'll get 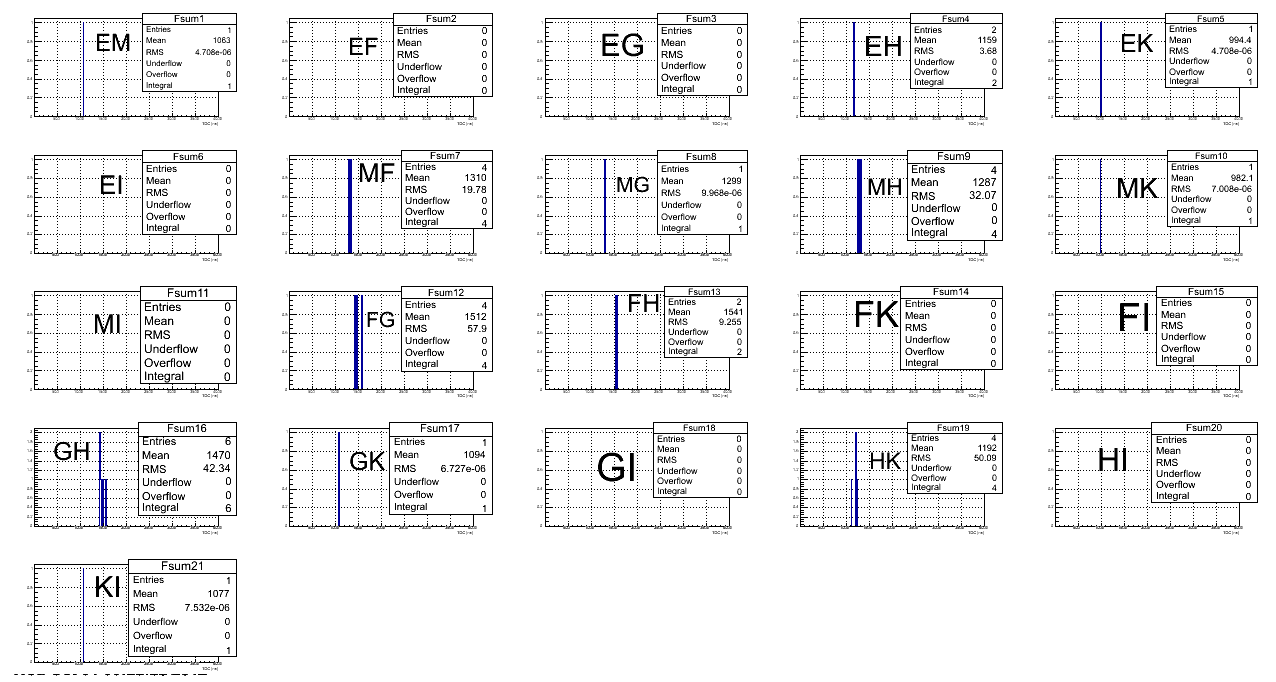 The total number of coincidences is 31.

If we make 4x coincidences between the detectors with the timing cut on the neutron and photon regions (no conditions applied on the x-ccordinate hit), we'll get 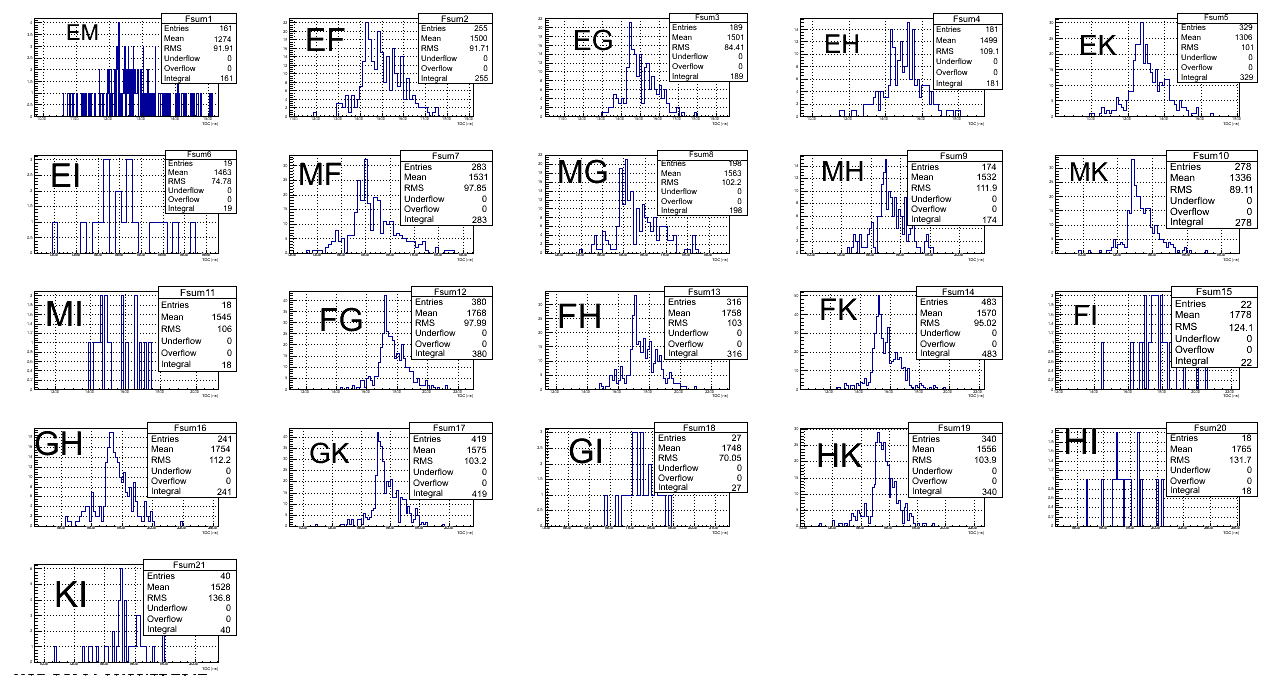 The total number of coincidences is 4371.

neutron_angle_phi.png The data bank was created for single run and file looked like the one on the picture below:

The first column of data obtained for each detector is the event number and the second one is the x-coordinate of neutron hit.

After processing of the main data bank the 2n coincidences were extracted for each possible detector hit combinations. The example of the data file for 2n coincidences of Det F and Det G is presented below: 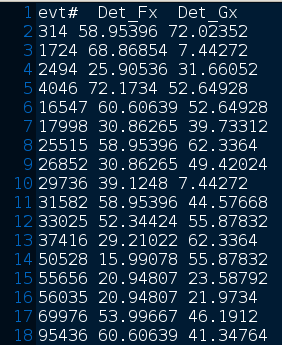 After writing a bunch of scripts the root file was created and the data are plotted below: 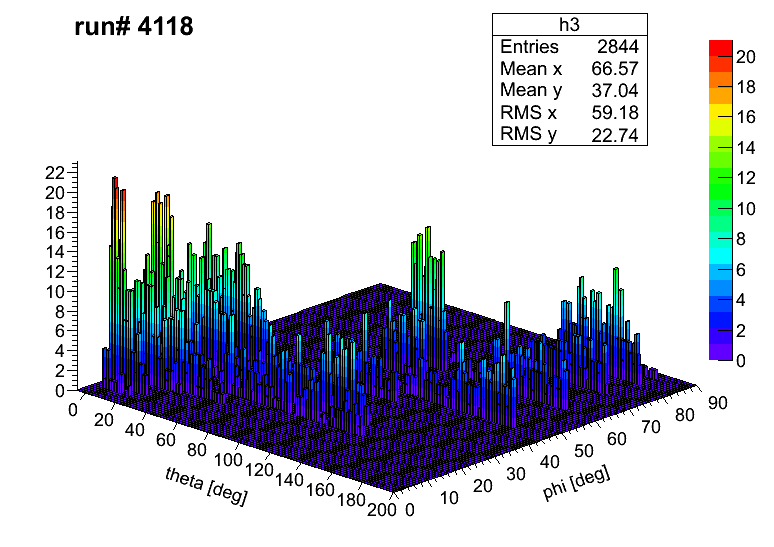 In order to see better [math]\theta[/math] and [math]\phi[/math] distributions it was created a couple of plots with corresponding projections:

[math]\theta[/math] projection of the 3D plot 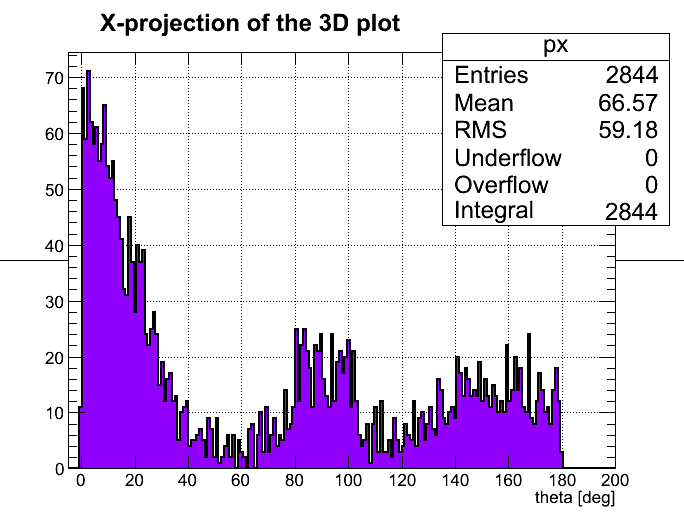 [math]\phi[/math] projection of the 3D plot 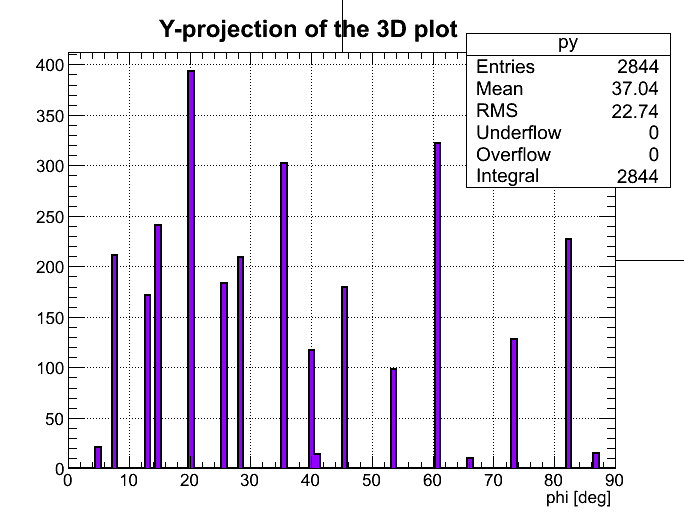 The uncertainties on the [math]\phi[/math] angle are determined by the width of the neutron detectors and the distance from the target.

The uncertainties on the [math]\theta[/math] angle are determined by the width of the TDC difference spectra. Should be discussed.

2n opening angle after taking into account the z-coordinate

The 2n opening angle after taking in th account the z-coordinate of the vertex and timing cuts including both neutron area and photon region: 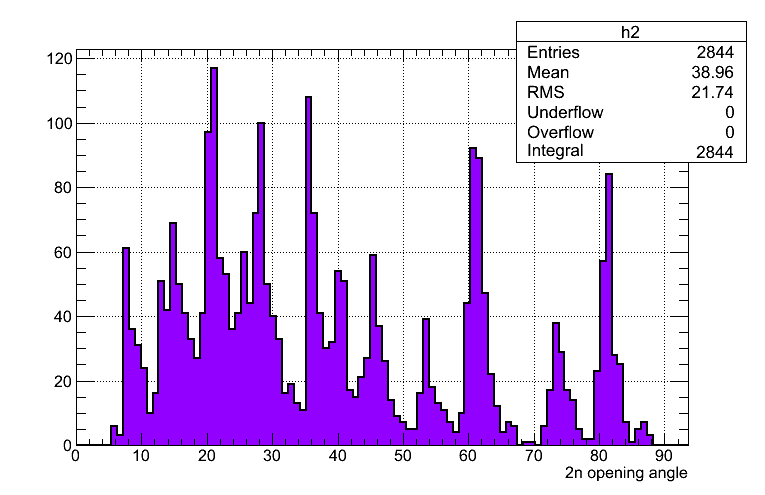 The 2n opening angle after taking in th account the z-coordinate of the vertex and timing cuts including neutron region only: 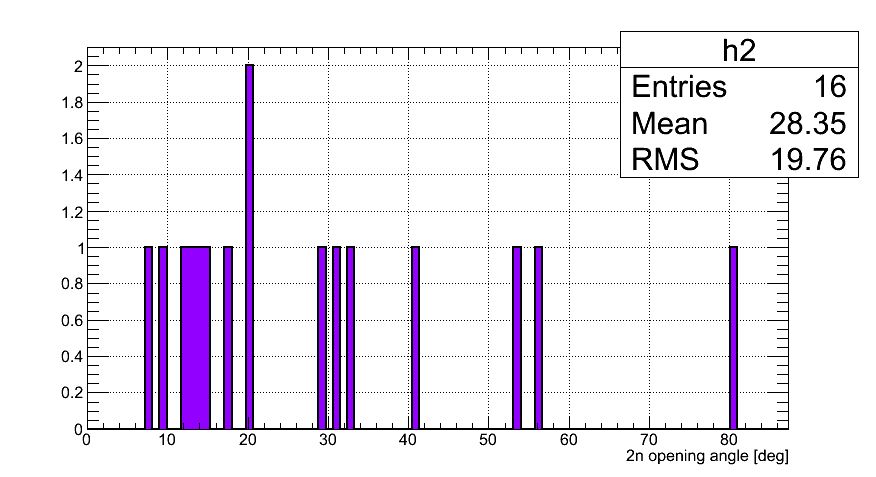 Simulation of neutron angular distribution after the deuteron photodisintegration

The simulation of neutron angular distribution has been done using D2 sphere of diameter 6 cm and monoenergetic 5 MeV photn beam ([math]10^6[/math] photons) going along the z-axis. The neutrons were observed outside of the sphere. The physics for neutron interaction with the matter was off to prevent the material of the target to obscure the angular distribution. Physics of photonuclear reactions was on.

In these coordinates the neutron angular distribution looks like: 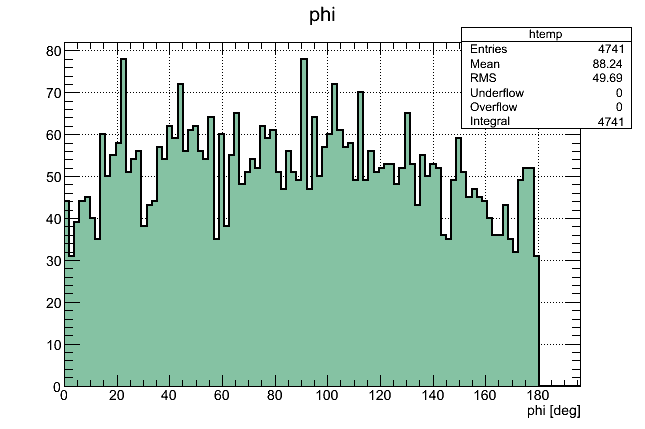 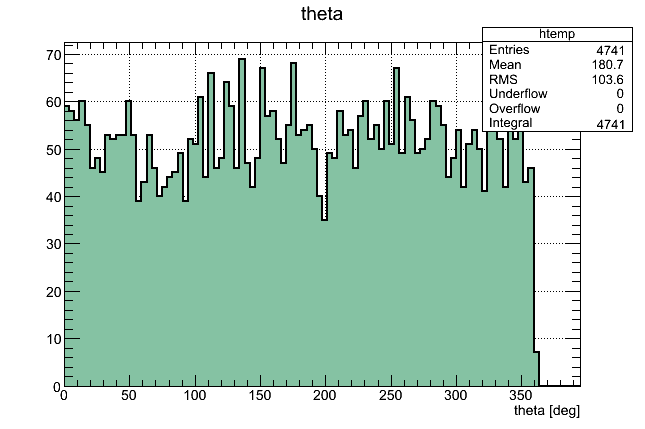 So the [math]\phi[/math] distribution of neutrons (in the coordinate system described above) should look like: 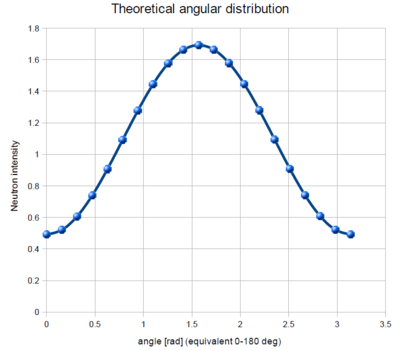