Week of the 6th

I acquired and installed GEMC, COATJAVA, and CED on Ubuntu 16.04. Installation instructions can be found here.

GEMC and the common environment are found here

There was some trouble in installing the common environment (ce) due to an awk program (mawk, in this case) segfaulting. I was able to get around this by downloading a different awk program, gawk. After downloading the ce I had some trouble with the default version of Geant4; updating the Geant4 version numbers in ce/settings.xcconfig and ce/versions.env to 4.10.04.p01 resolved the issue.

After the GEMC install proper, it was also necessary to install the clas12Tags repository, where scons took issue with an undefined variable in physcisList.cc. Uncommenting the line which defined theParticleIterator allowed the tags to be compiled.

Release versions can be found here. Otherwise, one must clone either the development version or a fork of it.

Attempting to run any of the coatjava scripts with ./ChupaThingy throws a source not found error, use bash ChupaThingy instead.

Downloads can be found here.

Finished Troubleshooting installs for the most part.

Wasn't seeing any meaningful events from GEMC. Took the issue up with Dr. Forest who showed that it was likely a combination of bad starting vertex placement and small sample size. He suggested using Lund files instead. I currently have one that produces 26 usable events. In time I'm going to have to learn to create my own.

Spent some time learning how to format the wiki.

Spent Monday and most of Tuesday updating this wiki and tackling the database problem.

The version of clas12Tags I'm for using for GEMC (4a.2.3) doesn't seem to use the database at all. Will try with 4a.2.2 and see if that uses the database at all. As for the IDE, I've set up the environmental variables CCDB_CONNECTION=sqlite:///../../DB/clas12.sqlite.05162018 and CCDB_DATABASE=../..DB/clas12.sqlite.05162018. The previous version of clas12.sqlite I was using apparently lacked some fields that coatjava wanted, but this one appears to work.

Spent the rest of the week updating the wiki and defining the reconstruction elements. 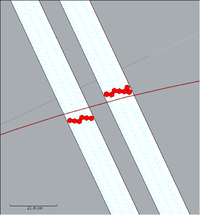 Screenshots of IDE output window with and without non-zero vertex. 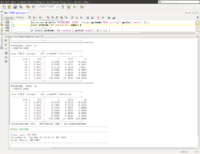 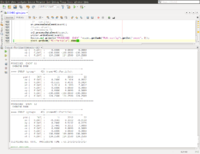 I have come to the conclusion that my current method of going through the code and exhaustively defining all of the variables and functions is a fool's errand. The current plan is to find tools to build UML diagrams from the code itself and find an easy way to build flowcharts.

Currently attempting to figure out how to use the easyuml plugin for NetBeans. While I can make uml diagrams for single classes, I can't seem to get even an inheritance tree working.

I believe the CAEN Mod. N842 CFD that I"m using is not working to spec. After looking at the documentation, It should be triggering at voltages well below -5mV, but it isn't.

Procured an Ortec 672 Spec Amp from the IAC.

Had significant problems with the audio and missed much of the call.

Week of the 3rd

Created a flowchart to describe the connections between the electronic components of the setup.

Collected data with the threshold set in increments of 10mV between 10-250mV, inclusive. Didn't find the end of the plateau... will consult with Forest.

Added a CAEN N110 Dual attenuator between the spec amp and LED. Set to 20 dB should result in a 90% reduction of voltage.

When set to not attenuate, I'm still getting attenuation ~90% at 20mv. When set to 20dB, it appears to be attenuating more than that.

Discussed with Forest what exactly I'm doing as I've lost the thread a little. My current goal is to dig into the code in the direction of the Swimmer so that I can understand what is occurring there and modify it.

Characterized attenuator with pulse generator, It appears to be working more or less exactly as it should now that Forest has corrected my screw-ups. Took data points with the attenuator now mixed in: 1-15mV in 1mV increments, 15-45 in 5mV increments, and 45-55 in 1 mV increments.

Added the attenuator to the Hardware Flowchart.

Learned how to use Grace (graphing tool).

Finished Taking data for the no source run. Produced graphs using that data. Will wait for Forest's approval of those before taking data with the source.