The following is intended for an audience of High school teachers and their students.

What is a Cosmic Ray

Cosmic rays are particles originating outside the earth which hit the Earth's atmosphere. Cosmic rays are made up of all the elements in the periodic table.

The term cosmic rays usually refers to Galactic cosmic rays that are further divided into two categories; either galactic or extragalactic.

Galactic
Galactic cosmic rays are all particles which enter our solar system from our galaxy.

Extragalactic
Extragalactic cosmic rays flow into our galaxy having energies beyond [math]10^{15}[/math] eV (amount of energy your body creates in 1/1000 of a second). They are very rare with only 1 entering a square meter on the earth's surface per year. 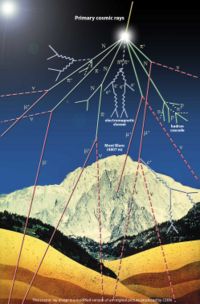 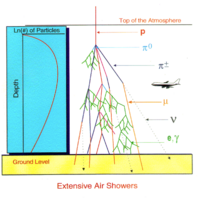 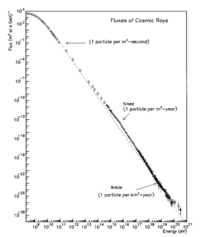 The more energetic muons are the most penetrating through buildings and are the dominant signal source for nuclear physics labs which tend to be underground or in basements of buildings.

How are Cosmic Rays created

How do we detect cosmic rays

Scintillators are plastic rectangular paddles which have been polished improve the transmission of light out of the plastic and doped to enhance the propagation of light within the plastic. Five of the 6 sides are covered with a reflective material (aluminized mylar) which reflects light back into the plastic material in order to direct the light out of the 6th side with has a detector capably of measuring light (Photo-Multiplier Tube, PMT).

Within the plastic scintillator we would like the light to propagate in time scales which are a lot smaller than the mean time between atomic collisions. The mean time between collisions in a solid is about [math]10^{-10}[/math] seconds. Unfortunately an atom takes about [math]10^{-9}[/math] seconds to de-excite. This means that an atom will have at least 10 opportunities to release energy by collission before is has a chance to release energy by giving off light. Doping the plastic with material composed of Benzene rings is the means by which the plastic becomes transparent to the propagation of light. The Bezene ring has the nice feature that the electrons in the material are not localized to the atom. The "Pi" orbitals of the electrons in the material do not notice the atomic collsions. A charged particle will excite the electrons in the Benzene ring to a higher orbit (S1).

Another nice feature of the Benzene ring is the existence of vibrational states in the ground state. When the electron in the Benzene ring de-excites by emitting a photon it has several ground states to choose from due to the vibrational splitting of the ground state. As a result the emitted photon is less likely to have the energy needed to excite or ionize the next Benzene atom it encounters. This makes the plastic transparent to the the photon.

The Cosmic Telescope consists of two Scintillators ( 4 cm x 2 cm area, 1 cm thick) with PMTs connected to them. These Scintillators are separated by 2.5 cm and mounted in a long piece of PVC pipe. This pipe is connected to a sturdy base of wood and is able tilt in order to measure angular distributions. High Voltage Units are plugged into each Scintillator. 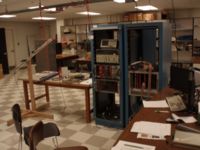 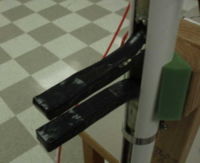 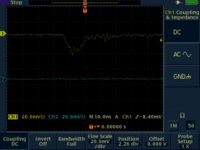 To discriminate between noise and a signal, the output of each scintillator is sent to a Quad Discriminator. The discriminator threshold is changed until the cosmic particle flux (rate) becomes independent of the threshold. If the threshold is too low the rate will be high and change abruptly with the noise on the threshold. If the threshold is too high you have an cosmic energy cut which is far above the detector noise. The mere existence of a threshold causes you to iinvoke a cut on the energy of the cosmic ray. Bu the noise of the detector also places a low energy limit on the cosmic ray you can detect. Below you see the count rate from each PMT as a function of the discriminator threshold setting. The rate appears to be constant after about 225 mV for both PMTs. If you change the HV on any tube you will need to do this again. 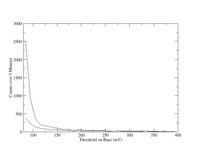 This is where the threshold of 225mV is kept constant. From this unit the top scintillator is plugged into a Singles Counter.

The next objective is to count the number of times a cosmic ray passes through both scintillator paddles. The scope picture below shows such an event. 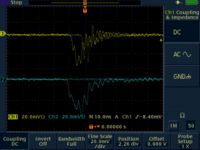 A second output from the descriminator is sent to a Logic Unit. The logic unit looks for the coincidences and when one is found and output signal is sent into a scalar which is incremented with each pulse.

Cosmic rates measured each hour when the telecope accepts cosmics which intersect the earth's surface perpendicularly (defined as zero degrees).

Why [math]\sqrt{N}[/math]?
What probability distribution would describe our measurements?
If we define the observation of a cosmic ray as a success then we might consider using the binomial distribution (coin flip). But the probability of success is less than 0.3 (PMT QE) which if you consider is small would suggest that the process may be describes by the poisson distribution. The variance of a poisson distribution is given by the square root of the mean [math](\sigma^2 = \mu)[/math] .

Here is what the rate looks like after 2 months of data taking. 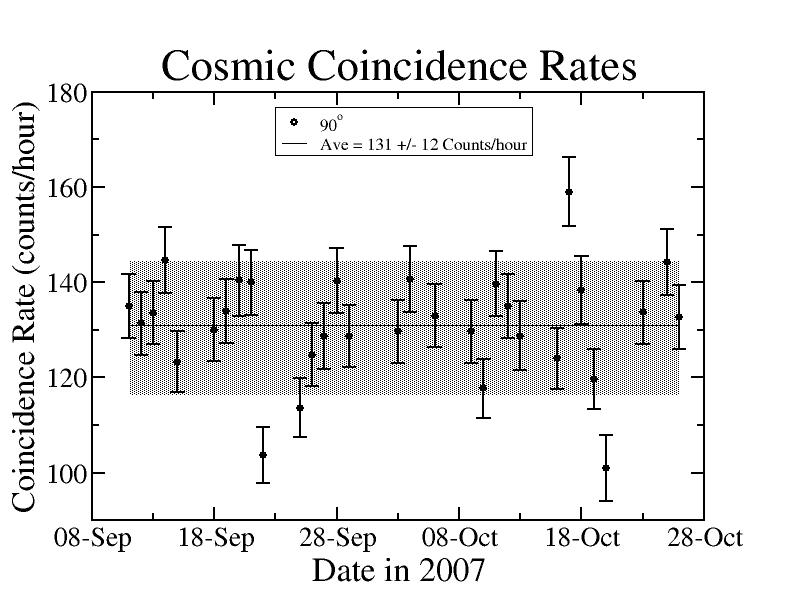 The cosmic ray flux to be detected can be calculated by applying the above definition.

PMTs are only about 30% efficient at detecting light. 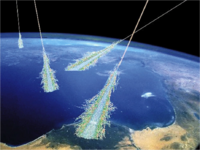 The mean free path (distance such a cosmic would travel before interacting) is more than 50 Mpc and there do not appear to be any sources for such high energy cosmics within 50 Mpc of earth.

So where are them coming from?

Such high energy cosmic rays are detected using air flourescence. As a high energy cosmic ray interacts with the upper atmosphere it causes the particle cascades known as extensive showers. The charged particles from these cascades excite the nitrogen in our atmosphere resulting in the emission of ultra-violet light. It is like watching a meteor burn up in the atmosphere except here the observable is a UV light trail.

The HiRes detector is a system of several mirrors pointing at the atmosphere which focuses their light onto a PMT. They originally started out with 21, 5 m^2 area mirrors and 256 PMTS. The mirrors spanned 3 - 17 degrees on the horizon. In 1999, the detector completed upgrading to a total of 41 mirrors spanning 3-31 degrees. They look for tracks having an arc length of 8 degrees. The detector requires clear and dark nights to operate and is sensitive to atmospheric conditions.

The AGASA detector in Japan uses the same method to detect tracks but supplements the system with a set of scintillator detectors which are shielded by lead to be sensitive to high energy muons.

At a January 12, 2005 conference of the American Astronomical Society, particle physicist Glennys Farrar presented a paper tracing five similar very-high-energy cosmic rays, all of which were detected between 1993 and 2003, to a pair of colliding galaxy clusters 450 million light-years from Earth. Farrar speculated that the clusters' powerful magnetic fields could become warped in the collision, accelerating charged particles to the extreme energies astronomers have observed.

In June 20,2006, the NSF provided $2.4 million to upgrade the "telescope" by relocating it to a larger area and install more scintillators designed to improve is cosmic ray detection sensitivity an order of magnitude. The "telescope" will be composed of a ground array of 564 table-shaped scintillation detectors, each about 3 feet tall and 6-by-10-feet wide. The scintillation detectors will be spread in a grid over an 18-mile-by-22-mile area west of Delta. The BLM right-of-way grant/temporary use permit will allow scientists to build the central laser facility and install 460 of the scintillation detectors on BLM land, which covers 80 percent of the observatory site.