The He3 detector is shrouded in BorAl, in a triangular configuration with +1250V to the pre-amp (this voltage is based on previous work by Jeff Burggraf and David Friant).

The thermalizing box is designed as regular poly surrounding the Cf-252 source on all sides except the side in the direction of the He3 tube.

The thermalizer is considered a regular poly sheet that can be slid in and out of the experimental setup.

The detector is ~30cm from the Cf-252 source. This allows for enough distance to insert 8" (20.32cm) of green borated poly, a 1" (2.54cm) thermalizing sheet, and still have the BorAl in the correct position.

No lead was included in the setup as it was not necessary.

The discriminator threshold was not changed during this experiment as it is in the center of the plateau work done by David Friant. See plot below. 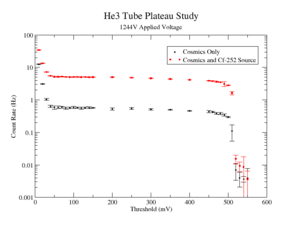 Credit: David Friant. This plot is source in and source out He3 tube plateau measurements which were used to base discriminator and bias voltages for attenuation measurements.

I will be performing background runs overnight due to the low amount of background counts. This is necessary to get an acceptable level of uncertainty in the measurements as the count rate looks to be on the order of .5Hz.

The first run background run is taking place the evening of 6/25/21 and will end the following day. 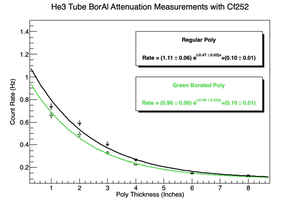 Completed attenuation measurements with differing thicknesses of Borated Poly vs unborated poly with the He3 detector shielded by BorAl.