To ensure that all the electrons simulated in GEMC are Moller electrons, electrons are first creating in the center of mass frame after scattering has occured. In this frame, the Moller differential cross section is well defined, and can be used to ensure that all particles to be simulated in other frames of reference will be Moller electrons. Due to the fact that GEMC simulations will utilize particle momentum in the lab frame, this imlies the LUND files must contain lab frame information. The transformation from CM to lab frame can be done using Lorentz boosts. In addition, all the data given is for 11GeV electrons that have not yet had the chance to interact with the target material. This implies that all electrons have the same incident energy in the lab, and as such have a constant value in the CM frame.

In the lab frame there are 2 degrees of freedom, i.e. [math]P_{\theta}[/math] and [math]P_{\phi}[/math] . The number of degrees of freedom can be reduced to 1 degrees of freedom in the center of mass frame of reference since the Moller differential cross section does not rely on [math]\phi[/math] and all energies are considered equal in the CM frame. The simplicity of the center of mass frame for Moller electrons is that the interacting particles have equal energies and equal but opposite momentum vectors. In such a system where these conditions must be met, the directions of the momentum vectors must be opposite, which reduces the degrees of freedom to one direction. Since the Moller differential cross-section only relies on [math]\theta[/math] in all frames it implies for a given angle [math]\theta[/math] we should find the same results for any given angle [math]\phi[/math].

To ensure that we can produce the Moller differential cross section in the center of mass frame we start with a uniform isotropic distribution of Moller electrons with respect to the scattering angle theta. From this distribution, each particle can be applied an appropriate weight that will result in the differential cross section being reproduced. 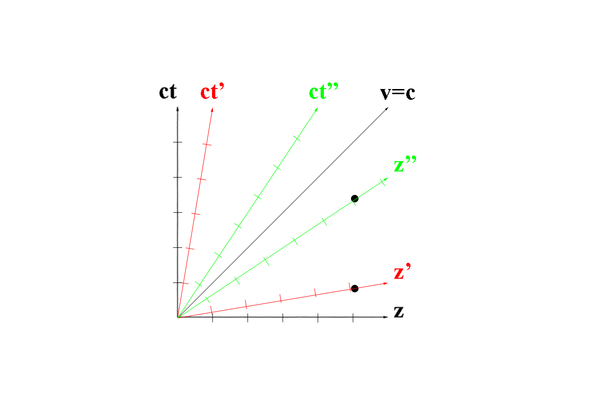 Figure 2: A Mankowski diagram demonstrating the Lorentz contraction increasing as the z component approaches the speed of light. Taking the perpendicular axis as the lab frame, the spacing between the arbitary measurements is equal when viewed from within the specific frame, but unequal as shown by the dots viewed from the lab frame.