Difference between revisions of "Tamar Electron and Pion Efficiency"

The requirements of the measured particles attributes that are used to differentiate electrons from negative pions is described below. Separating a negatively charged pion from an electron becomes more difficult when a negative pion has sufficient energy to generate cerenkov radiation and as a result may be misidentified as an electron. This contamination of the electron sample is reduced using cuts on the energy deposited in the electromagnetic calorimeter and the number of photoelectrons in the Cherenkov counter.

Figure 1.1. The energy deposition into the total and inner calorimeter before and after cuts.

In addition to the cut on the energy deposited into the electromagnetic calorimeter, misidentified electrons are reduced by requiring a signal in the threshold CLAS Cherenkov detector. Pion's misidentified as electrons have been shown to produce around ~1.5 photoelectons (PEs) in the Cherenkov detector, as shown below. Geometrical cuts on the location of the particle at the entrance to the Cerenkov detector were applied to reduce the pion contamination. The second histogram below shows that, after these cuts, the peak around 1.5 PEs is substantially reduced.

Figure 1.2. The number of photoelectrons before and after cuts.

A comparison was made with the results from experiment E99-107 <ref name="Park2008" >Park, K., Burkert, V. D., & Kim, W. (The CLAS Collaboration) Phys. Rev., C77, 015208.</ref> as one benchmark to evaluate the integrity of this semi-inclusive analysis. Experiment E99-107 measured exclusive pion production ([math]\vec{e} p[/math]->[math]en\pi^+[/math]) using a liquid hydrogen target and the CLAS. The EG1 experiment performed similar measurements using a polarized NH3 target allowing for an asymmetry measurement in addition to the differential cross-section in the nucleon resonance region for [math]1.7 \lt Q^2 \lt 4.5[/math] [math](GeV)^2[/math]. In the EG1 experiment polarized target and a 5.7 GeV continuous electron beam resulted in a luminosity of [math] 1.09209 \times 10^{33} \frac{[ \# of electrons]}{second \times cm^2}[/math].

The five-fold differential cross section can be written in the following way for a single pion electroproduction:

where [math]L_{int}[/math] - the integrated luminosity, [math]A_{cc}[/math] is the acceptance factor, [math]\epsilon_{CC} [/math] represents the efficiency of the cherenkov detector and the Jacobian term can be expressed in terms of the initial and final energy of lepton:

The EG1b data for kinematics chosen above show the same shape as E99-107 data.

The goal of this thesis is to measure the semi-inclusive asymmetry when an electron and a pion are detected in the final state. Pions of opposite charge will be observed using the same scintillator by flipping the CLAS Torus magnetic field direction. Although the pions will be detected by the same detector elements, the electrons will intersect different detector elements. As a result, the electron efficiency will need to be evaluated in terms of the electron rate observed in two different scintillator paddles detecting the same electron kinematics. Pairs of scintillator paddles with the highest semi-inclusive rate.

The electron efficiency of individual scintillator detectors using the 4.2 GeV data for ND3 and NH3 targets is investigated below. Only the electron is detection in the final state (inclusive case). The pion contamination in the electron sample was removed by the applying cuts described above. The electron paddle number 10 (B<0) and 5 (B>0) were chosen respectively because they contained the most electron events in a first pass semi-inclusive pion analysis of the data set. The electron kinematics(Momentum, scattering angle and invariant mass) for these scintillators is shown on Fig. 3.1.

Figure 3.1. Electron Kinematics(The histograms presented above are not normalized by faraday cup. We just want to show the kinematic range for chosen electron events).

Ratios of the inclusive electron rate, normalized using the FC, of scintillator paddles 5 and 10 were measured. The two ratios are designed to measure the CLAS detectors ability to observed the same electron kinematics using different detector elements positioned for opposite Torus polarities.

Notice the ratio is statistically the same if the NH3 and ND3 targets are used for this ratio in a manner which will be similar to the semi-inclusive analysis.

The measured single pion electroproduction rate was compared to the MAID 2007 unitary model that has been developed using the world data of pion photo and electro-production to determine the impact of using the above "correction coefficient". The model is well adopted for predictions of the observables for pion production, like five fold cross section, total cross secton and etc.

The MAID 2007 model has predictions of the total cross section for the following two cases, that are related to our work:

The ratio of the pions detected in the scintillator paddles, located between the Cherenkov counter and electromagnetic calorimeter, is shown on Fig. 3.2. The ratios were taken for four different cases. Assuming that, for the inbending case positive pions and for the outbending case negative pions have the same trajectories(the same kinematics) and vice versa((the inbending,negative pion) and (the outbending, positive pions)).

Using MAID 2007 total cross section was calculated for the following invariant mass and four momentum transferred square: [math]1.7\lt W\lt 1.8[/math] and [math]Q^2=1.1 GeV^2[/math]. <ref name="MAID2007" > http://wwwkph.kph.uni-mainz.de/MAID//maid2007/maid2007.html</ref>. After applying correction coefficients from inclusive cases, the ratios have been compared to the results from MAID2007.

After applying correction coefficients from inclusive cases, the ratios have been compared to the results from MAID2007. 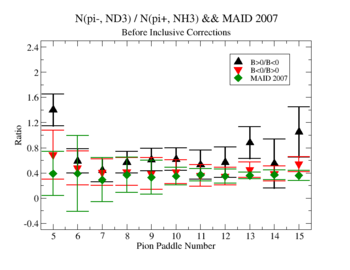 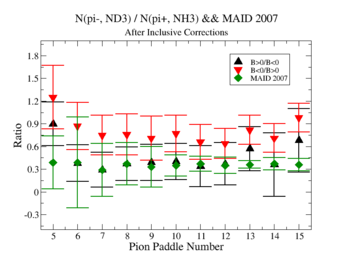 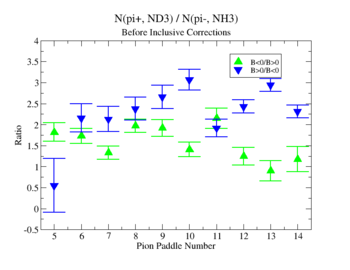 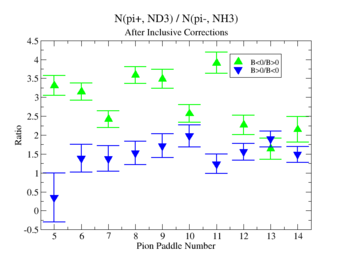 Figure 3.3. Pion paddle number vs Ratio before and after correction.