There are 5 states of matter: Solid, liquid, gas, plasma (ionized gas) , and a Bose-Einstein condensate (quantum effects on a macroscopic scale).

Semiconductor physics focuses on the solid state of matter in the form of crystals.

Some popular cell names are

The above images are suppose to represent the distribution of electrons in the crystal lattice cell.

A single free atom will have electrons bound to the atom due to the coulomb force. The bound electrons are found in various energy levels. 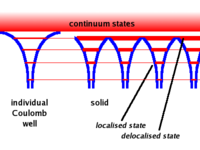 Notice
When you add the atoms to form the lattice, the potential barrier is lowered. This allows the electrons in the higher (more valence) states to become shared among adjacent atoms.( Delocalized)
Another effect is that the energy bands become wider. As the electrons in the higher energy states are shared between atoms forming a bond, the time any one electron spends bound to any one atom becomes smaller. SInce[math] \Delta E \Delta t \approx \hbar[/math] one finds that [math]\Delta E[/math] gets bigger for the higher state electrons (less bound) since their time \Delta t in a given bound state becomes less. The electron energy states become band like structures which get wider as you move to higher energy (less bound) electron states.

There are 14 different Bravais lattice configurations

Most Semiconductors are made from Silicon and GaAs.

Silicon is an insulator if in pure form with 4 weakly bound (valence) electrons.

As seen above, the properties of a semi-conductor will be determined by the electron configuration in the crystal lattice. In particular, the distribution of electrons in the conduction band of the lattice since those are the electrons which can move in the crystal in response to an applied electric field (voltage) as produce observable effect.

The Pauli exclusion principle states that no two electrons may occupy the same quantum state. This principle is seen by the quantum energy levels of electrons bound to atoms.

An important consequence of this principle is that, an crystal composed of atoms will filled energy bands is an insulator. You can only conduct electrons if there is an energy state available for the electron to populate. An electric field is established by applying a potential difference which pushes an electron up to a partially filled available energy state that is shared between the atoms in the lattice, thereby allowing the electron to "travel" to adjacent atoms.

The energy levels in a crystal lattice may be grouped into a conduction band and a valence band that are separated by a forbidden energy region called the band gap.

[math]F[E] \equiv[/math] the probability that a given energy level [math]E[/math] is occupied by an electron.

using Statistical Thermodynamic one can calculate the above Fermi function as 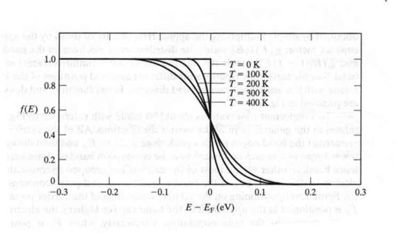 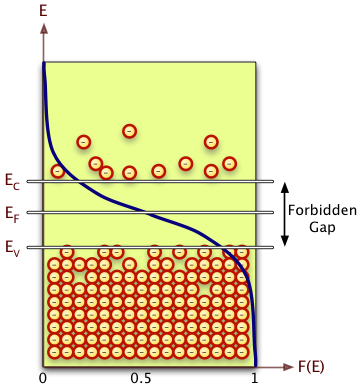 How much current can this be?

A detectable current but not high enough for practical applications

Note: The material still has a net charge of zero. The semi-conductor has excess FREE electrons on the n-side and excess HOLES on the p-side of the junction. When a junction is made excess electrons move over to the p-side and any positive "holes" move to the n-side. Notice this looks like a charged up capacitor with a voltage difference to be in order for charge to move/conduct.

The "depletion" region is located at the junction and is a place which has been "depleted" of mobile charge carriers. The ionized acceptor and donor impurity atoms are fixed in the crystal lattice at the junction. 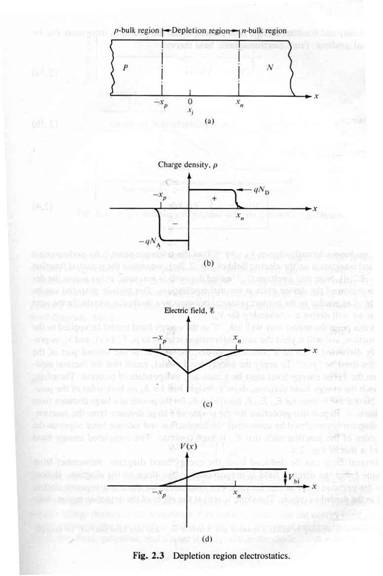 If you try and push current in the opposite direction you have an even higher barrier (step potential) to overcome than in the forward direction. There are only "holes" on the p-type side of the junction so electrons need to be "freed" by breaking covalent bonds on the p-type material side thereby creating 2 new charge carriers, one for the hole and one free to move to the n-type side. The bond breaking potential is higher than the potential needed to overcome the difference in Fermi energies. 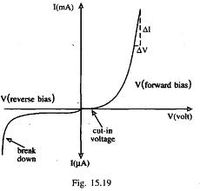 Do you remember the reason AC is used to distribute electricity?

Most power is generator via a mechanical means where a loop of wire (coil) is rotated in a magnetic field.
Less power is lost through a traveling AC current than a DC current. [math]P=I^2R[/math] , [math]R[/math] is a constant property of the transmission line

Laptops and other electronic devices usually use DC.

How does the AC-to-DC adapter work?

A half wave rectifier is a circuit which passes only half of the input AC waveform.

This is accomplished by using the diode's forward drop voltage to "clip" the AC signal. 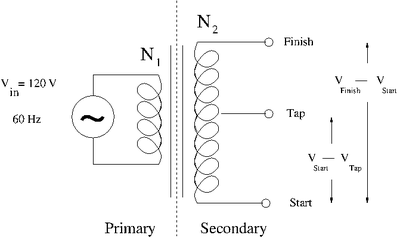 A transformer uses inductors/coils to step voltages either up or down based on the ratio of the number of coil turns[math]N_1[/math] and [math]N_2[/math].

Let [math]\Phi[/math] represent the magnetic flux seen by the inductors due to the changing current in the primary.

The ground is relative for a transfer. You could use the "Tap" or center post as a ground and either the Start or Finish end

Since both coils see the same flux

The negative voltage is clipped as long as the input voltage does not exceed the reverse breakdown voltage.

Diodes have rating for both the break down voltage and the max current that can be passed in the forward direction.

This circuit adds an RC low-pass filter so the voltage will slowly drop, according to the RC time constant, while the AC current is on its opposite swing.

The ripple's voltage drop is determined by the capacitor selected.

For a given current, select the voltage change you want for the ripple (\Delta V} and use the time between the peaks of the output (\Delta t) to detemine the Capacitor you need for the desired ripple.

Caution
Be sure the Resistors can support the power! 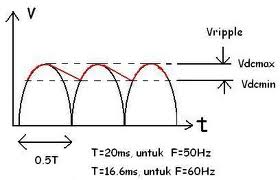 The Full wave is more efficient than the half wave because it does not block half of the current but inverts it.

The desired ripple is again given by

But this time time \Delta t is half as long (1/120 sec) because you didn;t through away half of the current 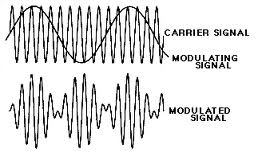