Thus far we have discussed direct current circuits which were built from a battery (constant voltage supply).

peak-to-peak
The amount the current changes from its largest positive value to its most negative.

Note
The above definitions can be used for voltage as easily as current.

Note
A 180 degree ([math]\pi[/math] radian) phase shift will put the above cosine wave completely out of sync with the original one such that if we add the two signals together the net current would be zero.

With this functional form for the alternating current we can now calculate another property, the RMS or root mean square. 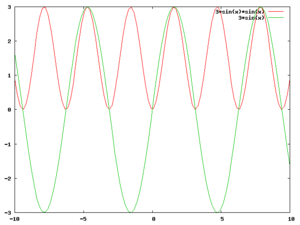 Another mathematical expression for an alternating current uses complex variables

Expressing the current in this form will be useful later

A mathematical form is for an AC voltage source is:

A capacitor is a device used to store charge in a circuit. The simplest capacitor is built from two conducting plates placed close to each other.

Notice
The potential is constant over the face of the capacitor

The symbol for a capacitor in a circuit is usually.

Capacitors in Parallel and Series

Capacitors in Series add like resistors in Parallel.(Capacitance decreases when hooked up in series)

Note
The same amount of charge is pushed onto each capacitor

For capacitors in series you can apply the loop theorem for the above case and the one where all the capacitors are replaced by a single capacitor.

then applying loop theorem lead to

Notice that the current is 90 degrees out of phase with the driving voltage. 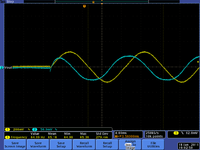 Note
The current increases faster than the voltage. Below are a few scope pictures measuring the voltage coming out of the voltage source [math](V_{in})[/math] and the voltage on the ground side of the capacitor [math](V_{out})[/math] (the capacitor is grounded through the scope). This is actually a high pass filter because of the internal resistance of the scope used to measure [math]V_{out}[/math].

To illustrate the resistive nature of capacitors, let's write the driving voltage in using complex notation

The current is written as

Capacitors block Alternating Currents so you can reduce ripples on DC voltages. 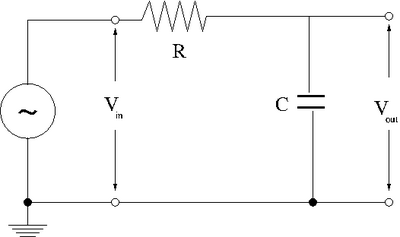 It looks like the voltage divider from the resistance section 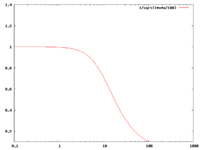 Note
The RC circuit is another way to measure the capacitance by measureing [math]V_{out}/V_{in}[/math] -vs- [math]\omega[/math] and do a linear extrapolation to determine the break point frequency.

Phasor diagrams are a technique used to illustrate the phase difference between the input and output alternating voltages/currents.

Returning to the loop theorem for the low pass RC filter

We can write the voltage as a complex variable using a coordinate system in which the "x-axis" represents real numbers and the "y-axis" represents the complex components. This is analogous to expressing 2-D vectors.

Below is a figure representing the complex plane. 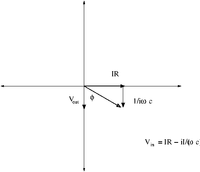 A high pass filter switches the order of the resistor and the capacitor. 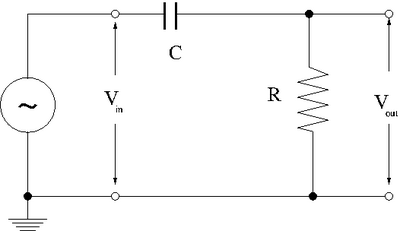 Using the same reactance based analysis as above

Returning to the loop theorem for the low pass RC filter

We can write the voltage as a complex variable using a coordinate system in which the "x-axis" represents real numbers and the "y-axis" represents the complex components. This is analogous to expressing 2-D vectors.

Below is a figure representing the complex plane. 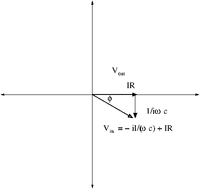 The above is integratable

This gives you the general solution for the homogeneous problem

In this case it represents the solution for a discharging capacitor.

A common and more general technique to solving such a differential equation is to use the solution from the discharging equation (the homogeneous diff. eq.) as a trial solution to the charging (non-homogeneous) problem by constructing the linear combination below.

Where A & B are constants to e determined

You then substitute this trial solution into the differential equation and apply boundary conditions to determine the coefficients.

An inductor is basically a loop of wire wrapped around a core (or air) to form a coil. 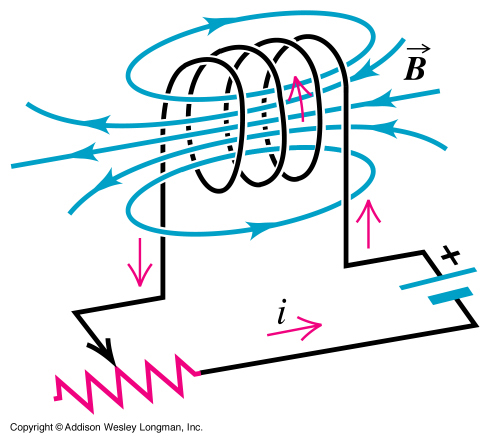 Consider what happens in the above circuit when you first connect a voltage source (or close the switch).

1.) A current starts to flow through the wire such that I=V/R (R can be the internal resistance of the battery which changes with time).

2.) A current produces a magnetic field

then you may need to use

Most inductors take the geometrical form of a solenoid. 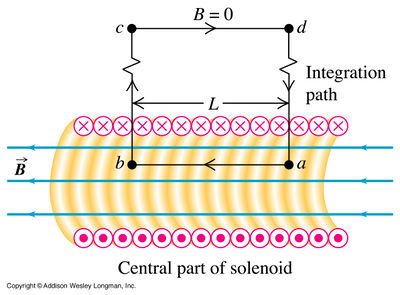 3.) When using an AC source the current is changing with time and as a result the B-field is also changing in time

The B-field is usually perpendicular to the area of the induction and mostly uniform.

The above is the emf induced in a single loop

If you assume there are N loop in the inductor
Then

Lenz's law says that the induced current will appear in a direction that opposes the change producing it.

So in essence the inductor acts "like" a resistor which resists the current flow according to the amount of current is changing.

Consider an AC voltage source with an inductor attached. 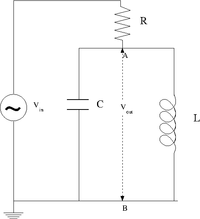 The above circuit has a resistor in series with an inductor and capacitor in parallel.

Using the complex analysis techniques for AC circuits you can consider the Inductor and Capacitor as impedances in parallel.

The current through the inductor side of the circuit is 180 degrees out of phase with the capacitor side.

Looking at the Voltage divider aspect of the circuit

In the above circuit

The inductors reactance at this resonance frequency is

Bandwith
The most common definition for the Bandwidth of this circuit is the frequency range over which the output decreases by 3 dB.

A 3dB drop corresponds to the frequency at which the circuits power is cut in half from the resonance frequency.

The Band Width is a measurement of the two frequencies which will decrease the resonance voltage by 30 %.

Notice
The Bandwidth can be changed in the above circuit by changing the step down resistor (R) without changing the resonance frequency.

The Quality factor of a circuit is defined in terms of a ratio between the energy stored to the energy lost.

How much energy does an inductor store?

How much energy does an inductor lose?

An Inductor in series with a capacitor is known as a Band Pass filter. Since wires are used to hook everything up and real capacitors have leakage resistance so an RLC circuit is a realistic version of the series LC circuit.

An RLC circuit is a Resistor, an Inductors, and a Capacitor in series with an electromotive force. 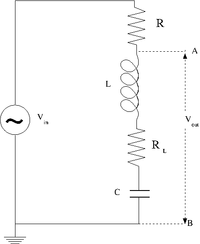 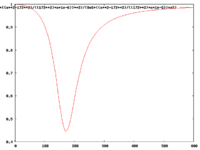 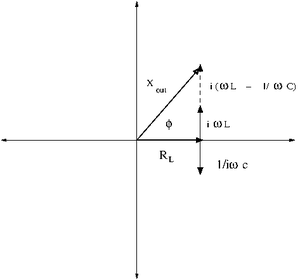