Neutrons are generated uniformly within a cylindrical target with an energy sampled from a Watt fission spectrum. The angle between the direction that the neutron is traveling at birth and upon exiting the target volume is calculated. The picture below illustrates this angle. The arrows are neutron trajectories, and the dots at the beginning of the trajectories represent the location where the neutron was generated. Neutrons that exit the target on a trajectory which will not intersect with a detector are not counted, e.g. neutrons going towards the ceiling or the ground. 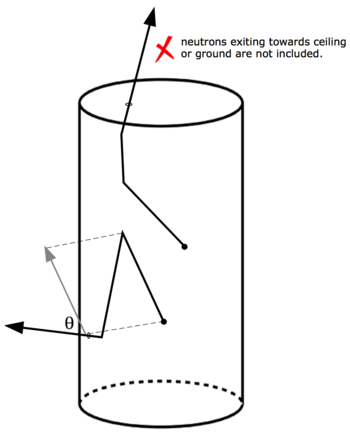 Below and left is a plot of the total cross section of Th-232. To the right is the simulated percent contamination for a target radius of 3.1 mm. At this radius, an MCNP F4 tally gave an average neutron track length (within the target) of 3.7 mm. The simulated percent contamination matches very closely with the probability of interaction calculated from the total cross section and average track length. All simulated neutrons are included in this plot, i.e. neutrons are not thrown away if they are traveling towards the ground or ceiling.