This report investigates the impact of target thickness and the use of an external solenoid for the production of positrons using a 10 MeV electron beam. An electron beam energy of 10 MeV is chosen as a compromise between maximizing the production of bremstrahlung photons and minimizing the production of neutrons that occur when an MeV energy electron beam interects with a dense metal. A converter target of liquid Lead-Bismuth Eutectic (LBE) is chosen with a concentration of 44.5% lead and 55.5% bismuth in order to provide a high atomic number (Z) material to increase bremstrahlung production that will also absorb the heat deposited when the material is traversed by an MeV electron beam. This work used the simulation package GEANT4 to predict the impact of target thickness and the use of a solenoidal magnetic field on positron production efficiency as well as the amount of energy that will be deposited by scattered electrons in the apparatus when using a 3.48 cm diameter beam pipe.

The momentum distribution of positrons escaping the downstream side of the LBE target is shown below along the momentum distribution of electrons that traverse the LBE target. Postrons leaving the downstream side of the target are predicted to have a mean momentum of 2.4 MeV whereas the electrons that penetrate the LBE target will have lost approximately 3 MeV. Most of the positrons have a momentum beetween one and three MeV. A system to transport these electrons would need to cover this momentum range to avoid appreciable loss. A solenoidal magnetic field was chosen that surround the LBD target. 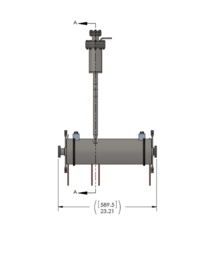