Today we installed the drift chambers and had our first beam on target. 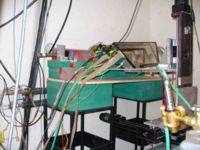 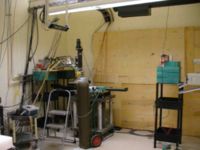 The left figure above shows a close up view of the first Aluminum course collimator, followed by a wide (blue) scintillator, then an Aluminum brick with a 3 mm diameter hole, followed by the Drift chamber known as Plastica, then Metallica. Both detectors are sitting on a translation table capable of moving both horizontally and vertically. The right figure shows a wider view of the apparatus. Another scintillator paddle was placed downstream of the drift chambers. An efficiency measurement is facilitated using a coincidence formed between the first two scintillators which sandwhich the drift chambers. An alignment laser is visible at the most downstream location visible in the photo.

We had an Aluminum brick with three different diameter (1, 3, and 6 mm) holes.

We put an aluminum brick in front of the electron beam in order to look at photons hitting the Drift Chamber. We saw a signal out of the drift chamber once for every 10 gun pulses.

A laser was mounted on the most downstream wall of the experimental cell and used to align the drift chambers with the beam. The laser was centered on the beam line located in the experimental hall and then the aluminum brick collimators were added in order to optimize laser transmission upstream to the beam pip blank off. The image shown in the figure below shows how the drift chambers were moved until the three sense wires ( #3,#4, and #5) reflected the laser light. 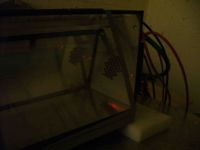