The linear output of the 3 Fold coincidence module is generated whenever there is an RF pulse from the accelerator and is sent to the 2-channel dual timer. The top channel of the dual timer receives the 3-FOld coincidence linear output and its delayed output is send to the bottom channel of the Dual timer. The bottom of the Dual timer will be used to set the gate width. So use the top channel to adjust the gate such that it is in time with the FC output pulse. Then adjust the bottom channel so the with of the gate integrate over the desired part of the FC output. 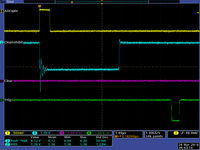 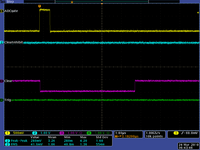 Set the DAQ electronics so the ADC is cleared via the FAST CLEAR input unless there is a coincidence trigger. Set the timing for the ADC gate so it integrates over the FC pulse.

The FC was readout using CODA and the CAEN ADC 792. There were 3 hot channels represent 3 out of the 16 2" bricks stacked up at the end of the accelerator.

1.) Set the TDC to clear unless there is a coincidence.

The FAST CLEAR on the CAEN 775 TDC did not work like the Fast CLEAR on the CAEN 792. Instead we decided to reset the TDC unless a coincidence pulse is generated which will veto the ADC FAST clear and the TDC reset pulses so they don't happen.

The VFAT cables delay the GEM trigout pulse by about 229 ns:

The VFATs have a latency switch which goes back in time by MCLK cycles.

229ns/25ns = 9.2 = latency value for VFAT to time in signal from the HRRL cell to the HRRL counting room

We should be able to get the VFAT measurement in time by setting the latency to 9 clock pulses.

First though, set the latency to 0 and set the VFAT threshold so you don;t see any hits.

Then, study how the hits in the VFAT change with latency by changing the latency between values of 8-16.

end the day with everything in time

Work on collimation to optimize detector coincidence and rate. We want a coincidence in all 5 detectors with no pileup.

This means collimation and reduced current.

Once set up we should just take data all day to practice tracking.

All coincidence with RF pulse

First take a data sample with coincidence on front and rear PMTs (2 hours).

and then finally see if the GEM trigout can be added and finish running with this configuration.

No VFAT Runs With triple coincidence, were settings thresholds and other parameters on VFATs.

The data below have the fron and rear PMTs in coincidence with the accelerator RF as well as the rear Drift chamber and the Qweak GEm detector trigout pulse.

Latency for all cards 0x12
MSPolarity = On 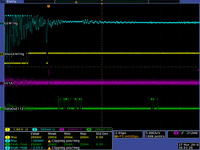 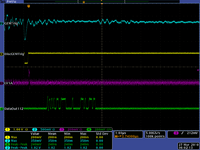 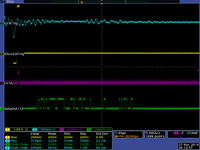 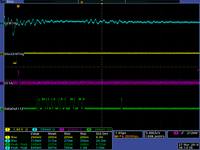 Below is shown the scope picture of the TDC start and stop, as a stop i have Qweak GEM discriminated trigout pulse: 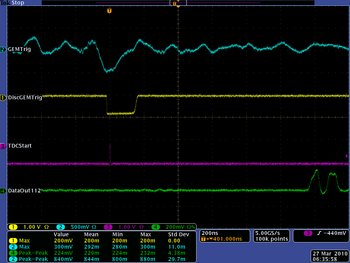 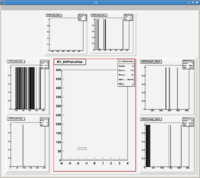 This data has the front and rear PMTs in coincidence with the accelerator RF.

as well as the rear Drift chamber and the Qweak GEm detector trigout pulse. 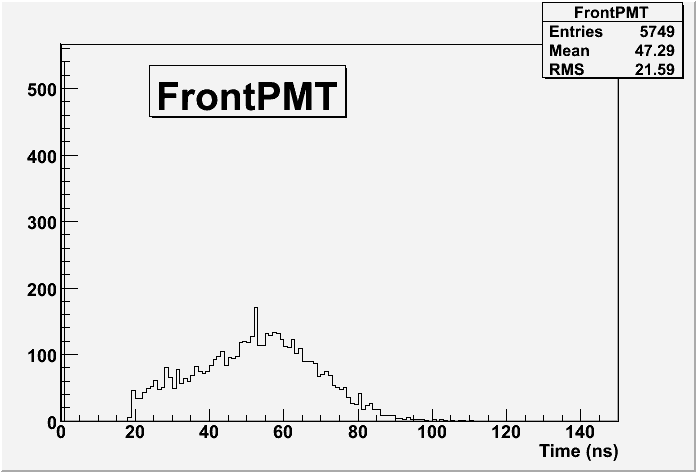 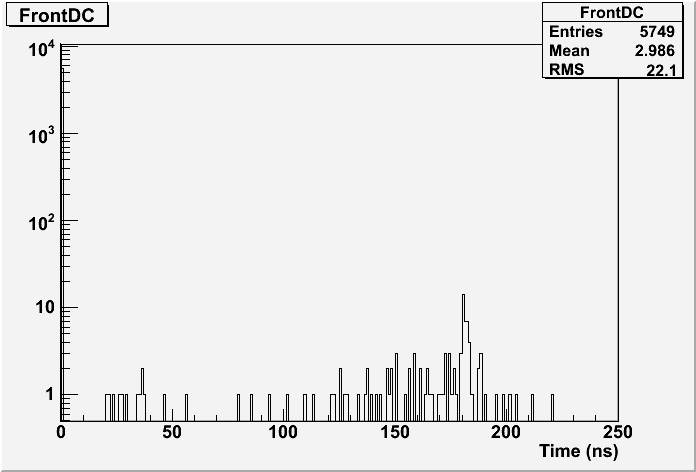 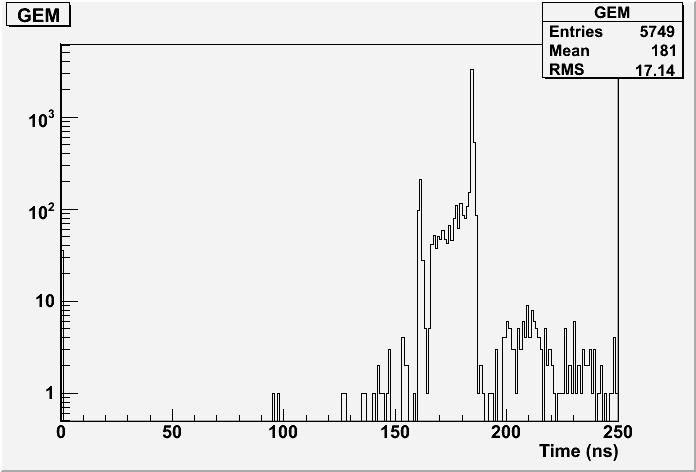 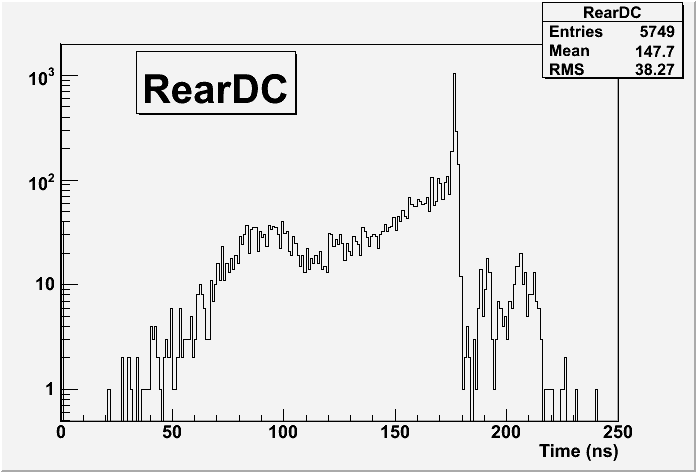 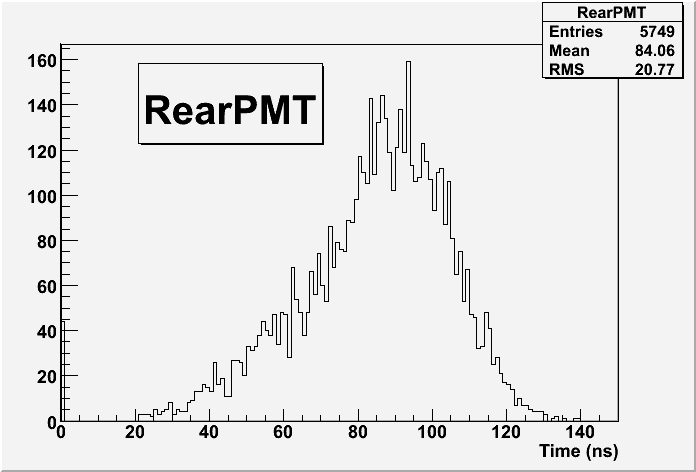 The time difference between detectors upstream and downstream should be positive. 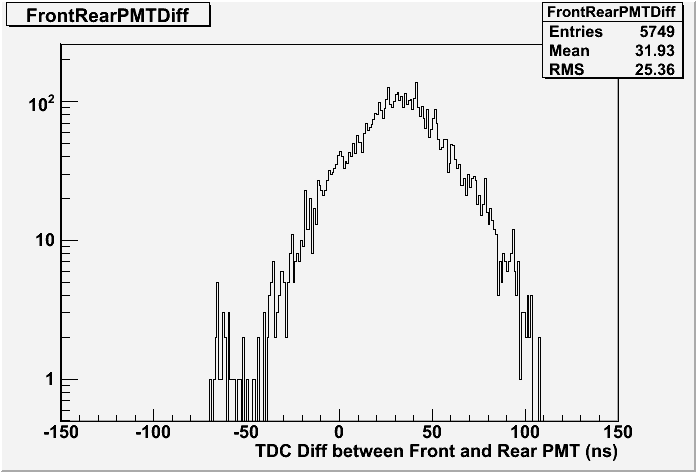 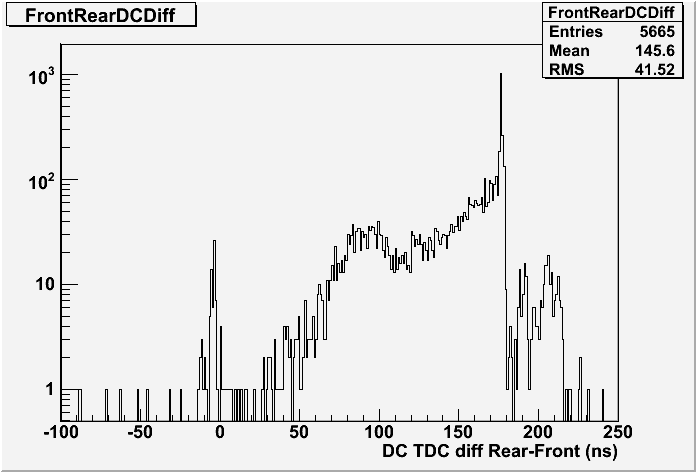 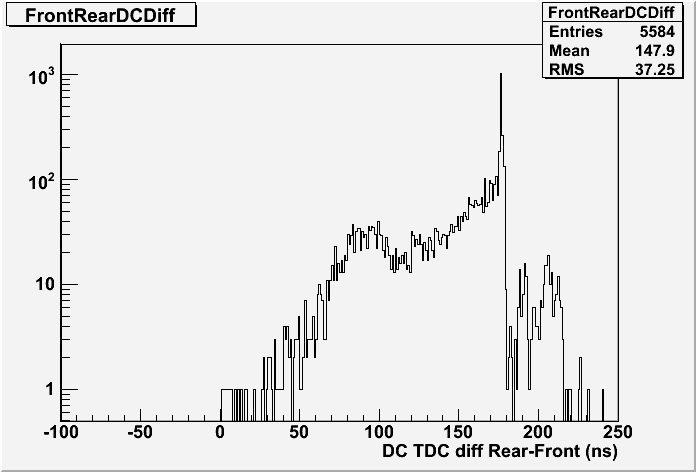 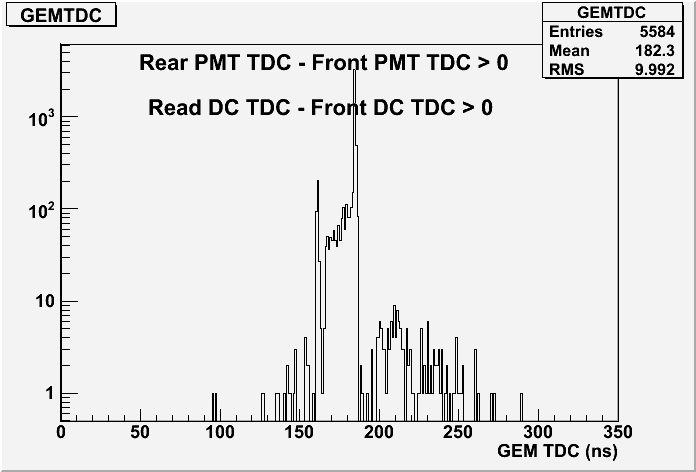 The front scintillator must not have been in the trigger for Run 1513?