Consider the motion of a ball thrown straight up as viewed from [math]\mathcal S[/math].

At some instant in time the velocities add like 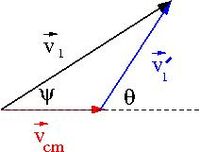 taking derivative with respect to time

in your noninertial frame, the ball appears to have a force causing it to accelerate in the [math]\vec A[/math] direction.

an example is the "fictional" centrifugal force for rotational acceleration.

Pedulum in an accelerating car

Consider a pendulum mounted inside a car that is accelerating to the right with a constant acceleration [math]\vec A[/math].

What is the pendulums equilibrium angle [math]\theta_0[/math]

If the pendulum is at rest and not oscillating then

The pendulum oscillation frequency as seen in the accelerating car is

The tides view by a ref frame accelerating towards the moon

The gravitational force between the moon and the earth accelerates the earth towards the moon.

This makes the earth an accelerated reference frame

where [math]d_0[/math] is the earth-moon distance of separation.

As seen in the Earth non-inertial reference frame

Let's consider two cases, one where M_o is directly between the moon and the earth and the other when the mass is directly on the opposite side of the earth from the moon.

Magnitude of the Tides

Consider a drop of water of mass [math]m[/math] on the surface of the ocean.

The three forces influencing this drop from the previous sections are

Archimedes Principle
An object in a fluid is buoyed up with a force equal to the weight of the water displaced by the object.

All of the above forces act normal to the surface of the water.

are the result of a gravitational force which is conservative.

are forces that are exerted such that the are always perpendicular to the surface of the ocean ( they are normal to the surface) then the sum of the two potential's, [math]U_{eg} + U_{\mbox{tide}}[/math], is constant on the surface

Height of Tides due to Moon and Sun

spring tides
The case when the moon, earth and sun are aligned to give maximum height tide (moon can be either full or new doesn't matter because the bulge is on both sides of the earth)

neap tides
This is the case then the sun, earth, and sun are aligned to form a right triangle. The tide effect should cancel so the height is only 54-25=29 cm.

Any displacement of a rigid body in three dimensional space such that a point on the rigid body, say O, remains fixed, is equivalent to a rotation about a fixed axis through the point O.

Euler's theorem on the axis of a three dimensional rotation

The matrix R above represents a spatial rotation that is a linear one-to-one mapping that transforms the coordinate vector P into p.

The above theorem can be proven by treating it as a matrix algebra problem where you want to prove. ie

A consequence of Euler's theorem is that a single rotation may be represented as a combination of rotation.

[math] \hat \omega \equiv[/math] direction of the rotation axis which is given by the right-hand rule and may is expressed using the components of a right handed coordinate system ( ie [math]\hat i,\hat j ,\hat k[/math] or [math]\hat r,\hat \theta,\hat \phi \cdots[/math])

Now consider the situation when an object is rotating. The relationship between angular and linear motion should still satisfy the general express

Both the linear and the angular velocities add

Rate of change of a general vector Q

Hamilton's principle is defined for an inertial reference frame, therefor the lgrangian is written from that perspective.

For the rotating earth

For objects with velocity v < 500 mph you can neglect the coriolis force.

Also note that the coriolis force depends on the velocity of the object while the centrifugal does not.

The direction of this fictional force on the earth's non-inertial reference frame is radially outward from the axis of rotation.

If we assume the objects velocity v < 500 mph then you can neglect the coriolis force.

The coriolis force decreases the pull of gravity and is a function of the lattitude ([math]\sin \theta[/math]) The larger [math]\theta[/math] the stronger the effective gravitational force.

Launch rockets from Florida not Alaska

The Earth rotates from west to east. 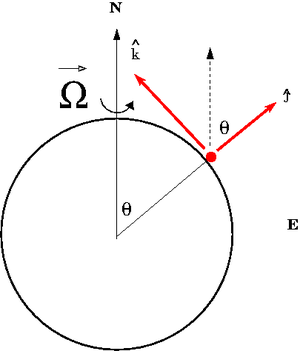 I you launch a projectile in the Northern Hemisphere so its velocity tangential to the Earth's surface and moving from the equator towards the north pole, the projectile will be deflected towards the east (right).

If you launch the projectile towards the equator from the Northern hemisphere.

In both cases the projectile is deflected to the right of its velocity direction.

What happens in the Southern Hemisphere? 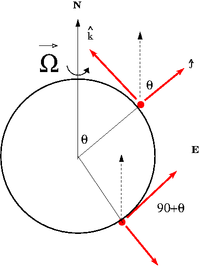 Weather systems involve a large mass of air moving at speeds up to 100 miles per hour in the case of a tropical storms.

Over large distances this acceleration can have an effect on the course of a storm but not the short distances involved in tornados.

Tropical storms (cyclones) are examples of how the coriolis force determine the rotational direction of an air mass that is quickly moving towards a low pressure area. As the air mass moves along the pressure gradient is is deflected to the right. This results in a clockwise (counter-clockwise) rotation in teh Northern (Southern) hemisphere. The radius of the cyclone can be estimated as

Consider an object of mass m close to the surface of the earth and falling in a vacuum.

writing out the individual components

[math]\Rightarrow \dot x =\dot x_0[/math] : integrate and the constant is the initial velocity of the projectile

similarly in the y-direction

Return to the original system of the equations of motion

If the object is dropped from a height h

The unit vectors ([math]\hat{r}[/math] and [math]\hat{\phi}[/math] ) are changing in time. You could express the position vector in terms of the cartesian unit vectors in order to avoid this

The dependence of position with [math]\phi[/math] can be seen if you look at how the position changes with time. 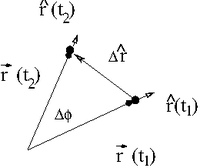 If the particle is not constrained to circular motion ( i.e.: [math]r[/math] can change with time) then the velocity vector in polar coordinates is

or in more compact form

Taking the derivative of velocity with time gives the acceleration

We need to find the derivative of the unit vector [math]\hat{\phi}[/math] with time. 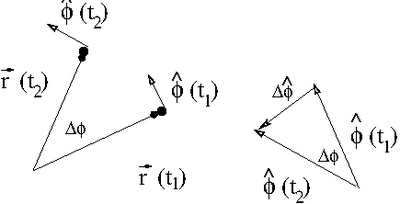 Using the same arguments used to calculate the rate of change in [math]\hat{r}[/math]:

Finding the derivative of [math]\hat{\phi}[/math] directly

Substuting the above into our calculation for acceleration: