What is a solar cell ? 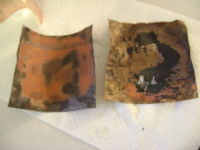 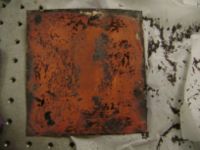 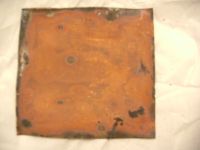 A 2 liter plastic container, an ammeter, wire leads, and water were used to measure the current produced by the cupric oxide solar cell. The plastic container was filled with 1.8 Liters of water. A copper sheet, which was not heated, was placed on one side of the container and the copper sheet with cupric oxide was placed on the opposite side. The positive lead of the ammeter was connected to the cupric oxide sheet and the ground of the ammeter was connected to the plain copper sheet. The current was measured by the ammeter under direct sunlight and sunlight blocked by a curtain. Several measurements were made using different amount of salt ranging from 0 to 10 teaspoons. 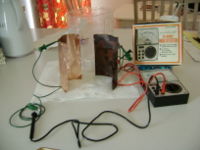 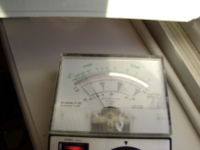 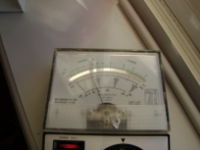 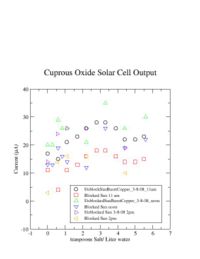 The graph below shows the average current measured from sunlight after subtracting out the current measured with the sunlight blocked. The subtraction of the blocked sunlight current resulted in a current measurement which was repeatable. The vertical lines on each point represent the fluctuation in the measured current. The points show a clear non-zero current is being made by the solar cell. Other people have seen values between 6 and 50 [math]\mu[/math]A (see http://scitoys.com/scitoys/scitoys/echem/echem2.html). It is also difficult to see any dependence on the amount of salt put into the water. 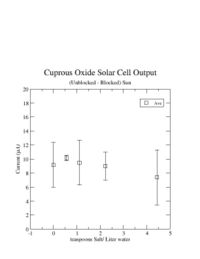 I also noticed during this experiment that the current would increase if I lifted the cuprous oxide sheet out of the water until only about 1 cm of it was still in the water. The graph below shows that the current increase by about 4 [math]\mu[/math]A if I moved the cuprous oxide sheet such that only 1 cm was in the water. I did not see the same thing happen if I moved the copper sheet out. 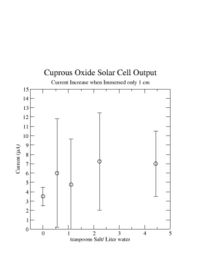