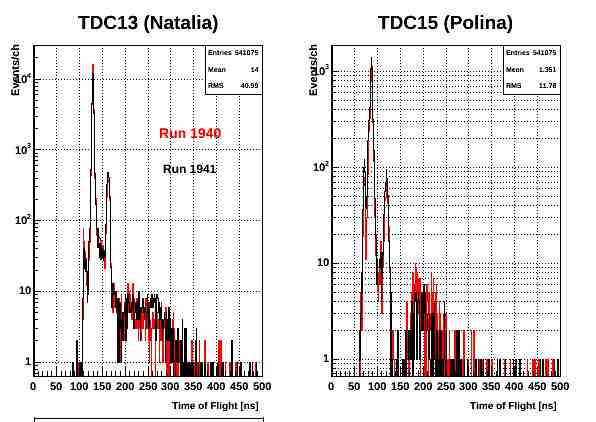 The point is to determine why we have all these peaks around the spot the gamma flash is supposed to be. First, I will do an analysis to see exactly where the gamma flash is. Then, we should be able to do some tracking down of what the other peaks are from by converting the TDC spectrum into a distance scale to see how far away the other peaks are, assuming they are from gammas.

The lead in front of the neutron detectors was removed. Run 1930 shows the results with no physics target, and 1931 has a D2O target.

The TDC spectra were then converted to a distance scale.

As can be seen, we have one peak on each of the gamma flash.

Not much of a difference is seen, just maybe a slight shift in peaks.

The next test I looked at is where the beam gate was open and closed. In run 1921 the gate valve is open, and 1922 gate valve closed.

As can be seen, there is nothing when the gate valve is closed. This concludes that all the structure comes from somewhere after the gate valve.

The next test I looked at is where the off-axis collimation hole was blocked on the accelerator hall side with 8 inches of lead. Run 1923 is with a no physics target.

As the spectrum shows, we are still getting a lot of particles in the experimental cell even know 8 inches of lead is blocking the off-axis hole.

The next set I looked at was radiator in/out. These two runs are with beam up, D2O physics target. Run 1945 is radiator in and 1946 radiator out.

Again, there is no difference in the structure of the gamma peak.

As the plots show, there is no difference.

Run 1822 has radiator in, no physics target.

Run 1815 is one of the runs that we used Ilyusha as a start to the TDC instead of triggering off of the beam. The radiator was in and a lead brick was used as a physics target.

As can be seen, the gamma peak structure remains regardless of what we trigger off.

In Run 1817 the voltage on Ilyusha was lowered, otherwise same conditions as 1815.