Two scintillators are placed on top and below the drift chamber

These scintillators have PMTs on both ends allow an initial position to be determined according to the time difference between the PMT hits.

Below is the calibration for Detector M and Detector G

M2 PMT is not making good contact with the light guide thus output pulses are below 300 mV, Pulses get bigger and more frequent if you push the PMT onto the scintilator.

G1 pulses were below expectations ( below 300 mV?) perhaps the PMT is not capturing the light.

Trigger Matching is ON resolution = 100 ps

On Ortec model 934 Constant Fraction is used on the scintillator PMTs. The output width is 20 ns.

The CFD output is sent to a CAEN N455 quad coincidence logic unit. The logic unit output is set to 30 ns as the CAEN TDC 1990A requires a minimum TDC stop NIM signal of 25 ns.

Scint on top of each other

Before placing the scintillators at the locations shown above (one scint on each side of the drift chamber) we placed them on top of each other to measure the time between pulses when a cosmic ray passes through each. The Logic module width was 20 ns.

Scintillators on both sides of DC

We ran cosmic over the weekend and stored the data in run 3811. 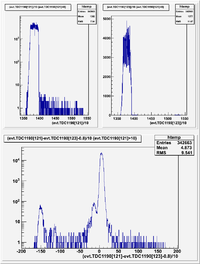 Rotated top scintillator so PMTs in use are on the same side of the chamber.

PMTs that are adjacent to each other have a coincidence timing distribution which has a single dominant peak with an RMS of about 1.5 ns. If the top paddle is rotated 180 degrees so the coincidence formed is from PMTs that are on opposite sides, then we get 2 peaks. Both setups have a satellite peaks at -18 ns which occurs 1000 times less often than the main peak. We are not quite sure what the source is of this satellite peak.