Difference between revisions of "AccApp07"

The detection of nuclear threats to homeland security is a high national priority. Ports of entry into the United States are one possible means by which such threats can enter or gain close proximity. In order to maintain commerce, a system to detect nuclear threats entering through these ports would rely on a radiological signature, or signatures, that can be evaluated within a relatively short time period. With approximately 11 million oceangoing cargo containers entering the United States in 2006 (9 million in 2005) 1, a system to inspect 100% of these containers passing through 300 ports of entry would required less than 14 minutes per container to transfer the cargo between transportation systems in order to maintain commerce. A research program using observables from photonuclear induced reactions to evaluate nuclear threats inside cargo containers is described below.

The Idaho Accelerator Center (IAC) at Idaho State University (ISU) has a research program designed to address the above threat by actively investigating cargo containers with high energy photons at their Inspection Technology Research & Development Laboratory (ITRDL) in Pocatello. The 20,000 sq. ft. facility contains a 12 MeV linear accelerator and a variable speed cargo container transport system. The accelerator is used to produce a flux of high energy photons capable of penetrating the cargo container and producing radiographic images of the container’s contents. The variable speed transport system moves the containers between the photon source and a system of detectors in order to scan about a 2 meter high section over the entire length of the container. The Linear Accelerator, photon detection system, and neutron detectors are described below.

A linear accelerator, designed by Casper Phillips Inc., built by Atlas Mechanical Inc and sponsored by PACECO Corporation, delivers a maximum electron beam energy of 12 MeV onto a 2.7 mm thick Tungsten target in order to produce high energy photons via bremsstrahlung. The 80 μA maximum electron current can be pulsed at 200 Hz. A 90 degree collimator after the Tungsten converter results in a divergent photon flux capable of imaging half of the cargo container height. The cargo container is passed through the photon flux at a distance of 10.5 feet from the converter and is be pulled through the imaging system at a speed of 60 cm/s thereby facilitating an imaging time of 20 seconds for a 40 foot long cargo container.

A system of Geiger Muller tubes is used to detect gamma rays that are attenuated by the cargo container. The tubes contain Neon gas at a pressure of 10 Atm to increase their detection efficiency. Each of the 15 detectors is 25.4 cm long with a 1.58 cm diameter. Photons which pass through the cylinder’s end window are detected while off axis particles are attenuated by a 0.38 cm thick iron pipe surrounding the sides of tubes. The detectors are operated in proportional mode to minimize the sensitivity to background.

A system of several neutron detectors is mounted on the top part of cargo scanner to detect neutrons exiting the top of the container. The neutron detectors were developed by the Idaho National Lab to differentiate between prompt and delayed neutrons2. The tubes contain 10 Atm of He3 and are encased in a poly moderator, a thin cadmium layer and a boron loaded outer shielding shell. The Helium tubes have a diameter of 2.54 cm and are 76 cm in length. The neutron detection efficiency as a function of energy is shown in Figure 1. 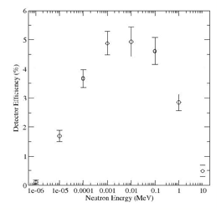 The Geiger Mueller tube response to a photon flux attenuated by both steel and concrete was measured. A step wedge of varying thickness of concrete and lead is placed inside a cargo container in order to evaluate the photon detection capabilities when the probe is attenuate. Figure 2 illustrates the detector signal output as a function of scan time for a steel wedge. The photon detection is effective up to a steel thicknesses less than 15 cm where photons are sufficiently attenuated to prevent detection thereby indicating the presence of thick shielding material. The impact of using an equilibrator, a 0.35 cm Aluminum low-energy photon shield, did not make an appreciable difference in the Detector response. 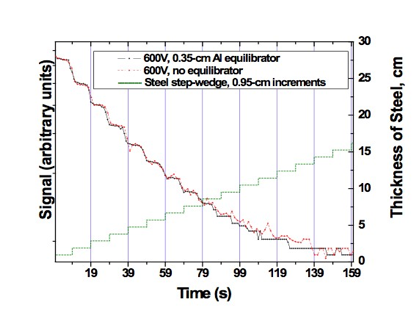 Figure 3 demonstrates that the signal response for concrete is effective up to at least 100 cm at which point 22 cm of Bismuth was added. Despite loosing sensitivity to thickness changes in 100 cm thick concrete, photon attenuation is still observable for comparably higher Z material like Bismuth. 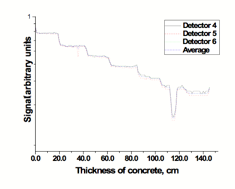 Fig. 3. The Geiger Muller tube signal when the photon probe is attenuated by a concrete wedge inside a cargo container. The concrete wedge has a 22 cm thick block of Bismuth located at the concrete thickness of 115 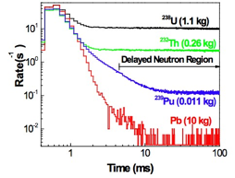 Fig. 4. The neutron time of flight measurements using a 20 MeV incident electron beam and several nuclear targets. A BC-408 scintillator was used for neutron detection.

The detection of delayed neutrons from nuclear threats inside cargo containers at the ITRDL facility was based a previous experiment performed at the Idaho Accelerator Center 3. The experiment measured higher delayed neutron fluxes in the presence of material capabable of posing a nuclear threat than more benign material. Electrons accelerated to 20 MeV impinged on a 4.2 g/cm2 thick tungsten target to produce the high energy photons used to probe three fissionable targets and lead. As shown in Figure 4, the rate of delayed neutrons is substantially higher when the neutrons are produced by fissionable material capable of posing a nuclear threat than for lead. Radiographs of an entire cargo container were taken to search for correlations between the location of nuclear threats hidden within a cargo container and the detection of excess delayed neutrons. The He3 neutron detectors clad with a neutron moderator were used to monitor the neutron flux perpendicular with the incident gamma probe. Figure 5 shows the radiograph taken of the cargo container along with an overlay of the neutron detector output. A radiological alarm threshold is constructed based on previous background measurements of the cargo container and the neutron detector output during a scan. The neutron counts exceed a typical radiological alarm threshold at the location of a 1.1 kg depleted uranium source. Based on this performance, it has been estimated that 11 g of Pu-239 could be detected within 5 minutes.

Fig. 5. Radiograph image of a cargo container using the current imaging system along with neutron detectors to measure a threshold nuclear threat alarm point. The threshold alarm is determined during the signal measurement using prior measurements of the cargo countainer background without the depleted uranium.

I.C. Future Enhancements Neutron detection efficiency and radiographic resolution are two features of the present cargo scanning system which we seek to improve using a recent development in gaseous detector technology know as the gas electron multiplier (GEM). A GEM is a copper clad kapton foil (flex circuit) perforated with an array a 50 micron diameter holes in a staggered array invented in 1997 by Fabio Sauli 4. The foil acts as a preamplifier when a voltage of up to 350 Volts is applied across the top and bottom layers. The primary ionization event is amplified due to an ionization cascade which occurs when charged particles encounter the strong electric fields near the hole. An applied voltage across the foil establishes the strong electric fields. The gaseous detector becomes sensitive to neutrons when the GEM foils are coated with Boron-10. Efficiencies of 50% for thermal neutrons have been observed 6 when multiple layers of borated GEM foils are used. The next step to improving the current cargo container scanning system will be through the deployment of GEM equipped ionization chambers. The first stage of developing these detectors will focus on constructing a more robust system using thick “PC board” size GEM boards instead of thin flex circuit foils. The performance of thick GEM (TGEM) PC boards is similar to the original flex circuit configuration 5 but is less expensive to mass produce. Impregnation of Boron-10 onto a TGEM is less of a technical challenge due to the larger holes and more rigid G10 material. Low production costs, robustness, and the less technically challenging Boron-10 impregnation are two advantages of using TGEM boards instead of flex circuits which we will capitalize on to produce a large cost effective detection system. II. CONCLUSIONS

An active investigation system using electron accelerators to induce photonuclear reactions provides information capable of identifying nuclear threats to homeland security. The photonuclear reactions investigated above show the level of sensitivity which can be achieved when the research preformed at the Idaho Accelerator Center is applied at the Inspection Technology Research & Development Laboratory. The next step to improve the resolution and detection efficiency of this system will involve the application of a recent gaseous detector technology known as the gas electron multiplier. While a cargo container system will most likely involve the detection of multiple nuclear threat signatures, this work suggests that signatures from photonuclear reactions can play a substantial role in the effort to thwart nuclear threats.

We would like to acknowledge the efforts of IAC and INL personnel in this work.