For our experiment we used two Canberra 2035A Constant Fraction Timing SCA which performed both energy and timing analysis on post amplified analog pulses. The amplitude of the analog signal is typically proportional to the energy a photon deposits in the detector. Low energy background events are reduced using the discriminator. Both CFD modules where set to accept 60 keV photons or greater. The output logic pulse from this constant fraction discriminator occurs at the same point in the rise of input pulse. To accomplish this, the analog pulse into the discriminator is superimposed onto a copy of that input that has been inverted, attenuated, and offset in time. Adding the two signals yields a bipolar signal. A timing discriminator triggers on the zero-crossing of the signal, producing an output logic pulse. After the CFD, one pulse, with a pulse width of 20 ns, went straight to the a time-to-digital converter (TDC start). A copy of that same pulse went to two gate generators that where used to increase the pulse widths to 100 ns. This increase in the width of the logic pulse corresponds to a 200 ns timing window for coincidence events. In other words, a coincidence is thought to exist if the two output signals occur within 200 seconds of each other. 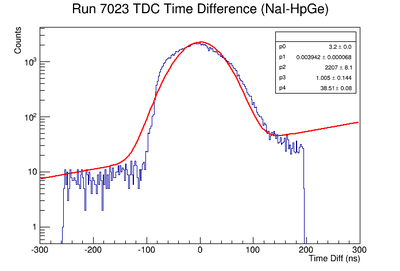 A false coincidence background can be suppressed further by requiring simultaneous signals from both detectors. The 20 ns wide logic pulses produced by the CFD are sent to a time-to-digital converter (TDC) and to a logic unit, after their width has been increase to 100 ns as shown in FigureXX.YY. The logic unit will compare the timing pulses in an AND gate that only provides output if the two pulses are within a 200 nanosecond window. The coincidence output is used to open a linear gate that signals the PADC to look for a peak within a 1 usec window. FigureXX.YY is a plot of the time difference between the two detector pulses thought to be in coincidence. It shows that the natural range of the signal is +/- 100 ns. We can find the probability of having an accidental peak in coincidence by taking the area of the TDC signal and finding the ratio to the accidental background. The probability of an accidental event was approximately 10.19% for a best case scenario and approximately 24.81% for a worst case scenario. 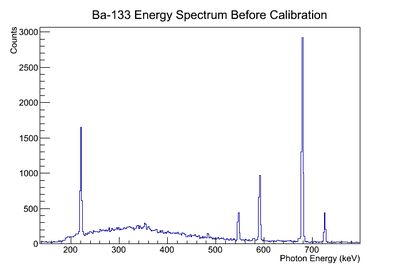 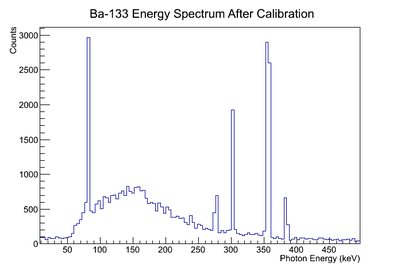