2n opening angle spectra obtained after the processing of all the runs with thick uranium target are shown below for the tow cases (a) with coordinate cuts implied by the calibration with independent Co-60 source and (b) without the cuts applied and self calibration used: 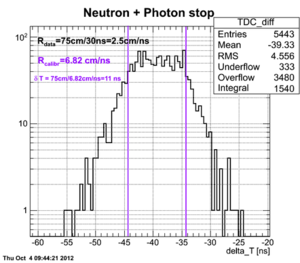 The bin width (x-error) is 7.2 degrees, the total number of bins is 25. Statistical error (y-error) is presented for each bin.

At this stage there is no efficiency normalization involved in the calculation. The main goal is to show that we've got 258 neutrons in all the runs.

A. Coordinate cuts were NOT applied.

A. Coordinate cuts were NOT applied. "Whole" region of the neutron hit coordinates was used. 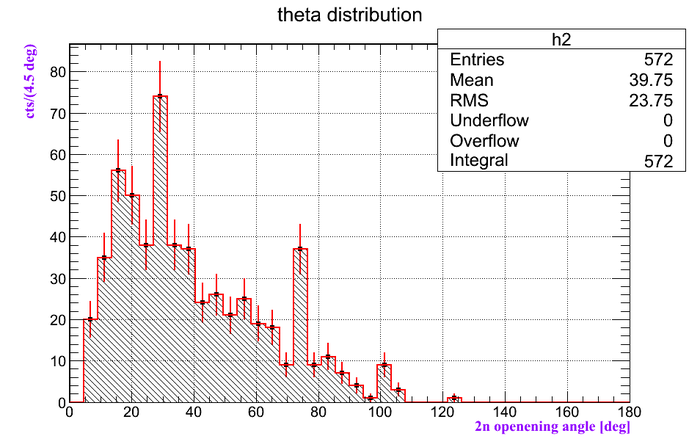 Below the spectra of the neutron detectors effective length is represented after using calibration obtained in a separate experiment with Co-60 source and NO coordinate cuts applied. The actual detector active area lenfth is 75 cm. 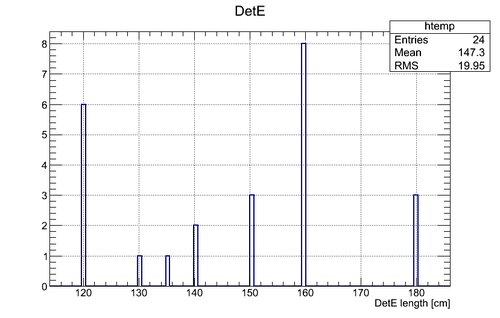 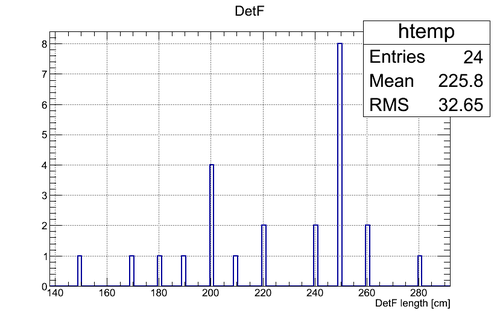 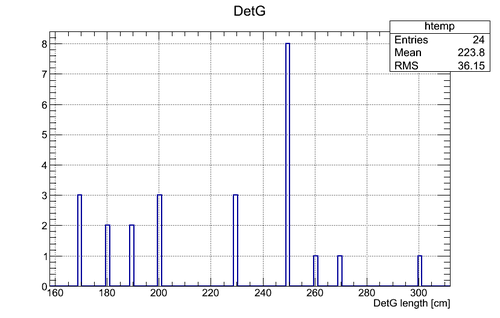 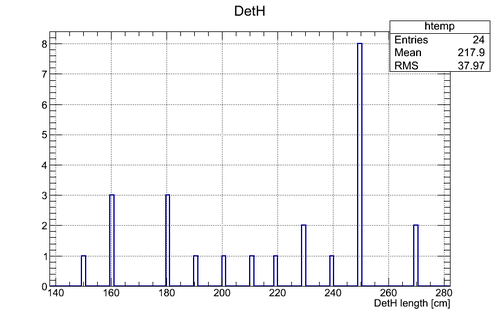 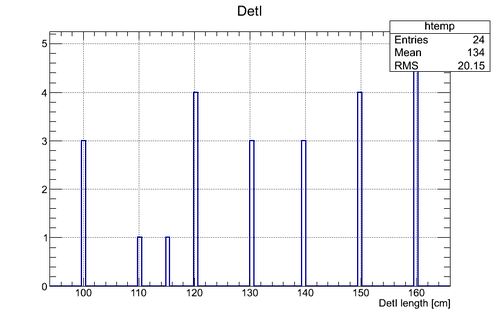 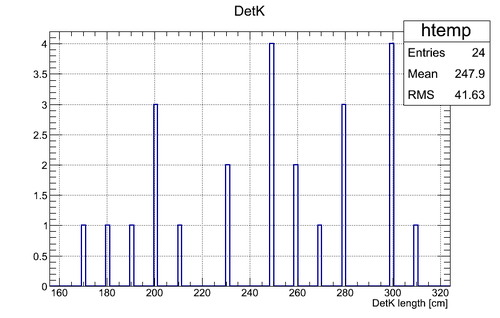 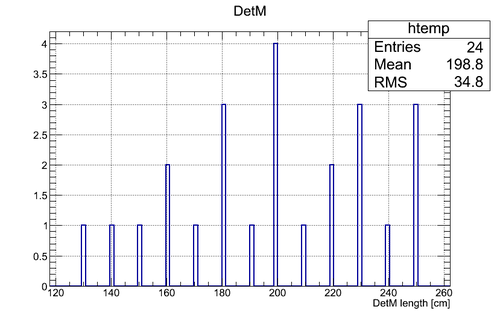 The total number of neutron pairs sampled was [math]25 \cdot 10^5[/math], emission of neutrons was in [math]4 \pi[/math] form isotropic point source. Geometry of the experiment was preserved.

The 2n opening angle for the case (1) is shown below: 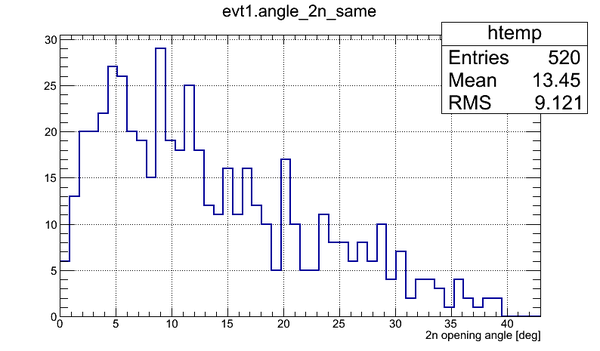 The 2n opening angle for the case (2) is shown below: 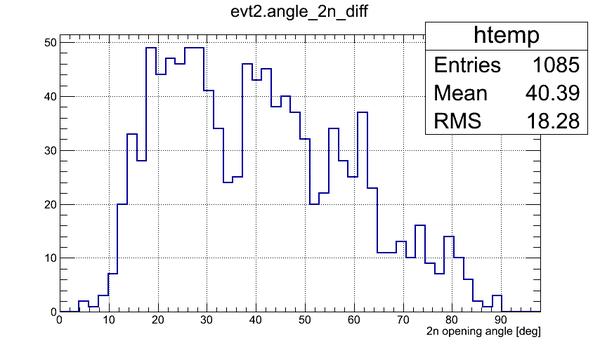 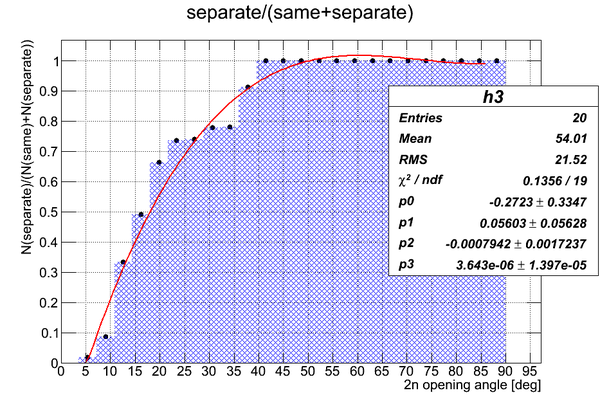 Correction of experimental data for the geometry

As it was shown above we could not detect multiple hits of the same detector. In order to obtain the influence of the geometry on the data we will consider 2n opening angle for neutrons hitting two different detectors.

Comparison of the data and 2n opening angle obtained via simulation is shown below. The histograms have same number of bins (25) and same bin width (7.2).

The plot on the right was normalized to the total number of neutron pairs sampled during the simulation. 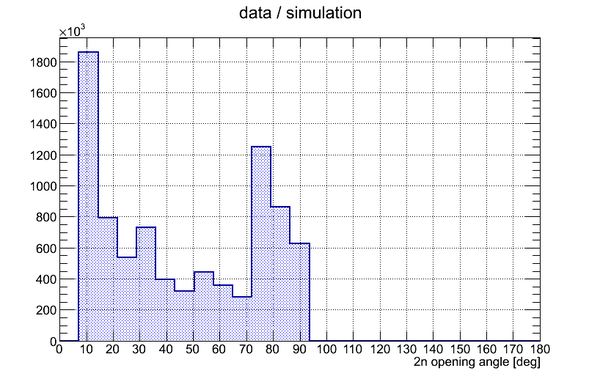 Statistics over the last three bins

The number of neutron pairs sampled was increased up to 4E+6. The simulated data (see figure below) have pretty much the same trend as it was presented above for 2.5E+6 sampled neutrons. 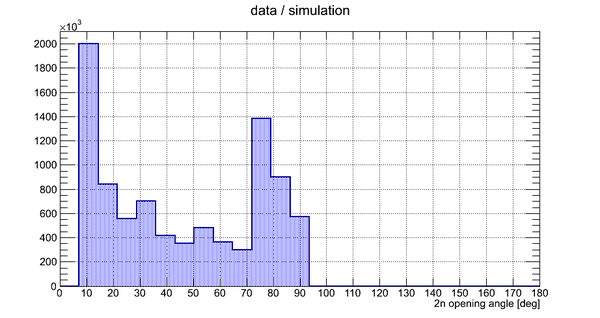 The last three bins were chosen to do statistical analysis. The data are shown below in the table.

As can be seen the last bin in the experimental data has only one count. So it is hard to do a certain conclusion about the precision of the measurement for the last bin. The errors are a bit smaller for the two following bins. It is possible to decrease the number of bins, however, the angular resolution will be decreased either. Currently the bin width is 7.2 degree.

After the number of bins was reduced the experimental data (left) and normalized simulation data (right) look like this:

The plot of the experimental data divided by the normalized simulation data is shown below: 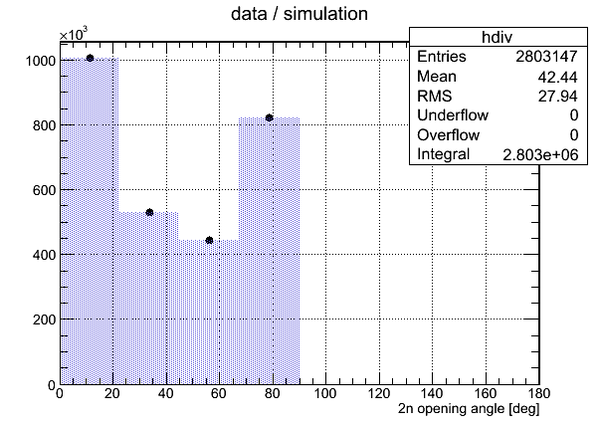 There is still increase of event number in the 2n opening angle spectrum in the bin# 4. Statistics on the 4th bin is presented below in the table.

The photofission lab frame is plotted below. Photon is coming along z-axis. Two fission fragments (heavy and light) created with the corresponding total momentum [math]\vec P_1[/math] and [math]\vec P_2[/math]. Each fission fragment emits one neutron each per fission event. 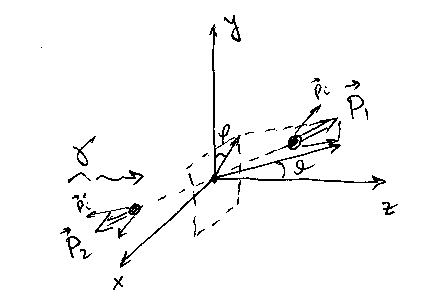 Neutron energy spectrum in the FF rest frame was taken as

and neutron angular distribution in the FF rest frame was isotropic. Momentum of the neutrons was calculated as follows 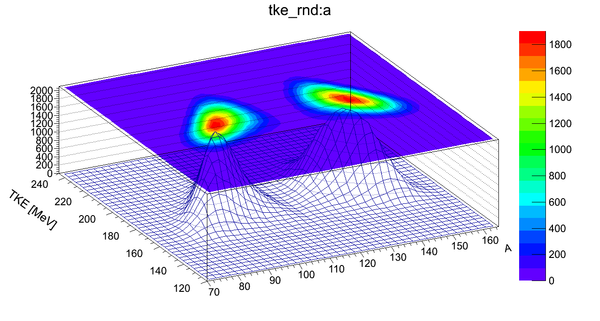 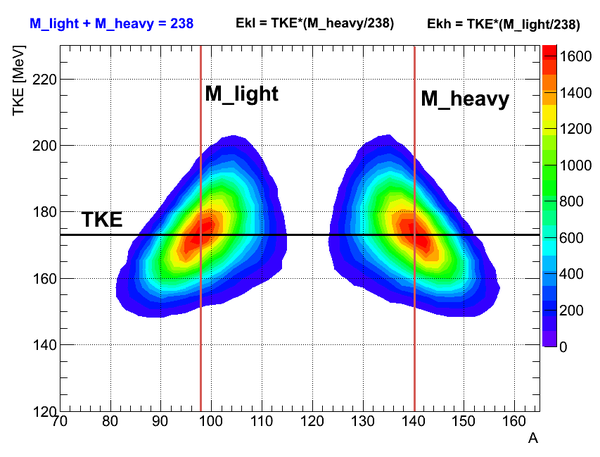 Angular distribution of the FF in the lab frame W(Theta) = a+b*(Sin(Theta))^2. Photon beam is not polarized hence there is no azimuthal anizotropy. 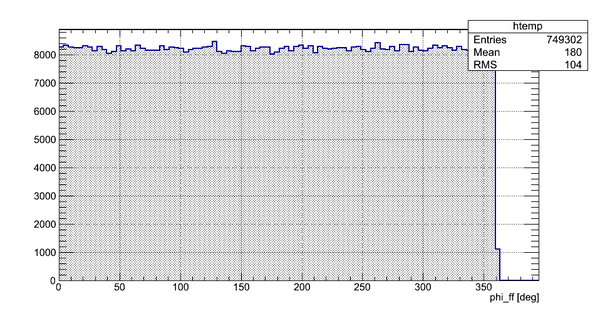 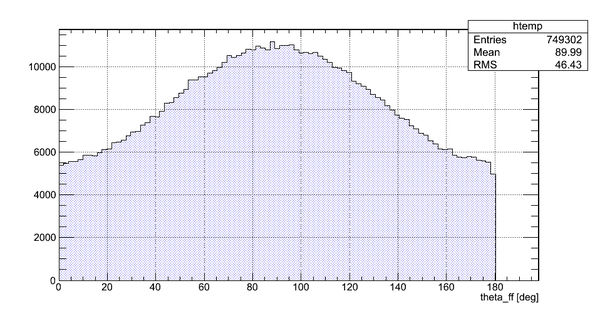 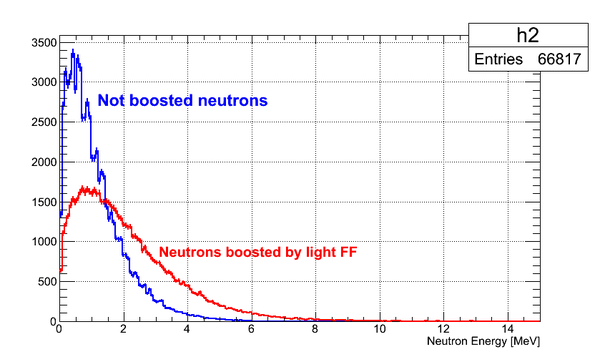 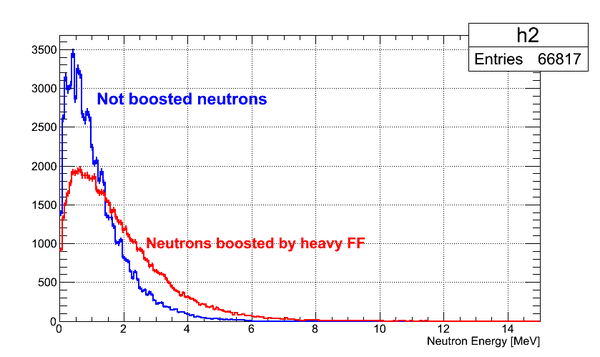 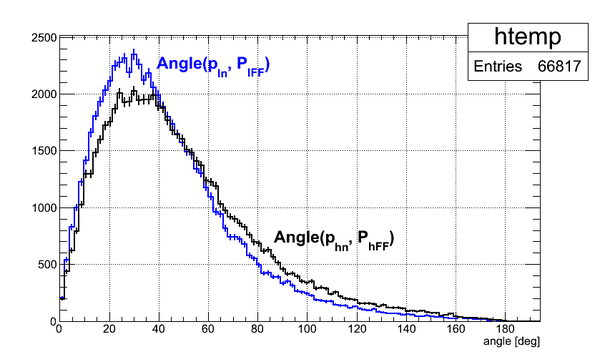 The angle between boosted neutron momentum and photon beam (z-axis) is plotted for neutrons emitted by heavy FFs and by light FFs. 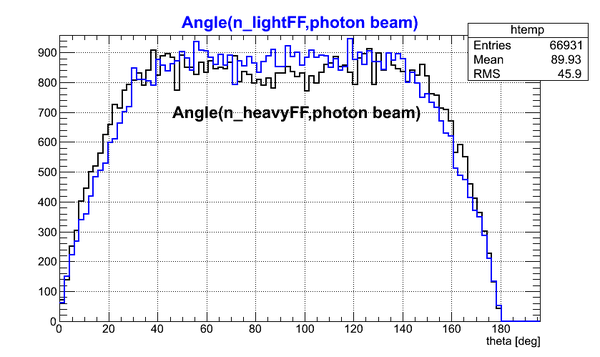 Next we considered the multiplicity of the neutrons emitted by each of the FF and got the following results. The neutron multiplicity for each fission event was equal 2.0 .

For the neutron multiplicity distributed between FFs in the following proprtion 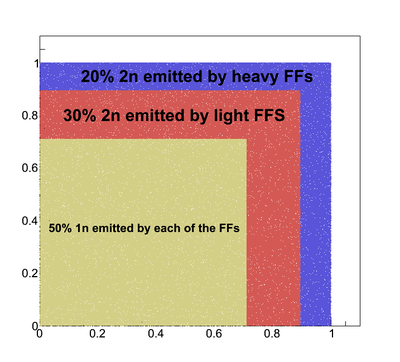 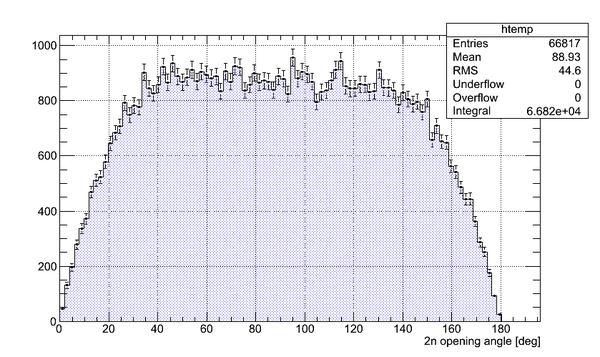 After phase space effect removal we got the following 2n opening angle: